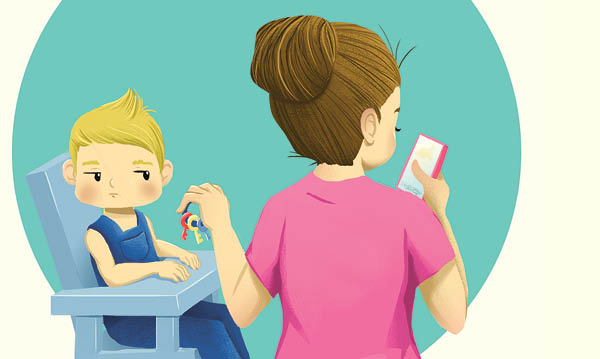 Your baby is stacking blocks on the living room floor. Are you (A) helping her stack them or (B) thumbing through emails?

If you answered “B,” it’s time to put down the phone and pick up a block. Or simply be more engaged, according to a study from Indiana University, which recorded and tracked children’s gaze during free play involving 36 parent-infant pairs. The researchers found social interactions like this actually influence a child’s ability to hold attention.

“Infants extend their sustained attention when a parent attends to the same objects,” the study notes. So if you’re not engaged, your tot can lose interest fast.
The findings are no surprise to Kate Cryderman Cole, early childhood studies program coordinator at Macomb Community College in Warren.

“Children like to know that somebody is watching them – they like to connect,” she says. Kids can go for a long time without your attention, but they want full attention when they touch base with you. So if you’re on your phone or distracted, that’s going to impact the child.

In addition, parents model behaviors for kids, says Staci Belanger, early childhood clinical program manager at Development Centers in Detroit: “Being engaged and being a part of the activity” is imperative. “The primary caregiver is kind of the baby’s world. That’s the foundation that the child learns from – that’s where the attachment comes from.”

And, while it’s not always easy to fit in, some quality playtime will positively impact your child’s development.

Without realizing it, kids develop a number of skills during play – many of which prepare them for their first years in school. “Play is important because it’s the foundation of all learning that we’re going to have,” Cryderman Cole says.

It’s fun, too – while encouraging initiative and problem solving.

“Also, when they’re playing, they are using representation skills. That block isn’t a block anymore. It’s a phone,” for example, Cryderman Cole says. That skill – turning one object into something else – lays the foundation for reading. Counting and sorting toy cars helps with math. “They might sort in a way that doesn’t make any sense to us. It’s always nice to say to a child, ‘What’s your sorting rule?'” she adds. Kids love to make these sorts of rules and classifications.

Start off by setting the phones aside. “I think when kids see you intentionally putting away some of the devices, intentionally blocking out other kinds of stimuli, that helps,” Belanger says.

A few other tips? Don’t push children to play with certain toys. In fact, the study notes that doing this – vs. letting them explore – also negatively affects attention span.

“A lot of the parents were really trying too hard,” study leader Chen Yu said in a press release. “They were trying to show off their parenting skills, holding out toys for their kids and naming the objects.” But the kids’ eyes were looking elsewhere.

“We have to think about it as adults,” Cryderman Cole says. “If someone tries to push us to do something, we push back.” We don’t do what we aren’t interested in doing, so we can’t expect our kids to do that either.

That’s why child-led play is so important, Belanger says. It’s called scaffolding. The child picks the blocks to play with and, as the child builds, you try to do something that increases the progress. “(It) helps them build confidence and they need some choices, especially toddlers.”

There are many ways to extend play. If your son is playing with a box, for example, Cryderman Cole suggests handing him some markers to draw on it.

And remember, it’s about quality over quantity, Cryderman Cole says. “It doesn’t have to be a lot. It’s just spending some time in the minute with that child.”

How busy moms can really — and should — make time for themselves.
Read more
At Home