Should Kids Have Chores?

Fed up with nagging and pleading your kids to pitch in around the house? Here's why kids should have chores and how to get your kids to do them, too. 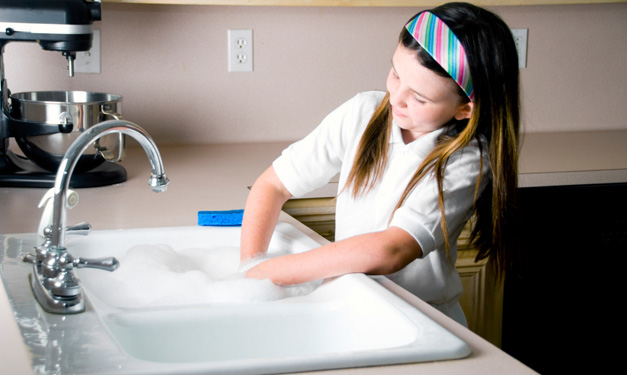 Back when most Americans made a living on the family farm, kids were expected to pitch in and work to ensure the family’s survival. As moms and dads went out to work in a knowledge-based economy, though, they adopted the belief that kids should be entitled to a life free from hard work.

While that has credence, it’s no wonder we’re at a disadvantage when asking them, for the millionth time, to help clean the dinner table or – shudder – their rooms. But chores have value. And there are ways you can get your kids on board.

A study in a 2003 issue of Child Development revealed that kids who cooperate and help others are unlikely to be aggressive later in life. Moreover, household chores teach kids important lessons about social responsibility, self-confidence, accomplishment and self-worth – and validate their role in the family, says Eric Beshears, a local family therapist.

Not to mention, many hands make for lighter work. “It’s amazing how much they help me. I never imagined the difference giving my kids chores would make in my life,” said Deanna Essayan of Howell. She recently started a chore schedule for her four kids: Gabrielle, Garik, Adi and Anto, ages 10, 9, 7 and 6 as of 2014.

“They needed to understand the value of a dollar,” she explains. “If they wanted that video game, they learned they’d have to work a month to get it. Sometimes, they decided they really didn’t need it after all.”

Some chores are just expected from all members of the family, such as making the bed, keeping one’s room clean and carting one’s dirty dinner plate to the dishwasher. Others are assigned and must be finished if the kids are to earn their $5 weekly allowance – like vacuuming and dusting.

The best time to start kids on a schedule of chores is as soon as possible: around age 2 or 3, Beshears says. “Little ones want to be like their parents. They are willing and eager to help, and eventually it becomes like second nature.”

Making sure kids do what’s expected is a key parenting issue. “Inconsistency breeds behavior you don’t want to see,” Beshears notes. So if a child doesn’t complete chores as expected, the consequence should always be the same – whether it’s docked allowance or lost TV time.

And it helps you, too: “Parents become like umpires, calling ‘out’ or ‘safe,'” adds Beshears. “There’s no longer a need for nagging or lecturing.”

Tracey Stulberg, a Birmingham marriage and family therapist, agrees that every child, no matter what age, should be expected to pitch in. “Even the littlest ones must learn that if each team member doesn’t fulfill a certain role, the team falls apart,” she says.

Stulberg recommends choosing chores that make your child feel needed and important. “Teach your child what I call the ‘minimal basic requirement,'” she says. Show what the job entails, and what it’ll look like when complete.

And if it meets MBR, don’t redo it. Studies have shown when parents are too controlling, this may inhibit kids from developing important abilities – and reinforces to kids that they lack competence.

Jan Heidrich of White Lake Township makes lists for two kids, ages 13 and 20, as of 2014. “For each chore, I would tape a checklist inside the cupboard,” she says. These job explanations are all over the house. One, above the automatic dog feeder in the garage, says, “If the dog food spills onto the floor, please pick it up.”

How much should your child be doing? Depends on age and interests. Keep in mind that schoolwork and extracurricular activities are “chores,” too. “You’re looking for a balance,” Stulberg says. “If you give them too much, they’ll just stop. Not enough, you don’t challenge them.”

The consequences of not doing chores should be tailored to the child’s age and tastes, too. Just ensure the punishment fits the crime.

“You’re always going to have to remind them to do their chores,” Stulberg says. “Unfortunately, you never know if your children have learned their lessons well until they grow up.”