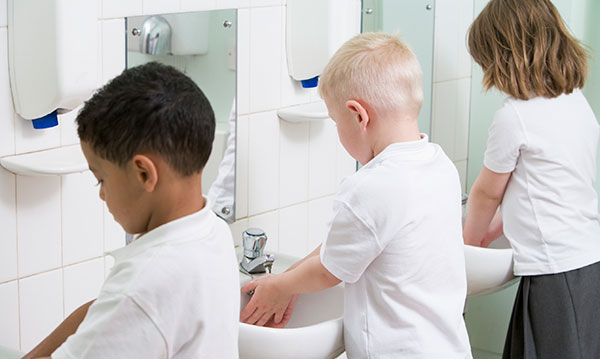 Potty training is hard work for parents and kids, but once a child has mastered the basics, it’s time to move on to bathroom etiquette. Besides washing their hands, parents need to make sure kids know what to do and what not to do when it comes to public restrooms.

Will Ferrell plays Buddy the Elf in the Christmas movie Elf. Buddy’s life at the North Pole was elf-sized. When he goes to New York to find his father, a simple trip to the bathroom becomes an eye-opening experience. The extremely tall elf looks over the bathroom wall and proclaims, “Have you seen these toilets? They’re ginormous.”

While this isn’t acceptable behavior, there is no way for the previously-sheltered Buddy to understand the rules of the bathroom, much like small children. Moms and dads are tasked with teaching their kids how to act and how to keep themselves safe in public restrooms. Kids don’t seem to understand that stall doors aren’t soundproof, not everyone cares to know about their bodily functions and they will not be sucked in by the automatic flushers. Lisa Riviera, a Macomb mom of two and pediatric nurse, has tips for getting kids used to using public facilities.

Riviera suggests telling kids to be respectful of those around them. Whether at a urinal or in a stall, the kids should be taught to do their business and move on. There is no need to look under the stall walls or over at the next urinal.

One place where parents can ease the potty process starts with the complicated paper toilet seat covers. It turns out, they aren’t necessary.

“That’s because toilet seats are not a vehicle for transmission of any infection agents – you won’t catch anything,” Dr. William Schaffner, a professor of preventive medicine at Vanderbilt University Medical Center, told the Huffington Post in 2014.

Riviera says she always encourages kids to use their foot to flush the toilet rather than grabbing the handle. Between contaminated hands and the germs sprayed by a flushing toilet, Riviera says if it’s at all possible, contact with the flusher should be limited.

Many children are afraid of the automatic flushing toilets. Often, the sensors are touchy and even a child leaning forward for a piece of toilet paper can trigger the flush. Not only can it be scary, but it can feel strange as well, especially if it sprays water back up. There are suggestions online to avoid the premature flushing, such as using a Post-it note to cover the sensor.

Elizabeth Pantley, author of The No-Cry Potty Training Solution: Gentle Ways to Help Your Child Say Good-Bye to Diapers, was part of an article about children scared by automatically flushing toilets in the New York Times in 2007. She says parents shouldn’t make a big deal about the flushing and downplay it to the children to keep their fears at bay. She suggests that parents could also help their children understand the flushing process by visiting a plumping supply facility.

Before they flush, it’s important to lay down some ground rules for the kids.

Always wipe from front to back

In an article in Parents magazine, Scott J. Goldstein, a pediatrician at The Northwestern Children’s Practice in Chicago, says children, especially girls, should know to wipe themselves from front to back. He recommends using a doll to demonstrate the process to children.

Riviera says parents should make sure that children also know how to wash their hands.

“One of the things we’ve taught children was to sing their ABCs or the Happy Birthday song while washing. Both of those songs run about 20 second and that’s how long it should take them to wash their hands,” Riviera says. She says to avoid the germs, kids should be taught to use a paper towel to turn on the faucet, then get the soap, wash and turn off the faucet with the towel. She suggests teaching them to use the towel to open the bathroom door when leaving as well.

All of the steps to properly using the bathroom can be tough for younger children so parents should accompany them until they are able to complete the process by themselves. Sometimes this means boys must use the women’s restroom and girls still need to go into the men’s room with their dad.

“For little boys going into women’s bathrooms, it’s different because there are stalls for them to go into and women are in stalls, not using urinals,” says Riviera. She adds that her husband would often cover her daughters’ eyes when he had to take them in men’s rooms with urinals. “If you have a little boy or girl who is afraid to go in alone, I wouldn’t push it. They get used to going on their own at school so they will become used to using public facilities over time.”

No harm in holding it

Some parents drop everything the second their child mentions needing to use the facilities, but Riviera says it’s not always necessary to run to the bathroom.

“As a nurse and a mom, I’ve never really noticed a problem encouraging kids to hold it. Obviously if they are little, like 3, 4 or 5 years old, you have to take their word for it and get them to a bathroom, but for older children, it’s not a problem to wait,” Riviera says. She says she has heard people mention urinary tract infections or bursting bladders, but waiting to use the bathroom once in a while will not cause major problems. Bladders won’t burst, she adds.

Teaching children to use public restrooms can be tricky, but with proper guidance, they will be using the bathroom by themselves in no time, she notes. And moms and dads will one day miss the silly bathroom conversations and fidgety, song-singing little kids on the seemingly endless trips to the restrooms.