Evrod Cassimy of Channel 4 gives the scoop on his TV job, exploring his home and balancing it all with being a father. 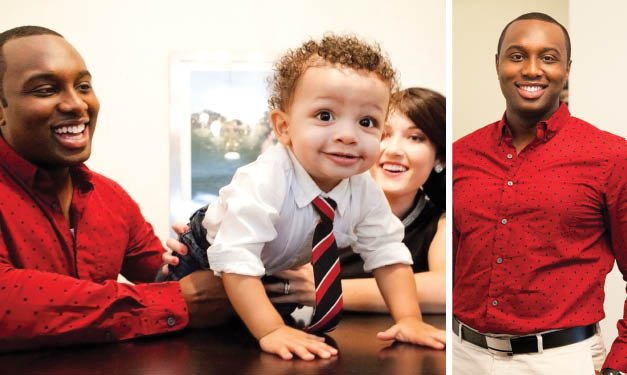 For Evrod Cassimy, telling stories has been a longtime dream. Now, as a Local 4 News Today (WDIV) anchor, he’s living that dream – and working on a new chapter of his own story.

Cassimy, who was 29 at the time of this interview, is awake before some people go to bed, ready to bring metro Detroiters the latest news. But when the cameras are off, he’s spending time with wife Danielle and their son, Malakai, who was 1-year-old at publication.

In August of 2013, the family packed up their Denver home and moved to West Bloomfield for Cassimy’s new gig on WDIV’s morning show.

“Detroit was just an interesting city,” Cassimy says of taking the job. “It’s a city that I had never been to, so forget what you might have heard; you need to see it for yourself. And when I saw it for myself, it was everything that I had hoped it would be and more.”

But Cassimy is no stranger to the Midwest – or Michigan. He was born in Berrien Springs, on the west side of the state. His family moved to Rockford, Ill., where he grew up. By 18, he was living in downtown Chicago, attending Columbia College for TV broadcast journalism.

“It was so much fun,” Cassimy says. “Best four years of my life – other than being married.” His first journalism job was in Colorado, where he met Danielle. When he moved to Wisconsin, the couple dated long distance. Once engaged, they moved to, and wed in, Orlando, Fla.

The next stops? Richmond, Va., where he worked as a full-time anchor for the first time and nabbed an award for breaking news coverage. And then, of course, Denver. Here, his reporting on major stories earned him three Emmy nominations.

“There’s different things that I’ve taken that I’ve loved from every single one of those cities,” he says. Now, “(I’m) really looking forward to exploring Detroit.”

For Cassimy, journalism has been a perfect career match.

“I always knew that I wanted to write. I’ve been singing since I was a kid in church, and as I got older and kind of understood life and the world, I was kind of able to write my own songs,” he says. His mom, seeing her son’s passion, encouraged him to try broadcast.

“I still love every aspect of it,” Cassimy says, “from the minute I had my first journalism class to today, being able to tell stories here in Detroit.”

But it isn’t a breeze. In his seven-plus years of experience, some stories stand out for Cassimy. Like the 2012 Aurora, Colo. shooting, which he covered.

“Watching that parent find out that the reason that they can’t talk to their child is because their child was laying on the floor in the theater,” he says, “just watching them break down, it was the most difficult thing I’ve ever seen.”

Now that Cassimy is a dad himself, it’s had an impact on his reporting, he says – especially tragic news involving kids. “I’ve heard people say that they could tell the difference in my writing from before I had a child to after,” he says. “There is a difference. You feel for those stories even more.”

He’s also awake in the middle of the night – but not for the reason most new dads are. Cassimy’s alarm goes off at 1:30 a.m., signaling the start of his workday.

And while he’s on TV, Danielle and Malakai like to tune in. “The best part is, now that he is the age that he is, he recognizes dad on TV,” Cassimy says. He’s excited when dad gets home, too. “He wants to rush over and crawl to you – or he’ll try to walk and then face-plants,” Cassimy cracks. The free afternoon time he has for father-son bonding is one of the morning shift’s perks, he adds: “I get to be here to watch my son grow up.”

So far, fatherhood has been exciting. “People say, ‘Oh, it changes your life forever,’ and that used to scare me,” he says. But, he figured, “Well, there’s no other way to find out than to have your own child.”

Since living here, the Cassimy family has been exploring Detroit’s suburbs, from restaurants to the Franklin Cider Mill and The Somerset Collection. Adjusting hasn’t been too difficult thanks to his co-workers – and the community.

“Everywhere we have gone, people will come up and welcome us to Detroit, and I feel like Channel 4 has been kind of the center hub of that,” he says. “Everyone has been completely welcoming.”

See Cassimy at work – bright and early! He’ll give you the scoop on the latest stories on Local 4 News Today before you start your day. Tune in 4:30-7 a.m. Mondays-Fridays on Channel 4 WDIV.

This article originally appeared in a November 2013 issue of Metro Parent.