Families Unplug for One Week in Screen-Free Challenge

Three local families forgo their tablets, TVs, computers and smartphones for one week. Find out how they fared and whether you could go screen-free like them. 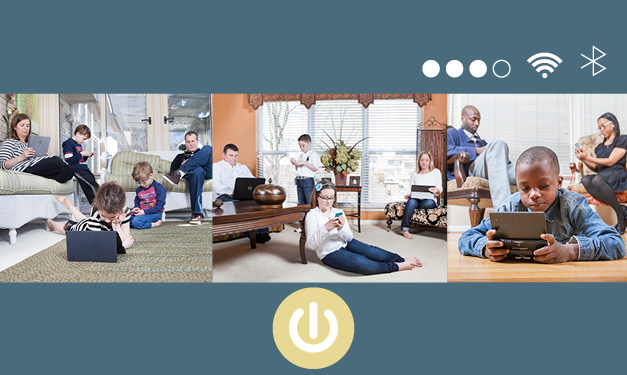 Imagine giving up all digital entertainment for a week. No Xbox. No Netflix. No smartphones. Not even network TV. Would you do it? Could you?

We rely so much on media to keep us busy, we may not even realize how often we’re tuning out of real life. It can quickly become a mindless addiction … texting at dinnertime, compulsively checking email, turning every family outing into a status update.

According to the Campaign for a Commercial-Free Childhood, screen media dominates the lives of far too many kids, displacing other activities integral to childhood like reading, playing, creating and daydreaming.

Thinking of going screen-free? Here are five tips for taking the challenge with your family.

The CCFC says excessive screen time has been linked to poor performance in school, childhood obesity and attention problems.

To combat the negative effects of digital overindulgence, the organization sponsors an annual Screen-Free Week celebration that asks families to unplug everything except essential work and school activities for seven days.

In anticipation of 2014 Screen-Free Week, which is May 5-11, we asked three Metro Parent families to go on a digital diet for one week in March. All three families depended on screen entertainment in their own unique ways and found giving it up to be difficult but enlightening.

A mid-week snow day off school made the experience even more challenging – and even led one family to give up and plug back in early.

We hope their stories inspire you to take the Screen-Free Week Pledge, or at least more closely analyze how media impacts your own family.

The Martin Family of Northville

Claire’s screen time has been limited, but she recently got an iPad and has become hooked on Instagram. Amy worries it may affect her daughter’s grades. Alexander loves his Xbox and joins his cousins in multiplayer games, communicating with them through headphones as they play. The kids also have a Surface tablet. The Martins recently installed a second TV in their home and watch shows together a couple times a week. Amy enjoys Facebook and entering online contests – and takes her smartphone with her everywhere. Bruce, who owns an insurance agency, stays plugged in at all times for his customers.

The night before the challenge, the Martins talked about their feelings and plans for the week ahead. The challenge was met with the most protest by Alex, who tried to get out of it.

From Day One, the challenge was easier than expected.

The Martins read, played the Othello board game and baked together. Family dinnertime stretched out longer and they chatted more.

Bruce taught Alex to play chess instead of bonding over their usual TV shows.

The kids played in the snow, constructed a fort and had friends over to play.

When the kids knew video games weren’t an option they didn’t ask a single time, finding other things to do. The downside?

“My house was trashed,” Amy says. “I was stepping on Legos for a week.”

Overall, Amy says she felt more in the moment because she wasn’t compelled to constantly check her email.

“I noticed I am not ‘needed’ as much as electronics make me feel like I am,” Amy says. “You can give people your full energy.”

Amy closed her computer and put it away in a drawer, so she wasn’t tempted to check emails. She left her smartphone at home while doing errands.

Bruce turned off his phone in the evening and realized much of his work could wait.

The Martins discovered they can enjoy family time in other ways.

The Martins had a family meeting about how to use the knowledge gained during the challenge.

Bruce wants to keep screen-free dinners, and Amy vows to limit her own online engagement.

“I am going to continue to work on being present with my family without distractions,” Amy says.

They hope their children will make better decisions on their own when it comes to using media.

“You can always add more technology to your family,” Amy says. “It’s harder to take away.”

The Lovy Family of West Bloomfield

Jen admits to checking Facebook frequently, while Jon, a doctor, likes to unwind in front of the TV after a busy day. He sometimes plays iPad games or researches his hobbies online.

Noah got an iPod for his 7th birthday, which his parents use to incentivise good behavior and punish bad behavior. He’s supposed to stay within an hour of screen time per day, two on weekends – but this doesn’t include watching a nightly show with dad. He is constantly negotiating for extra screen time.

Noah was recently upset because he was the only child at a sleepover without an electronic device.

Evan asks for the iPod almost every morning when he wakes up. He is autistic, and for him technology has some positive effects – giving him a common interest with his peers and distracting him at mealtimes, so he will eat more.

Jessica is least dependent on media, but is following her brother’s lead and playing tablet games more and more frequently.

There was nervous energy throughout the house the day before the challenge began. Jen actually had nightmares, even though she was eager to participate.

Jen missed being able to use electronics as a babysitter. Both Jen and Jon exercised less because they normally watch TV or the iPad during workouts. Jessica missed her favorite TV shows, Noah missed playing Roblox and Evan missed his iPad.

Finding alternatives to technology went more smoothly than the Lovys thought, and they spent more time together as a family. The kids were eager to get their hands on new art supplies bought specifically for the challenge and made scrapbooks, painted canvases and baked cookies.

The siblings actually learned to get along better and play cooperatively instead of abandoning games for technology if a disagreement arose.

Jen says, “When we’ve cut back on it, they really don’t miss it.”

The Lovy family plans to have unplugged days on a regular basis and technology-free weekends once a month. Jen has deleted Facebook from her smartphone.

“The key for parents is not to cave into a child’s request to watch TV or go on the computer,” Jen says. “They really can survive without it, and they will not die of boredom. It’s been really fun to see creativity creep back into our house.”

The Oatis Family of Detroit

Jordan watches cartoons on Netflix and Hulu Plus and loves Disney shows. He plays games on a Nabi 2 tablet made especially for kids. Normally Jordan is allowed screen time in the morning after he’s made his bed, gotten dressed for school and packed his backpack. He also gets screen time after school once his homework is done. There’s no TV after 8 p.m., which is Jordan’s bedtime.

Donald mostly watches news and sports on TV, which he has a tendency to leave on as background noise, while Allia’s guilty pleasures include celebrity websites, online quizzes and Instagram.

When Allia announced to the family that they would be participating in Metro Parent’s Unplug Challenge, her husband thought she was joking. He agreed in hopes the family would find more time to connect. Jordan, however, was not happy.

For Allia Oatis, the challenge was a lot tougher than she thought, and made her realize how often she compulsively checks Instagram, emails and texts.

It was also hard to keep Jordan busy. The family recently moved to a new home, so he doesn’t have playmates in the neighborhood. Many of their board games and toys were still packed in boxes.

“The first day we started, I will admit it felt like the day was longer because we didn’t have those little fillers,” Allia says.

Ironically, the family spent their first evening mounting a flat-screen TV on the wall of their new home, even though they couldn’t watch it.

On the fourth day, when Jordan’s school was canceled due to snow, Allia was forced to work from home. She tried to find ways to keep Jordan occupied, but eventually caved.

“He had read books, drawn pictures, done cutouts, played with the dog. I didn’t have anything else for him to do,” Allia says. “I hit the wall.”

When Allia told Jordan to turn on cartoons, he brought up the challenge.

“My son said, ‘But Mommy, we can’t watch TV, so we aren’t doing what we said we were gonna do.’ Children are the mirror,” Allia says. “So I told him, ‘But we also promised we would be honest about what happened and that’s what we’re going to do.'” With that, she texted her husband and called off the challenge.

Overall, Allia says her family focused more on each other once the distractions were taken away, and recommends others try their own digital diet to pinpoint how much they use technology as a crutch.

“People say ‘Oh, I’m not addicted’ – until you take the screens away. The moment you take them away, you realize how much you use them,” Allia says. “It’s the only thing you can think about.”

Allia says the family plans to turn off the TV during dinner and may consider unplugging for shorter time periods.

“A week is too long. I think a day here or there would be useful,” she says.