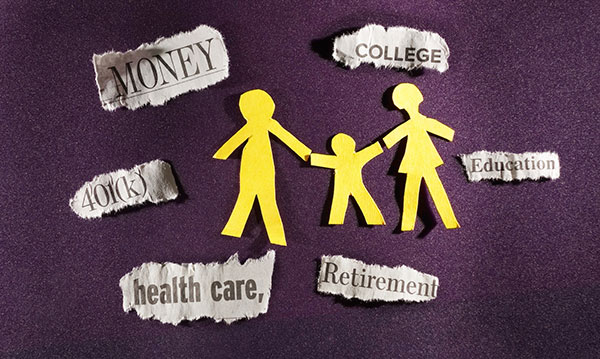 “You have to have purpose with your finances. That forces you to have goals. It’s an overarching process,” says Neaton.

It’s not always about paying off debt. Sometimes families are trying to bulk up savings accounts, plan retirement or invest money. However, it’s difficult to know where to start. Neaton shares some tips for putting family finances on track in the New Year.

Talk to a professional

Neaton recommends that all couples looking to set up a household budget and make difficult financial decisions meet with a financial planner.

Neaton recommends finding a professional who is concerned about the goals rather than selling products.

“You want to start out having a conversation about goals and where you want to get financially. Products come out of that, but the financial planner should be concerned about what you want and how they can help,” says Neaton.

Neaton says financial planners will help put topics in emotional and practical terms, which can help couples relate to the topic and each other.

“Start a budget. For the first month, put every dime on a piece of paper. Give every single dollar that comes in a name. Put every cent into a category. You want to make sure you know where every penny is going and charting it out on a budget is the best way,” says Neaton. “Spend every dollar on a piece of paper before the money comes in.”

When it comes to making the budget, Neaton recommends that the more analytical one in the couple starts it out.

“If you wait for the non-analytical person makes the budget, it’ll never happen,” says Neaton. “There also have to be some rules for that. For example, if one person sets it up, the other person needs to be able to offer up changes.”

“I encourage everyone to go to Google and type in ‘zero-based budget plan.’ Find one of the budget forms and tweak it for your personal situation,” says Neaton. He also recommends the website Everydollar.com. He says it illustrates where money is spent and can really help make the budgeting process easy and eye-opening.

Neaton says the overcoming debt can seem impossible, but realizing that it won’t all happen at once makes it easier.

“It’s all baby steps. Couples need to say ‘we’re going to make one change this month and another change next month. You have to eat an elephant one bite at a time,” Neaton says. “That’s why it’s important to put a purpose to it. With purpose, you’ll feel like you are accomplishing more.”

Know when it’s a deeper issue

Money is one of the largest sources of tension between couples, but it can also signal deeper issues, it’s important to know when to seek counseling and professional help.

“If the couple isn’t cooperating, there could be a larger marital issue. For example, if it’s really important to a wife to get life insurance to protect herself and the kids should something happen to her husband and he doesn’t agree, that’s not really something a financial planner can force the couple to do. At that point, it’s probably going to require counseling,” says Neaton.