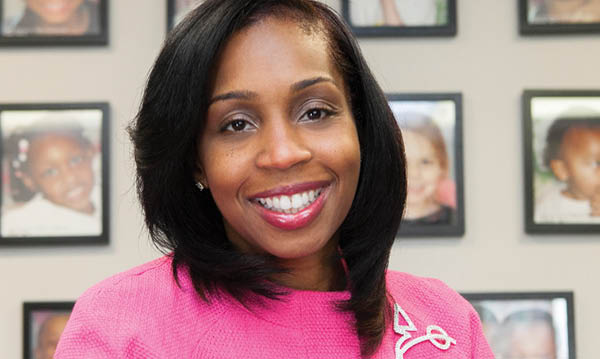 Monica Duncan has always wanted her life’s work to make a difference in the lives of people in the community.

“But for me, that’s been in different areas of work,” explains Monica Duncan, the state director for First Children’s Finance.

The Detroit native obtained her bachelor’s in psychology as well as a minor in social work from Florida Agricultural & Mechanical University. Duncan, who also received her master’s in social work with a specialty in development, implementation and evaluation at Wayne State University in Detroit, made sure all of her career paths were aligned with her mission.

Before FCF, Duncan worked for the mentally ill population, helping them to become healthier psychologically at the Neighborhood Service Organization for one year. Then, as a manager for a project called Family First at Black Family Development, she focused on ensuring the children living in homes where Child Protective Services were called were safe and healthy. From there she focused on helping the homeless population become more stable, independent and integrated back into society as healthy citizens at South Oakland Shelter as the executive director for eight years.

“So the core of what I wanted to do in terms of improving quality of life based on the demographic has been consistent,” says Duncan, who has been an adjunct professor at Baker College for the last three years. “The matter in which I’ve done that has been varied, which I think for me has been really exciting because it’s given me various avenues and journeys to kind of do my work. And to learn and progress myself.”

Seven years ago, Duncan embarked on another journey: Working in the business side of child care at FCF. The work of FCF is to stabilize, improve and expand child care businesses serving low- to moderate-income families so that children start with a “wonderful, early education experience” and are prepared for kindergarten, says Duncan.

“It gave me the opportunity to do some of the things that were at the core of my expertise: program development, implementation and evaluating the success of the work,” says Duncan, adding that the early education portion was something she had to learn.

Duncan says improvement and expansion doesn’t happen overnight. FCF programs run from one to three years. One of FCF clients, Little Scholars Child Development Center on Grand River Avenue, has been working with FCF for five years. Duncan says the executive director, Shirley Wright Hailey, had one center and was getting ready to close but, after going through several programs, Wright Hailey, opened another center in Brightmoor and soon another in North End, which will be opening in a few months.

According to Duncan, many child care providers go into early care and education because they love children and they are passionate about them, but not many have business acumen.

Duncan says the organization not only helps businesses become healthy and thriving; it also helps women in leadership roles.

“They are developing their leadership, so that they know the value of their work in early care and education,” says Duncan. “That’s the other thing that I think is really exciting and important to our work: The leadership growth that happens in business owners through the process of our program.

“So not only are you people who are passionate about loving children, but you are women in the community who add economic value. You employ people,” adds Duncan. “You also permit parents to go to work and be productive because they are not worried about their children because they know they are in a safe environment.”

Duncan was never in an early child care program. Her grandma taught her the basics at home. Still, she feels that every child needs what she had at home and a structured program.

“Research says that it is so important, because of brain development, to share as much information with (children) in a strategic manner. It lays the foundation for the ability to excel in academics,” says Duncan. “But the other thing is children strive based on affection and touch. So it’s important to have both.”

Duncan adds that parents must choose child care centers and family providers with “research and evidence-based curriculum that’s really focused on strategies that prepare the child.”

FCF typically doesn’t share a list of the child care centers and providers that they have worked with because their targeted population is teachers and directors. For parents wanting to find a quality early child care and education center, Duncan recommends Great Start to Quality, where parents can search for centers and obtain information about them like their rating on the Great Start to Quality grading and improvement system. FCF also uses this site to track improvements for their clients.

Duncan says FCF and Great Start to Quality do not have a contractual relationship, but they are “community partners – both committed to wanting to make sure the children in our community have a quality early care and education experience.”

For excellent options in Detroit and beyond, Duncan suggests Great Start to Quality, which rates early child care facilities. Call 877-614-7328 or visit greatstarttoquality.org.