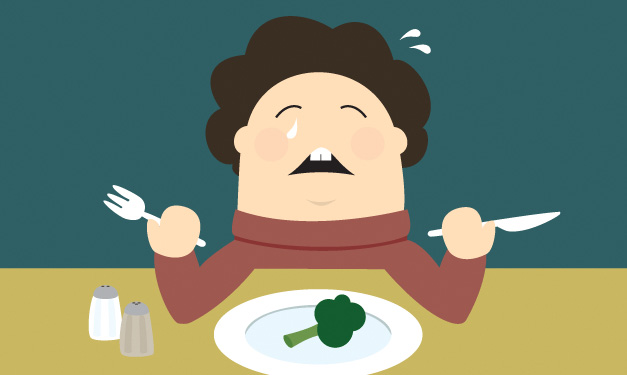 It's dinnertime and you place an unfamiliar dish in front of your child. He or she says, "It smells bad, it looks funny and I don't want it." Sound familiar? For some kids, trying something new is the equivalent of getting a shot at the doctor's office: painful and totally unwanted. So when it comes to getting your child to broaden those food horizons, follow these five guidelines.

1. Be a nutrition role model.

Apply the "lead by example" method here. Remember that your children look up to you, and if they see you eating nutritious food, they'll want to try it, too. Show your kids that it's important to eat healthy and that they shouldn't shy away from it because they're afraid to try something new. Plus, by making the effort to eat a food you dislike, you're showing that even if you don't like something the first time you eat it, it's important to try again.

If you stick a huge portion of broccoli in front of your children and expect them to eat it, you've made a bad decision. For one thing, serving large portions may lead to unhealthy eating habits – especially when you force your child to eat the entire plate. Start with letting them try one bite. If they like it, give them a small portion. If they don't, try again next time. It might take 10 to 15 tries before kids start to like a particular food!

If your kids like pizza, try adding broccoli as a topping – or let them put peanut butter on celery. By combining new things with foods that your children are already familiar with, it might be easier to sneak some healthy additions in.

4. Recruit their help in the kitchen.

By making your children a part of the cooking experience, they can become more familiar with new foods, their textures and smells. Giving them the chance to assist in preparing their dish is almost like letting them build something: They'll always be curious as to how it turned out, and as a result, they'll want to eat their culinary creation.

Still stumped? Encourage your child to play with his or her food using a clever device like Food Face plates. Reminiscent of those old "Wooly Willy" magnet-facial-hair novelties, your picky eater will have fun moving the green beans or carrots around to make different faces. If kids are entertained by their meals – in addition to feeling different food textures – they might be more interested in how the food tastes.