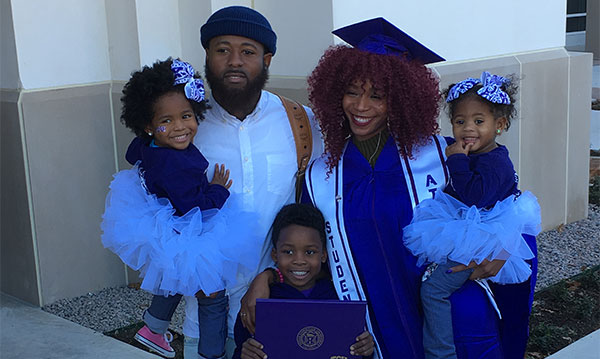 Note: Jeremy Kerley was traded to the San Francisco 49ers in late August 2016. Metro Parent chatted with the former Lions player before his move.

Seeing dad on TV is no big deal for Jeremy Kerley’s three kids.

In fact, a lot of cool things about life with an NFL dad have become the norm. Things like riding on airplanes, traveling the country and having a father who gets stopped for selfies.

But for Kerley, who joined the Detroit Lions this year as a wide receiver? He’s still reveling in it all.

“It’s still crazy to me. I’m like, dang, I never really thought I would be on TV,” laughs the 27-year-old Texas native. “What the norm to them now is like, it’s crazy. My son, he’s been on more flights than I have.”

It’s especially wild when you consider that Kerley didn’t plan on a pro football career.

“I never had dreams of playing the NFL. I was a baseball player,” he says, even getting baseball scholarship offers before taking a football offer with Texas Christian University. He met his wife Kristal there on the first day of his freshman year – he saw her and immediately told his friend, “That’s going to be my wife.”

Kerley was drafted by the New York Jets in 2011 and signed a one-year deal with the Lions in March.

New to the city

Now Kerley is adjusting to life in the Detroit area while Kristal and their children – football-loving Dae’shone, 7, and “girly girls” Y’Manni, 3 and Ma’liyah, 2 – hold down the fort in Texas. Being apart is tough but moving the family wasn’t practical.

“I don’t want to take my son in and out of school,” he explains. Modern technology helps them stay close. “I think the best thing that was invented was FaceTime. I get to see my kids every day. They still get to see their dad. I try to not to go an hour without talking to my kids.”

His mother-in-law lives with them (“She’s a major help,” Kerley says) and Kristal’s support goes a long way. “I married my best friend,” he says. “Anything that I’m into, that I put my time and effort and heart into, she supports 100 percent.”

Being a role model

Kerley says he loves the chance to interact with his fans and be a role model.

“I always look at myself as a role model anyways,” he says. “Every time I’m out in public and somebody does recognize me, I realize it’s an opportunity for them to have a life experience they never had. When I was a kid if I seen Michael Jordan, I would want that experience. I would talk about that forever. I wouldn’t deny anybody that experience.”

Plus, “I feel like it’s my job to kind of give back and talk to kids and help them out in any way, give them an insight or a vision.”

“My son is a beast at football,” Kerley says of Dae’shone. “He’s gifted at it.”

And despite his preference against his son playing football, he says it’s not his choice and – like his own parents – he would never push his kids either way.

“Sports came natural,” Kerley says. “They didn’t have to push me to do it. I was already pushing myself. That’s exactly how I am with my son.”

He believes parents shouldn’t try to live vicariously through their children.

“Don’t live your vision through your kids. If you’ve been that type of person, your kid doesn’t have to be that same one,” he says. “Let them find their own identity.”

Kerley says he and Kristin are “definitely laid-back” while instilling goals and boundaries. “I’m a friendly dad but I’m not your friend,” he says. “I want my kids to be able to come to me and talk to me about anything.”

At the same time, “they’re kids,” he says. “Kids are kids. They’re gonna mess up. That’s almost like their job right now. That’s them trying to find themselves.” It helps, too, that Kerley says he’s “the biggest kid” himself.

“I’m always coming up with crazy stuff to do,” he laughs. “I’m a last-minute type of guy, so we might wake up and had a plan to go do this or do that, I’ll just stop all that and say ‘Let’s go hit a theme park.’ Jump in the car and drive there.”

They did just that about a year ago in Texas, driving hours out of the way to pick up the kids from different family members’ homes and heading out to Schlitterbahn Water Park.

“There’s always something that keeps my kids excited and on the edge. It lets them know that their dad loves them,” Kerley says. “We always try to keep moving.”

Kerley’s clothing line JK11 is another point of pride, including a new line of jeans called DYM after his kids’ initials. He always dreamed of having his own brand and at one point he considered it as a career.

As for his season with the Lions – where he’ll be wearing the iconic silver-and-blue uniform and a big number “12” – Kerley is equally dedicated.

“I’m very excited,” he says. “This is kind of my year to bounce back a little bit and start having fun and start playing football again.”

And if you follow Kerley on Facebook, expect to see “yeeeen know” used often. What’s it mean?

“Basically, ‘yeeeen know’ is just like saying it’s the obvious. Like, ‘if you didn’t know that,'” he says of the term he coined. “I’m an originator.”