Friends Who Are Family 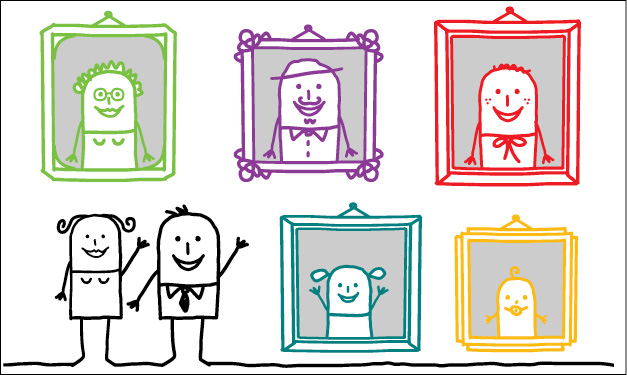 “I have a brother who lives less than an hour away who I barely speak to,” says Greer, a mother of two. “Sure, he and I shared parents, but we share little else. My real family, the people who embody that spirit of that word, are some dear friends I’ve had for years. These are the people I connect with, the ones who’d be there for me in a pinch.”

Greer says her best friend from high school, Annette Hastings, is like a sister to her. She knows all her stories, secrets, good and bad traits.

“She knows me better than my husband, truth be told – and he’d say the same thing,” says Greer. “She and I are so close, she means so much to me, that it kind of bugs me that I don’t have a better title for her. ‘Friend’ seems so small compared to what she is, and ‘best friend’ seems childish. We need to come up with a better word for friends who are family.”

“Drawing friends into the family circle is just the latest version of the old, time-honored extended family,” explains the author of Money, Sex and Kids: Stop Fighting about the Three Things That Can Ruin Your Marriage. “Human beings are social creatures; we don’t do well in isolation.”

So, if you don’t have a close relationship to your family, they live far away, or you simply don’t have family, friends can fill that basic human need for a close-knit group to lean on for support, laugh with and share life’s ups and downs.

The family you make

“Last Thanksgiving was one of my favorites,” recalls Julie Rose, a Royal Oak mother of three, a few years ago. Rose invited over a couple good friends and their children to join her for a laidback feast.

“Everyone brought something to share, so one person didn’t have to make the whole thing,” Rose remembers. The group of three families with a combined total of six kids sat around the dinner table, eating, talking and enjoying their time together. For Rose, who’s an only child and whose parents are both deceased, getting together with “family” means being with her friends.

Making a family out of a group of great friends is something that’s been done for years in the gay community, says Frederick Barnes of Royal Oak. He and his partner, Jonathan Davies, have been together for nearly 30 years.

“Jon and I both became pariahs in our families when we came out, and that’s not unusual,” says Barnes. “We’re among a lot of gay people who created their own family when the one we were born into turned their backs on us.”

To Barnes, family isn’t someone who you share blood with; it’s about the bond and the investment of time and caring.

For Sarah Sopchak of Novi, being far away from family prompts her and her husband to connect more to friends.

“We have spent the last five-and-a-half years traveling for my husband’s education – New York, Missouri, Ohio, Michigan,” says Sopchak. “We make new friends everywhere we go. Because our families are not here, we need our friends to be like family!”

Several years ago, when Sopchak moved with her husband to a small town of just 17,000 people in Missouri, so her husband could attend medical school, she wasn’t sure what to expect. Sopchak found that the town and the medical school had a built-in network of groups that students and their families could join. Add to that, she made friends through work.

The variety of friendships left Sopchak feeling welcome – even though she had no family nearby. “We’ve been lucky to make friends from other parts of the country and the world,” says Sopchak. Having lived in so many places, Sopchak notes that her friends have been invaluable for another reason: “They’re really important when it comes to moving day!”

For Rose, a single mother, her network of friends has developed over time through connections to her kids’ activities. As a young mother, she made sure to join the parent-teacher organization and to help out working at school activities so she could get to know other parents better.

She has two kids in soccer, which not only keeps her schedule full, but also ensures that she gets to see her friends (the parents of her kids’ teammates) on a regular basis. Rose laughs when she reveals another source of friendships – Facebook. Over the last few years, she’s reconnected with high school buddies and now keeps in touch on a regular basis.

Are friends better than family?

We’re preconditioned to prioritize family from an early age, but Tessina says that in many ways friends are more important to overall wellbeing.

“Friends can be objective,” says Tessina. “Your family has known you since you’ve been in diapers, while friends might have known you as far back as grade school, but it’s more likely that they’ve met you as an adult.” For these reasons, family members tend to make assumptions about you, about your behavior and your choices. Tessina points out that these assumptions are not always accurate, but they’re based on your shared history. With friends, the history is shorter and often less complex.

There’s a more obvious reason, however, that friends are sometimes better at offering advice and giving support – you picked them. “If you think about it, if you have someone who you don’t get along with, that person doesn’t tend to end up as your friend.” But with family, you don’t get to choose your relatives.

“It’s what I like to call ‘The Great Lottery of Life,'” says Tessina. “Just think about, it seems like we all have that one relative who’s always at get-togethers, maybe he drinks a little bit too much, he gets obnoxious, but he’s part of your family, you can’t get rid of him.” One of the big benefits to family, Tessina says, was the assumption that even in cases when you wouldn’t have chosen this person to be part of your clan, there is a loyalty, a belief and an obligation to be there for each other in difficult times.

“With family you have that assurance – usually, anyway – that your family will accept you no matter what’s going on and that’s not always the case with friendship,” Tessina says. “Even with close friends, there’s still a bit of an expectation that you’ll be on your best behavior.”

Even though Barnes’ family rejected him, he sees some truth to what Tessina says.

“Sure, your garden-variety friends aren’t going to stick around and help you pick up the pieces of your life or wipe you’re ass when you are old,” he says, “but I have friends who have put up with me at my worst and helped me at my lowest. That’s how I know that they aren’t just friends, they are family, or what we consider family – those people who stick by you through thick and thin.”

Good friends aren’t always a substitute for family that’s away or estranged. Sometimes they’re an addition.

“I am very close to my parents and sister, nieces and nephews,” says Derek Neal of Detroit, “but I’m equally close to my best friend and his family. He is my boy, my brother from another mother.”

Neal says his friend, Andrew Marcus, attends all of his holiday and family gatherings, and everyone considers him a Neal.

“He is one of us. My parents probably love him more than me,” Neal says.

But sometimes your network of friends and your relatives don’t necessarily crossover – and holidays can present a tricky situation. You may have good friends who you’d like to invite over for dinner, but you feel obligated to invite all of your relatives. Perhaps you’re nervous about how the whole group will interact with each other. Maybe you don’t want your good friend and fellow soccer carpool buddy hearing about the time you embarrassed yourself in grade school from your brother.

Tessina advises that if you try to help your friends get to know your family a little bit before a big holiday get together, or vice versa, that can go a long way toward having a more successful event. While having everyone meet previously may not be possible, Tessina recommends letting your family know a little bit about your friend and why he or she is important to you before the big day. “You should also enlist your family’s generosity (where possible).” Tell your friends a little bit more about your family, too, so they’ll have some idea what to expect.

Instead of thinking that family and friends won’t necessarily mix well with one another, Tessina offers another perspective: Friends can help improve your relationships with your family. “I can’t imagine my life without my friends. My friendships are some of the best things in my life,” she says. “I have a wonderful, wonderful marriage, but if I didn’t have my friends to talk to and let off steam every once in awhile, I don’t think (my marriage) would be as strong.”

For many families, getting together with extended relatives often – even for holidays – just isn’t a possibility, either because of the expense, conflicting schedules or other issues. And for those times, friends become an invaluable source of connectedness.

Rose notes that she doesn’t often get to talk to her friends uninterrupted. But having them over for the holidays offered her time to really chat and not have just a casual conversation. Her children, too, had a chance to talk and play with their friends. “It was just so relaxing,” remembers Rose. “Plus, with friends, you know, there’s no baggage.”