Same-sex marriage and parenting can be a controversial civil rights topic. But what's the experience really like, in reality? Here, local families share how it's gotten better and worse. 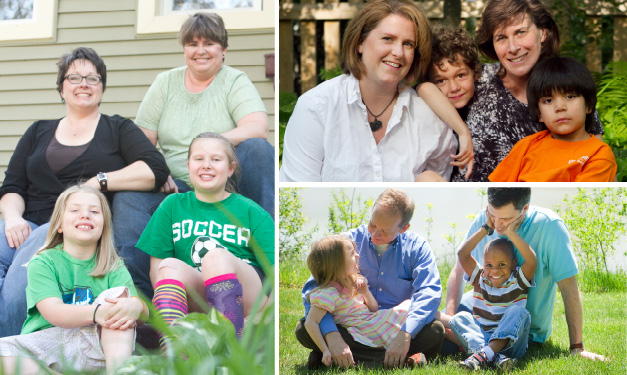 It is important for me to go ahead and affirm that I think same sex couples should be able to get married.”

And with that simple sentence, President Obama made history, becoming the first sitting president to state his support of gay marriage and, by extension, gay families. In fact, it was his experience knowing gay parents who are raising friends of his daughters that inspired his “evolution” on the topic, he said.

“Malia and Sasha, it wouldn’t dawn on them that somehow their friends’ parents would be treated differently,” Obama said in a televised interview last month. “It wouldn’t make sense to them. And frankly, that’s the kind of thinking that prompts a change in perspective.”

A 2011 Gallup poll showed 53 percent of Americans in favor of gay marriage and 45 percent opposed. And while that’s a pretty even split, the shift has been significant. Just 15 years before, in 1996, the poll found 27 percent in favor and 68 percent opposed. Approval for gay marriage has increased at least 1 percent a year up through 2009.

In 2010, support started increasing at a rate of 5 percent per year. Experts say that knowing gay families and gay people as neighbors, friends and co-workers – just like President Obama – has been a huge contributor to a growing acceptance of same-sex couples and gay parents. And yet gay parents still struggle – for legal recognition and parental rights and to gain acceptance in their communities.

Imagine that you’re married with kids, but your spouse isn’t the legal parent of the children you raise together – and, if you die, your kids could be taken from your home and put into foster care.

That’s exactly the situation faced by many families headed by gays and lesbians. According to 2010 census data, 4,884 same-sex couples are raising children in Michigan; however, few legal protections exist for these families – protections heterosexual couples take for granted, such as having access to their partner’s work-provided health benefits, the right to be considered their children’s legal parent in the event of an emergency, or even a divorce.

“If something happens to the one legal parent, the kids are legally orphans,” says Kathleen LaTosch, who is raising two boys with her partner, Jennifer, and is a consultant to nonprofits on diversity, inclusion and cultural competency.

“We’re also seeing same-sex couples who split up, and if the couple is without a legal adoption the other parent won’t be able to see their kids, and there is no child support involved, and no legal contract between the couple – sometimes the legal parent will terminate any relationship those parents have with their children.”

Michigan has a law banning adoption by unmarried couples – gay or straight. Only single people and married couples can legally adopt in Michigan. As such, in unmarried unions, only one person is legally recognized as the child’s parent, leaving the “other” parent’s role and responsibility to the child unsettled in the event of death or break-up.

That deeply affects families like Jenny Stanczyk and her wife, Cheryl. They have been together for eight years and Jenny helped raise Cheryl’s two daughters from a previous relationship. A few years ago, they decided they were not done being parents and became foster parents to two girls, now 8 and 10 years old, who they have since adopted.

Their agency reassured them that they would be able to adopt the girls if they wanted to. However, when it came time to adopt, only Jenny could do so, a decision they made because Jenny had health insurance through her job that would cover the girls.

“We had to let the kids know only I was going to be able to adopt them, and they wanted to know why can’t Cheryl adopt them, too,” Stanczyk says. “We had to tell them that that’s the way the laws are.”

Dan and Todd Jacey live in Troy and are raising a 5-year-old boy and a 4-year-old girl. While they have legal protections in place that list Todd as guardian if Dan, the legal parent, were to die, their bigger concern is custody if something should happen to their relationship – there is no legal way to protect the relationship between the non-legal parent and the children they helped raise.

“I am the only legal parent of both children and, while we see ourselves as married to one another and trust we will stay together, the idea that Todd, who stayed home from work to raise our children, would have no legal rights to them is simply unfathomable,” Dan says. “To them, he is most certainly their dad, too.”

What’s life like for gay kids in high school? Read some stories of southeast Michigan kids.

Erin White lives in Berkley with her partner, with whom she is raising twin boys. For her, one of the major issues their family faces is child support. She was living in Arizona with her previous partner when she had her sons; when that relationship ended, she had no access to child support either there or in Michigan.

“She worked, and I stayed home with our kids, and there’s nothing for child support,” she says. “Normally, the state system would have supported that, but in this case there’s nothing you can do.”

Michigan had somewhat more protections for gays and lesbians in the past, but much of that has been reversed in recent years. “Overall, the state has been backsliding on LGBT policy and legislation,” LaTosch says. “We are in a really bad place in Michigan.”

White points out that no matter how someone might feel about LGBT rights, these policies have a negative effect on children. “Kids are the ones that suffer more than gay adults, in terms of these discriminatory polices,” she says. “It becomes a disadvantage for them, to only have the legal protection of one parent.”

Where to live is definitely a big question for LGBT families. LaTosch’s and Stanczyk’s families are both within the Ferndale school district, although Stanczyk lives in Oak Park. Ferndale is one of the more LGBT-friendly communities in Michigan, so neither couple has experienced much discrimination either within schools or among the parents of their children’s friends. Both families are very involved in their children’s schools, with both moms in each couple showing up to school events and volunteering in the classroom.

“It’s just really important to be involved in the school,” LaTosch says. “The more people know you, the less likely you are to have a problem – it’s really easy to make up stories and be fearful of people (you) don’t know.”

She will send a note home to the parents of her children’s friends prior to a playdate if she doesn’t know them, just to get any awkwardness out of the way; however, it’s never been an issue, she says. She worked at Affirmations, the gay community center, for years, so she and her partner are pretty “out” and well-known in Ferndale, which helps.

Stanczyk and her wife take more of a matter-of-fact approach. “What we found tends to work is that we don’t say much of anything unless someone brings it up,” she says. Of course, she says with a laugh, “We’re probably overinvolved and overcompensating, like, ‘Hi, we’re the awesome gay couple – here’s 24 cupcakes!'” She does note that they blend in quite a bit more in Ferndale; when they were raising Cheryl’s older daughters in Hazel Park, there was a bit more of a “double-take,” she says.

White’s sons will be in kindergarten next fall, so she and her partner chose to send them to a different school in the Berkley district than the one they would typically go to. “We know about five other lesbian families who send their children there. Because of the fact there are other lesbian families there, we felt that was a better choice than having to ‘break in’ a whole school,” White says.

The Jaceys live in Troy, where Mayor Janice Daniels is the focus of a recall effort for some insensitive comments she made about gay people on her Facebook page before taking office. While they haven’t experienced any issues within the community or at their children’s current school, Dan says, they did face a bit of a challenge with their children’s preschool. It was a Christian school, and the pastor called them in to inform them he did not agree with their situation. While this led them to investigate other schools, the close, positive relationships their children had with their teachers led them to stay. “Teachers and parents in the program treated us all well, and a few even told us that they appreciated us being there,” Dan says.

“We have found that when you just live your life and let others be a part of it, most treat you well,” Dan adds.

Seeing joy amidst the challenges

Despite the many legal hurdles they face, LGBT families find the same kind of joy and fulfillment in parenting that opposite-sex families do. LaTosch says that as a lesbian household, they have a very equitable distribution of chores and responsibilities, which is a great message to pass on to their sons.

Also, despite being in Ferndale for 17 years, LaTosch says having children and being involved at school opened up a whole new aspect of the community to them. “The community opens up even wider, and that’s a really joyful thing,” she says. “It’s really cemented and strengthened our neighborhood relationships as well.”

It also provides a way to build bridges with other parents who might feel uncomfortable around her and her partner in a different context, she says. “There is a lot of separation between gays and straights, a sense of not a lot in common,” she says. The universal joys and challenges of parenthood create common ground with other parents.

Dan Jacey says that having a family is a fulfillment of a dream he’s had since he was a child, one he thought he might never get to see come true.

“I knew I was gay when I was 7. As I matured and came to terms with my sexuality, I thought … ‘But I will never have children.’ The point is, I’ve always known I wanted to have children.

“Sydney and Timmy are typical siblings, and I adore watching them love, laugh, fight and cry together,” he says. “We love our children and we work very hard to make sure they grow up healthy, happy and respectful of others.

“I can’t imagine my life any other way. We are a family and we will always have each other.”

Feeling stuck indoors? Get the entire family on their feet with these free online workouts!
Read more
You