Getting Kids Up and Moving Benefits Us All

Increasing children’s daily physical activity would save our nation more than $120 billion in health care and other related expenses, a new study says. 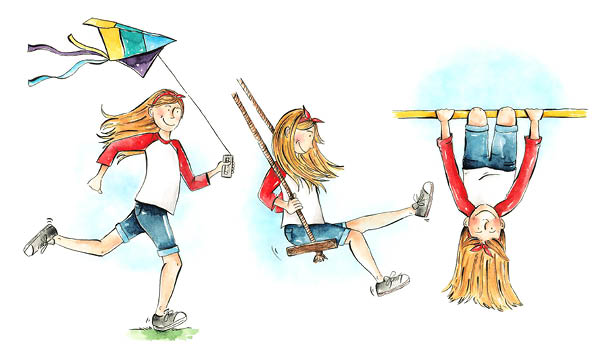 Picture the prime of your life. Was it your 20s? In high school when you were crowned homecoming queen? Right now? Well, science says it might be age 7 –at least in terms of keeping your body fit. Activity levels peak at the tender age of 7 for boys and girls in the United States and Europe, according to a big new study recently published in Health Affairs. From there, they steadily decrease with age.

This statistic is hardly surprising considering more than two-thirds of American children rarely exercise at all.

“It’s very concerning, and definitely physical activity in our children – just playing outside – has decreased tremendously over the years,” says Dr. Wendy Miller, a nutrition and preventive medicine specialist with Beaumont Health in Royal Oak.

Factors can range from inactive parents and poor coordination skills to cuts to school recess time and parental concern about kids playing outside without supervision. Bottom line: More kids are left safely sitting behind screens for hours on end.

“Children have a lot of entertainment available to them nowadays that promotes sitting and inactivity,” Miller says, “which was not the case about 40 years ago.”

Summer is a great time to reverse the trend, whether it’s a walk to the park or drawing hopscotch onto the driveway with chalk. Get kids outside and let them get grass stains on their knees. It could benefit them – and society, researchers say.

The United States could save $120 billion every year in medical expenses if all currently inactive children moved around for just an hour a day, notes the study, performed in part by researchers with the Global Obesity Prevention Center at Johns Hopkins University in Baltimore.

Using a groundbreaking computer program, researchers used public data to create avatars that modeled all 31.7 million children ages 8-11 in America. True to reports, two-thirds of the kids rarely exercised and many were obese or overweight.

The experts found if half of all children exercised intensely for 25 minutes three times a week or moved around for at least one hour every day, childhood obesity, which is linked to inactivity, would fall by more than 4 percent.

Researchers then turned those kids into adults and figured out the eventual financial consequences of direct treatment of obesity-related illnesses – including cancer, strokes and diabetes – and indirect costs of lost productivity due to illness.

Bottom line: If all now-inactive children started doing some type of vigorous activity for 25 minutes three times a week, the United States would save $62 billion annually in health care and other related expenses. The hour-a-day model is even better, saving us $120 billion a year in expenses.

What can you do?

Laura Yauck, a manager at the Beverly Hills Club, says the first step is to emphasize the importance of physical activity in your household.

“Make a priority of being active,” she says, and incorporate activity into kids’ daily lives from a young age to prevent weight issues down the road.

Encourage kids to try different sports – whether team, like basketball, or individualized, such as Choi Kwang Do. What’s key is making sure kids try their personal hardest.

“I think when kids have a hard time doing things, they back away from trying new things,” Yauck says.

As your child’s role model, you have a huge influence on their activity levels.

“Even if the parents have a weight problem and they’re trying, at least the kids see that,” Yauck adds, “and that becomes a positive influence.”

“(Show) them a variety of different recipes, and maybe they can pick out what they think they’d like to try,” Miller says. “The more involved they are with these types of things, the more likely they’d be to at least try it.”

Don’t have a little sports star on your hands? Don’t worry.

“It can be as simple as a taking a walk around a couple blocks after dinner,” Yauck says. Miller suggests competitive step tracking, too: Get a step tracker for yourself and challenge your kids to see who can get the most steps in each week.

Most of all, Miller adds, focus on what kids are gaining (health) vs. losing (weight).

“Focus on taking care of their body and why that’s important to keep their bones strong, to prevent them from having health problems – and just for the overall feeling good about themselves.”