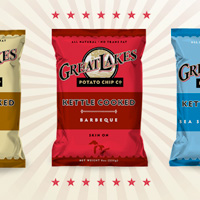 The potato chip: From kids to parents, it’s a family go-to when the munchies come a’calling. This beloved favorite is even better when it’s made locally, and the Great Lakes Potato Chip Company is the perfect example.

Michigan is one of the top potato-producing states in the U.S., and this Traverse City-based potato palace takes advantage by using only Michigan-grown spuds. Chips are seasoned using spices from Suttons Bay and packaged in materials from Traverse City.

Great Lakes Potato Chip Company products come in three flavors – original, barbecue, and sea salt and vinegar. They can be found at Plum Markets, Westborn Markets, Oleson’s Food Stores and Tom’s Markets, as well as various northern Michigan locations. Products will be available statewide this summer in Spartan, Meijer and Whole Foods stores, the company’s website notes. Check out the full list of Great Lakes Potato Chip Company locations for a hook-up near you.

One unique aspect of these thick-cut chips is that the skin is left on, adding a little extra something to the flavor. The process of being kettle-cooked gives chips a hearty crunch with every bite, and all chips are hand-seasoned to ensure that those craving flavor get their fix. The original flavor tempts the taste buds with savory sea-salty goodness, while the barbecue skips spiciness in favor of a sweet-and-salty smoldering, smoky flavor.

The vision of the company is to create flavors that reflect its Michigan heritage, says Ed Girrbach, who created Great Lakes Potato Chip Company with his son. The barbecue flavor is meant to bring to mind Up-North barbecues with friends, while the sea salt and vinegar variety conjures visions of boating on the Great Lakes, he says. As for the original-flavor chips?

"We wanted a hearty chip that would reflect the heritage of Michigan potato-growers," he says.