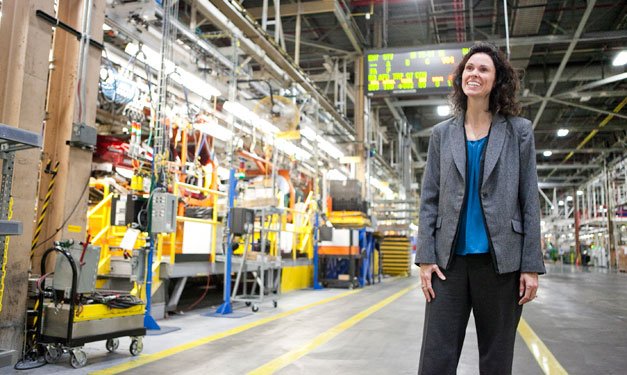 When Doneen McDowell of Rochester was promoted 14 years ago to a high-level position at General Motors, she was six weeks pregnant – and nobody knew. A great opportunity for growth, the position also carried with it a significant increase in responsibilities. She grappled with whether to stay home upon the birth of her first child or to continue working.

As her due date drew near, McDowell received some perspective from a female executive, herself a mom of two, who sensed McDowell’s panic.

“She asked me what I was thinking and what I wanted to do,” McDowell recalls. “She told me I was good at what I did, and she encouraged me to think long-term about how I could partner with my husband to make this working-mom thing work.”

This encouragement, coupled with the security in knowing that, by working, she could save for her kids’ college, helped McDowell return to work after Rachel was born. Two additional daughters later, she’s risen up the ranks and is now manager of GM’s Detroit-Hamtramck Assembly Plant, where the Chevrolet Volt, Impala and Malibu are assembled – and where Cadillac’s first electric vehicle, the ELR, will soon be as well.

McDowell is out the door and off to work by 5:30 a.m. Monday-Friday and attempts to leave work by 5 p.m., though it’s not always possible given the demands of overseeing a facility that employs 1,600 people.

Still, mom makes it a priority to be involved in at least one activity close to her daughters’ hearts. She coaches a summer basketball team for Rachel, 13. For her middle daughter Abigail, 9, she teaches religious ed class and attends twice-weekly soccer practices. And she’s planning the class holiday party for her preschooler Nicole, 4.

Her husband’s job offers more flexibility, so he drops the kids off and picks them up from school most days – and is the first point of contact if they fall sick at school. But as McDowell says, “If I have to go, I go. We have capable people who can step in.”

As for child care, the McDowells relied on a nanny.

“That was perhaps the biggest challenge for me of being a working mom. Finding someone you trust to come into your home to watch your children, especially when they are so young, is very difficult. I interviewed nannies like I do people on the job. Harder, actually.”

Now, with all of her girls in school full time, McDowell doesn’t need as much child care – but the logistics of busy schedules are more daunting.

“It’s critical to us that we don’t disadvantage our kids because we both work. We want them to experience everything, so they can find their passions in life.” That sometimes means McDowell leaves work a little early to get her daughters to and fro or be at a special event.

“I follow the 80/20 rule,” she says. “If people can do it 80 percent as good as I can, let them. Empower the people around you, so you can focus your energy in other areas.”

Today, McDowell is paying forward the advice of her former mentor. She mentors five people at GM, four of whom are women.

“I probably spend 15 percent of my time mentoring,” she says. She is also proud to use her platform to help women in the community understand the manufacturing opportunities.

“I want young ladies to know that they can work in engineering and manufacturing and have a family,” she says. McDowell is proof.