Get the lowdown on this essential area of local government – and why you should do a little research this election year before heading to the polls. 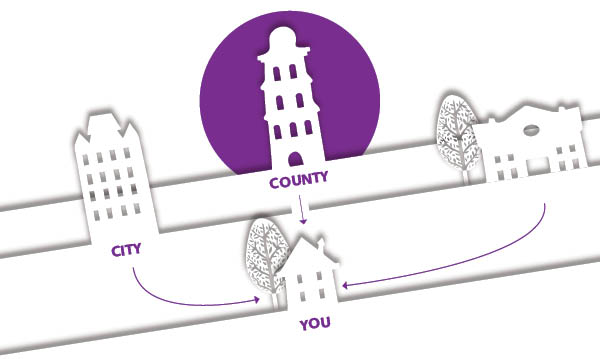 Before noon on a recent morning in March, Shelley Taub already had six calls to return related to constituent concerns. That’s the norm for the Republican Oakland County commissioner, who represents approximately 58,000 of the county’s more than 1.2 million residents. Among the issues was a downed tree in a forested area near a condominium complex in her district. The tree had fallen on a small building housing electrical infrastructure.

“With spring lightning storms on the horizon, my concern was that these dead trees could start on fire,” says the fourth-term commissioner and former Michigan state representative. “I’m working with AT&T, MDOT and the state of Michigan to clear those trees.”

It’s one of many issues Taub gets involved with on behalf of residents in her district. “Most people don’t know whom to call in situations like this,” Taub explains. “My greatest joy is cutting through that darn red tape.”

County government touches the lives of citizens on a daily basis and represents one of the oldest forms of government dating back to the 1600s. There are more than 3,000 counties in the United States, and all but two states (Connecticut and Rhode Island) have functioning counties. Michigan has 83, ranging in size from the state’s most populous, Wayne, with more than 1.8 million people, according to 2010 U.S. Census data, to Keweenaw in the Upper Peninsula with just over 2,100 residents.

Derek Melot is the communications/marketing director for the Michigan Association of Counties, a nonprofit membership association providing legislative services and educational opportunities to all but one Michigan county. He explains that in Michigan, counties serve a dual role.

“On the one hand, they ensure that state-mandated services are properly executed,” he says. “On the other hand, they also have the authority to offer additional services.”

Melot likes to use the example of courts versus parks to illustrate this point.

“The county runs the courts (probate, circuit and district) as required by the state,” he explains. “In contrast, the county decides whether it will oversee a county park system and, if so, how elaborate that system will be.”

Among a county’s other state-mandated duties include property assessment, record keeping, road maintenance, administration of elections and judicial functions, and providing services for low-income or indigent people.

Taub points out that soon after an individual is born, he or she receives a birth certificate from the county clerk – beginning a lifelong relationship with county government. The county clerk’s office also maintains vital records like marriage and death certificates. Likewise, it administers elections and performs property assessments.

In Michigan, roadwork is always a buzzword. County government often plays a crucial role in road maintenance and snow removal. According to the National Association of Counties, counties maintain 45 percent of the nation’s roads and four out of 10 bridges.

The county’s public health department provides immunizations and prepares for and responds to public health emergencies such as natural disasters, disease outbreaks or chemical spills.

“You go into a restaurant and have full confidence that the best practices in food preparation are being exercised, that the food you’re receiving is free of disease,” Melot adds. “That’s thanks to inspection by the county health department.”

Above and beyond these traditional responsibilities are novel ones like Oakland County’s Youth Assistance program, an initiative aimed at reducing youth delinquency, neglect and abuse through community involvement. As part of the program, the county places a social worker in each of the county’s school districts.

“(It) allows us to intervene and help kids who are displaying behavior problems before those problems escalate,” Taub says.

Historically, the county commission, now commonly referred to as the board of commissioners, has been the predominant governing structure. Commissioners represent a district in their county and run every two years on a partisan ballot. The number of commissioners is determined through a formula based on the county’s population. While the position is officially part-time, the demands can be considerable.

“Most people who are on their county board of commissioners are either retired or are still working full-time in their careers,” Melot says. “This is not their day job. Often, these individuals have a long history of service to their community and are looking to continue their service in another way.”

When Taub first ran for the Oakland County Board of Commissioners, she says she didn’t even realize she’d receive any payment if elected.

“I pay no attention to the salary,” says the one-time schoolteacher, despite working approximately 45 hours a week on county business.

Taub is one of Oakland County’s 21 commissioners, who collectively make up the county’s legislative branch of government. Its executive branch is headed up by a full-time elected county executive, L. Brooks Patterson.

Three other Michigan counties (Bay, Macomb and Wayne) also elect a county executive every four years to handle day-to-day operations. According to NACo, the executive typically has authority to veto ordinances enacted by the board (subject to their possible override). Likewise, the executive typically doesn’t need board approval for hiring and firing county department heads – nor for most other decision-making related to the administration of policies.

In lieu of an elected executive, many county boards appoint an administrator, which can be considered analogous to a city manager. Until her recent retirement, McDaniel served as Washtenaw County administrator for six years. She held other roles within county government, too, including deputy county administrator and human resources director, before that. The board unanimously voted to appoint McDaniel administrator when her predecessor retired in 2011.

“The county administrator reports to the board of commissioners,” says McDaniel, who officially retired in May 2015 but stayed on as a consultant to the interim administrator through last month. “I brought all business before the board at their meetings, and they considered my recommendations before voting.”

Even in counties with an executive, budgetary power is vested in the board.

“The county executive may develop a budget proposal for the county, but he still must go before the board of commissioners for its approval,” Melot of MAC says.

Taub elaborates. “It’s simple; we’re in charge of the budget,” she says of the board. “If the county clerk is proposing new voting machines, she must come before the board and detail how much it will cost. We ask the questions taxpayers would want answered. I’m my constituents’ eyes and ears – with a calculator.”

Commissioners and executives are far from the only members of county government who’ll be on the ballot in November. Per the state’s constitution, each county must also elect a sheriff who is responsible for law enforcement at the county level and running the county jail; a prosecuting attorney; a clerk; a treasurer who collects and disburses county funds; a register of deeds who records and maintains real estate documents; and a water commissioner who maintains water supply and drainage systems. Each serves a four-year term and also must run on a partisan ballot.

All these elected individuals head up their respective offices, but they too must go to their county board with budget proposals and for budget approval.

“Even a directly elected county sheriff, for example, who runs his or her own shop must go to the board for approval of his or her budget,” Melot says.

To help educate Michigan residents with the role of county government, the MAC is launching micountymatters.org this month.

“We’re excited about the launch,” Melot says. “The site really has two audiences: lawmakers in Lansing whose decisions impact county resources and residents themselves.”

He acknowledges that many people simply aren’t familiar with county government and hopes the new site will be a resource to change that.

“Often, people don’t notice all the county services they’re provided until something goes wrong,” he says.

It’s a point of view shared by Washtenaw County’s McDaniel.

“County government has a huge impact on our daily lives, and unfortunately many people don’t realize that,” she notes. “It’s so important for voters to get educated on who the candidates for county government are. This will enable them to put smart, well-informed people into office.”

Check out the other installments of the Grassroots Government series: