What is it like to be a family that practices Islam in southeast Michigan right now? Local families share their stories. 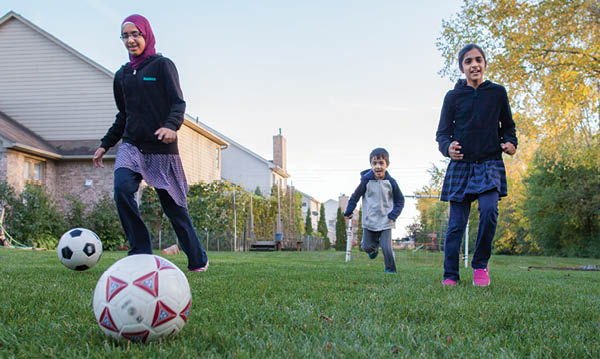 On a Tuesday evening in late January, West Bloomfield residents gathered for a town hall meeting. The topic: repealing the immigrant-friendly “welcoming” designation it had just adopted the previous spring. It was a contentious night. And, though the practice was narrowly upheld, it was a turning point for Anasie Tayyen, a Muslim mom of three girls who lives in the township.

“I never saw that much hatred or misunderstanding,” says Tayyen, who identifies as an American with parents of Syrian descent. “When I got up to speak, we were supposed to say our (home) addresses in front of the township, and I told the trustees, ‘I don’t feel safe saying my address out loud.'”

When the meeting ended, Tayyen says she feared someone would follow her, so she parked on another block in her subdivision and waited a bit before venturing home.

The fear Tayyen felt that winter night is not unfounded.

Over the course of 2015, attacks on Muslim Americans surged 78 percent to 196 reported incidents, according to a September 2016 report by the Center for the Study of Hate and Extremism, based at California State University, San Bernardino.

“These are levels not surpassed since the aftermath of the 9/11 attacks in 2001,” the report notes, “and come at a time of heightened prejudice, recurring terrorism and polarized politics.” Limited data for 2016 shows a doubling of anti-Muslim hate crimes in New York City and Ohio, it adds, and Delaware had its “first reported anti-Muslim hate crime in years.”

With news of ISIS terrorist attacks across the globe and a presidential candidate’s strong anti-Muslim rhetoric at home, there’s been a huge shift in attitudes toward the nation’s Muslim American population, which Pew Research Center estimates at 3.3 million – about 300,000 to 400,000 of whom call metro Detroit home, Royal Oak-based Michigan Muslim Community Council tells Metro Parent (it’s based on a few sources, as it’s not officially census-tracked).

While there have been 55 threats and hate crimes against U.S. mosques so far this year, only one attempt has been made in Michigan, notes Dawud Walid, executive director of Council on American-Islamic Relations – Michigan, located in Farmington Hills.

“We’ve had instances of death threats against people in congregations,” says Walid, a Detroit dad of three. “We’ve had complaints even this year of Muslim women driving down the streets and being yelled at; a couple of instances in Dearborn of people being assaulted at grocery stores.”

And it’s all cause for concern, says Canton mom of four Amina Iqbal, also Muslim.

“I think mothers always feel very protective of their children,” she says. “I would say the level has increased after all these hate crimes that have taken place.”

Anti-Muslim political rhetoric during this presidential campaign cycle has played a role, according to the recent Center for the Study of Hate and Extremism report. It released official data on hate crimes in 20 states, including Michigan.

Researchers dug even deeper by examining the effect of statements by political leaders in response to “catalytic events.” They found there was a “dramatic” drop in anti-Muslim crimes after George W. Bush’s post-9/11 “statements of tolerance at a mosque” – but “a moderate weekly rise in hate searches on Google like ‘kill all Muslims'” after Republican presidential candidate Donald Trump’s late-2015 proposed Muslim ban. The report draws a strong connection between statements like this and prejudiced actions.

It’s something that Safa Sankari, a Bloomfield Township mom of three – two girls, 12 and 9, and a son who’s 8 – says she feels more acutely these days.

“I feel like the last year, because of everything going on, people have felt like they have been given permission to be either rude or questioning or make you feel like you don’t belong,” Sankari says. “So I definitely felt a difference from when I was younger to now.”

She even worries about the safety of her children, who attend a local Islamic school. Could someone target the school because of its students’ religious views? “God forbid,” Sankari says. “This is our fear. We live with that fear.”

For Tayyen, it feels worse now than 9/11. “That’s the first time a lot of Americans heard of terrorism in the name of religion.” That, she says, was the beginning, and now there’s a cumulative effect.

The hate was apparent to Tayyen on a trip to Costco in Commerce Township, when she was waiting to have her receipt checked on the way out. A woman approached her from behind, whispered “Trump” in her ear and walked away. Tayyen almost didn’t believe her ears. She wanted to find the woman in the parking lot to talk to her about what had happened but didn’t get the chance.

Similarly, a small incident at a local chain store stopped Iqbal from shopping alone in the evening. “I remember being followed by teenage boys just being silly – and there was a little fear in my heart,” Iqbal, who wears a hijab headscarf, says. For her, that meant a change in her routine, and today, she even prefers to walk in groups.

Sankari, who also wears a hijab, says she and her husband have a heightened sense of anxiety about shopping or going out at night, as well.

“It’s really sad because I shouldn’t have to be extra vigilant in the day going shopping. I’m not doing anything wrong,” Sankari says. “We’re all trying to live our lives.”

While negative incidents do happen, Tayyen also stresses the good in people, like a person she encountered at an office building in Southfield. “Somebody touched my shoulder and I got kind of scared and I turned around, and it was this lady that was like, ‘We’re with you.'”

Sankari agrees many people have been nicer and even gone out of their way to show not everybody feels negatively towards Muslim Americans. The good outweighs the bad, these moms say, especially in a diverse region like southeast Michigan.

What about the kids?

Growing up is tough enough, but when you look different from someone else because you choose to wear a hijab, for example, other kids who may not understand can be cruel.

Sankari’s 12-year-old, Muna, encountered this with a young boy at Kroger in Bloomfield. Muna, who attends the private Islamic Huda School in Franklin, says she was still wearing her hijab from school when she accompanied her mom to the store.

“I kind of got a little bit lost,” Muna says. “And a kid, he walked up to me – he looked like my age, maybe a little bit older – and he told me, ‘Can you please remove your headscarf? Because as far as I’m concerned, you have no hair or ears.'”

It was a small incident and Muna simply walked away, not wanting to feed into any stereotype the boy may have had about Muslims being argumentative. She even waited a month to tell her mom about what happened.

“(It) kind of made me sad,” Muna says, “because I remember when I was little, no one said anything to my mom or any of my other friends that wear the scarf.”

Things were, in fact, different when these local moms were growing up.

As a child in Brownstown, Iqbal, whose parents are from Pakistan and moved here in 1971, says she felt safe riding her bike around the block. She doesn’t with her kids. “We have to constantly worry, ‘Is this safe for my child to play outside?'”

Her children, three girls ages 13, 10 and 1 and a boy, 6, haven’t reported any incidents, but her eldest is heading to high school next year. Mom told her “she has to talk to us if she ever comes across something or feels that she was mistreated.”

Over in Dearborn, 15-year-old Adina Kanan says life at school for her isn’t any different from that of your average teenager.

The Dearborn High School sophomore, whose family is of Palestinian decent, says she hasn’t been mistreated and feels safe, even though she wears a hijab to cover her hair. For her, it’s the norm. “If you walk into Dearborn High, you’ll see a bunch of girls with a scarf on,” Adina says.

Issues are rare, she adds, due to the city’s diversity and many residents’ practice or understanding of Islam. (It’s worth noting not all Arab-Americans are Muslim, or vice versa, a lingering misconception – though Dearborn has strong populations of both.)

Adina’s mom, Suzanne, agrees. “I would probably be a little more concerned if I was living outside of Dearborn or if I was living in a predominately white neighborhood,” Kanan says, adding that she and her children, two sons ages 20 and 18 and two daughters, 15 and 12, haven’t experienced any issues locally.

When it comes to dealing with prejudice, Kanan urges her kids to show their own character instead of being on the defense.

“I’ve always been the type to focus on them being good kids, them being well-mannered,” Kanan says.

Other local schools, such as the Muslim school Tayyen’s daughters attend, have proactively addressed some of the misunderstandings surrounding Islam – and equipped kids with information to use to educate others, too.

“They teach them these people aren’t Muslim; we know they don’t represent Islam,” Tayyen says. Teachers tell children it’s forbidden to hurt or kill people like ISIS extremists do. They use these news stories as teachable moments.

“Why does he hate us? If he becomes president, what is he going to do?” Tayyen’s youngest daughter, 7, once asked her of Trump. Mom told her it’s a political tool he’s using to get votes. “I don’t want my children to walk around thinking half the grocery store hates them,” Tayyen says.

It’s a tough balancing act for these moms. While they have their own fears and anxieties, they don’t want their children to share those feelings.

Iqbal adds, “I have so many other things to worry about,” instead of justifying her religion.

This year has been a turning point. But hope isn’t lost.

“Things are going to get better,” Tayyen says. “We’re going to make it better.”

From savory to sweet, these Super Bowl dips will satisfy any craving your guests might have. Try one of these recipes, which are fast (and easy!) to make for the main event.
Read more
Travel