Candy corn, Snickers, Skittles and more – get the scoop on Halloween candy calories and other tidbits just in time for Oct. 31. 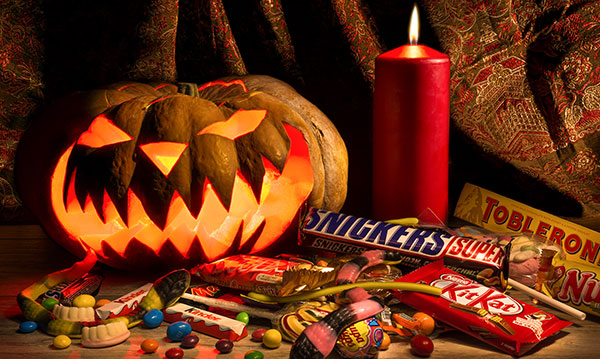 What will little ghosts and goblins be finding in their Halloween bags come Oct. 31? Turns out candy corn tops the list here in Michigan, based on a 10-year sales review from CandyStore.com – by their calculations, we’ll be eating almost 150 thousand (yup, thousand!) pounds of the quintessential fall goodie this year.

That’s a lot of candy corn! And just how many calories are in each serving of this favorite, and other popular Halloween candies? Look below for calorie counts, along with an interest tidbit about each sweet favorite.

Simple, sweet and tri-colored – just try to eat a single piece of candy corn. They beg to be eaten by the handful. The candy’s history dates back to the 1880s, and the recipe has stayed relatively the same with a mixture of sugar, fondant, corn syrup, vanilla and marshmallow creme. Originally, the candy was marketed as “fake corn” in a box with a chicken on it.

We can thank the Brits for this candy that is Michiganders’ second Halloween fave (a close second behind candy corn). Skittles made their U.S. debut in 1979 with five flavors – orange, lemon, lime, grape and strawberry. Today, they have plenty of other varieties, including my kiddos’ personal preference, Sour Skittles.

Calories per serving: 20 per piece

Quick candy quiz – what was the original name for Starburst? Opal Fruits. And you can thank England for this candy, too, which was introduced stateside in 1967. Next question: What were the four original flavors? Strawberry, lime, lemon and orange. These also happen to be Michigan’s third favorite candy.

Calories per serving: 210 for two pieces

Rich, creamy peanut butter on the inside, milk chocolate on the outside, no wonder kids – and adults – love this candy. The clever cups are named after their creator, Harry Burnett Reese who came up with the idea for these confections, along with many others, as he trekked through dairy farms in none other than Hershey, Pennsylvania. They started making the rounds around 1928.

Calories per serving: 80 for the fun size

Calories per serving: 22 per piece

Hershey’s Kisses date back to 1907. A competing candy company had their own version, the Wilbur Bud. But Hershey’s won out with innovations to automate the process of churning out kisses by the thousands – and quickly. And really, how far could a candy named Wilbur Bud, go?

Calories per serving: 88 per half-ounce scoop

M&Ms candies garnered a loyal following during World War II. The candy-coated chocolates, named after inventors William Murrie and Forrest Mars Sr. – hence M&M – were designed to melt in your mouth, not in your hand. That was ideal for soldiers carrying rations.