Helping Kids Cope When a Sibling Moves Out of the Home

Every parent will eventually experience empty nest syndrome. But younger siblings can struggle when a sibling moves out. Here's how to help with the transition. 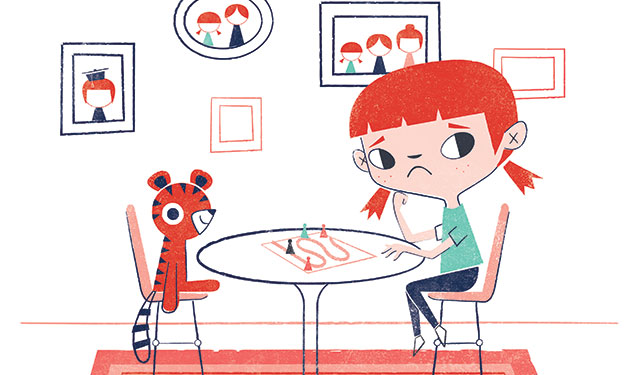 Brenna Cialone of Dearborn was only 7 years old when her big sister, Molly, went away to college at Michigan State University. Three years later, Brenna’s other sister, Abby, also left home, bound for Spartan territory. For the first time ever, Brenna was the only child at home, and it was tough.

“I don’t know that I realized it at the time, but it was a huge adjustment for Brenna,” says her mom, Kelly. “She tells me now that she felt left behind.”

With back-to-school season looming, parents the world over are likely contemplating the changes their nest will soon undergo. Sometimes lost in the mix, though, is how an older sibling’s departure can also affect younger siblings left at home.

“It truly affects everyone in the family — even the dog,” says Natalie Caine, founder of Life in Transition support services, based in California. “With siblings, it’s complex because on the one hand, they’re going to potentially be getting a lot more attention from their parents now. The contrast is realizing that – oh no – they don’t want this much attention.”

The Cialones can relate on both fronts.

“Brenna was always shuffled to wherever we were going for the older girls,” Kelly recalls. “She always had to tag along to the big kid events, but now she has more of my time. It’s all her, and she likes not having to share me.”

In fact, Brenna, when she was 14, and her mom vacationed in Florida together, just the two of them, over one of Brenna’s winter breaks.

“I certainly never did that with the older girls,” Kelly laughs.

While her sisters’ flight from the nest has been advantageous in many ways, it still left a deep void at the time.

“There was always at least one of her sisters at home to take her places or to talk to,” says Kelly.

Psychotherapist Wendy Aronsson says that depending on the relationship among siblings, they may feel a real sense of loss.

“They have lost their friend, their peer, their confidante,” says Aronsson, who is the author of a book titled Refeathering the Empty Nest. “There results a real shift in the family dynamic.”

Aronsson has been counseling families for more than three decades. She has seen firsthand how an empty nest can affect siblings. It’s her recommendation that parents encourage a connection between kids still at home and those who have left.

“Be particularly mindful that the older child off at school is adjusting,” Aronsson says. “That adjustment period may take his or her focus off of family. Parents need to help younger siblings understand that that doesn’t mean the older child has forgotten them.”

“I’ve worked with parents who are upset that their child has been away at school for two weeks and hasn’t texted or emailed their little sister back,” Caine says. “I remind them that their college-aged child is focused on making friends, managing time and school work. Families need to have realistic expectations.”

In Brenna Cialone’s case, technology has been a huge help in keeping communication flowing with her older sisters.

“Brenna texts and calls her sisters all of the time, and they do the same to her,” Kelly notes. “In fact, she texts them about me and how mean I am!”

Similarly, before school dances, Brenna would text Molly and Abby pictures of possible dresses, so her sisters could weigh in on her potential looks.

Now that her oldest sister is out of college and living nearby, Brenna has regular sleepovers with her. Similarly, Molly and her boyfriend make special efforts to take Brenna out and to attend her school events.

“Thankfully, I don’t even have to ask the older girls,” says Kelly. “They get together with Brenna every time they are in town – even if it’s a huge inconvenience like sitting in the stands for a freezing soccer game. They know it’s very important to her.”

Caine notes that for many kids struggling with their feelings after a sibling’s departure, it’s not so easy.

“Some kids are very verbal, and parents don’t have to work as hard,” she notes. “For those kids who aren’t, ask them what they need and how you can help them out.”

The Cialone family regularly visited Molly and Abby at MSU, attending football games and taking the older girls out for lunch. Brenna was a regular fixture on those visits.

“Keep the sibling there,” she says. “Be as concrete with them as possible. Their understanding of college will be very different.”

“Give them the parent time that they’ve previously had to share,” she says. “Play! Chat with them while you’re cooking. Chat while in the car. Tell them stories. Storytelling sticks.”

Caine suggests an approach where the parents mention how much they’re missing the child away at school and then ask if the younger child ever feels that way.

“For many families, this is a fabulous time,” she says. “It’s special time with the child or children still at home.”

For those moms and dads who themselves aren’t having such an easy time adapting to the changing nest, Caine suggests a candid approach when their emotions bubble over.

“If you’re tearful and your younger children see that, let them know that there is nothing they need to do for you,” she says. “Tell them that feelings are feelings and that you’re going to be fine. Most kids can’t stand when their parents cry, but crying is good and normal. It shows vulnerability.”

In the midst of change and ensuing adjustments, it may be hard for young siblings to see the positives of their sibling’s departure – but then again, it may not.

Christine Cowan of Birmingham was 10 years old when her oldest sibling left for college more than 30 years ago. Her two other siblings followed suit in short order.

“I was with each of my siblings when, one by one, they were dropped off at college,” she recalls. “I couldn’t wait to do that. That’s one real advantage of siblings – you can see what’s ahead for you. I was more prepared at college drop-off as a result. I wasn’t scared or nervous. I was just excited it was finally my turn.”

This can be a big benefit, Aronsson agrees.

“Younger siblings will have firsthand exposure to the pre-college search process through their sibling’s experience and know what’s coming,” she says. “And now, with their sibling gone, they may have a chance to shine in their own light and be seen by the rest of the family in a different way. Ultimately, they may come into their own.”

Have an adult child moving back home? Get advice for coping when older kids move home with their parents.