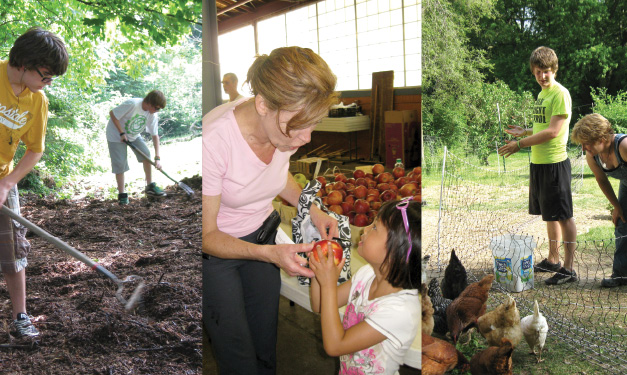 Summer Saturdays at the Royal Oak Farmers Market are hectic. The parking lot is packed with families stuffing bags of fresh flowers and produce into their cars. Inside, shoppers are lining up for just-picked vegetables, Michigan honey and advice on how to care for their gardens at home. Really, it’s a festival of fresh food happening at hundreds of farmers markets across the country, and dozens throughout southeast Michigan.

Why? Motivated by anxiety over food contamination and the high cost of private-label organic produce, parents are rushing to local farmers markets in droves. And just as the organic movement has changed the way families eat, the local food movement is changing the way we think about where our family’s food comes from – and maybe even whether it’s time to start doing the farming ourselves.

Megan Gunnell of Royal Oak brings her family to the market most Saturdays. “We’re going to cook up a storm tonight, make some asparagus and shiitake mushrooms and support Michigan farmers,” she says.

Her 10-year-old son Elliott says he can tell the difference between the products sold at the market and those from the grocery store. “I really like the eggs and the corn from here,” he says. “They are a lot better tasting.”

MSU organic outreach specialist Vicki Morrone has seen the growing interest in organics up close, as she helps organic vegetable and field crop producers in her work.

“There is a group of people, especially parents, who are concerned about the problems with pollution and contamination in our water and our food,” Morrone says, “and if they see that organic has fewer toxins and pesticides – well, it’s only natural they’d want to feed that to their kids.”

According to the U.S. Department of Agriculture (USDA), organic farming has become one of the fastest-growing segments of U.S. agriculture. Sales of organic products skyrocketed from $3.6 billion in 1997 to 21.1 billion in 2008.

Results of the 2008 USDA Farm Census showed there were nearly 14,540 certified and exempt organic farms in the U.S. Michigan ranked 11th in the survey, with 461 certified and exempt farms. The “exempt” classification, which fits many local farms, means the farm is too small to go through the costly certification process, but that it follows National Organic Standards.

What fruits and vegetables contain the most pesticide residue? Check out our list of the “dirty dozen” of produce.

Although fans love that organics are grown more naturally and without the pesticides and hormones used in conventionally grown farm products, organic produce can also put a major strain on the grocery budget.

Lisa Boyd started buying organic produce at a national health-food chain store after her first child was born. But when the Troy mom had her second child, her husband wondered if they could still afford organics. That’s when Boyd found her local farmers market.

“The prices at a farmers market are considerably less than at Kroger or Whole Foods or any other store,” she says, “because you’re buying direct from the farmers.”

Increasingly, consumers are buying produce through vegetable stands and farmers markets. But there is also a way families can become members of a farm – many of which are more local than you would ever think.

After leaving a job selling cosmetics at a high-end department store, Mary Fox of West Bloomfield was uncertain what to do next. So the mother of three returned to her first love – gardening.

“It was at the same time all of the food scares were coming around, and we just wanted to be more in control of our food,” says the mother of three. “I’ve always been a gardener – a master gardener since I was a teenager – and I’ve grown food for my family. So I thought, ‘Well, let me take all of my talents and let’s see what I can do.'”

Mary and her middle son Joe bought some chickens and started taking her organically grown salad greens and fresh chicken eggs to Wixom’s Farmers Market. “People were almost desperate – especially when they found out I had eggs. They’d say, ‘Oh, I gotta get your eggs!'” Fox says.

The chickens were Joe’s passion. “I went to my aunt’s house in Vermont when I was 7 and her friend had chickens, and I thought they were the coolest things,” Joe says. “I was extremely excited the first time I found an egg after we got the chickens,” Joe says. “I ran back in the house with it and waved it over my head.”

Ready to get started? Check out the Metro Parent guide to farmers markets and CSAs in southeast Michigan.

Fox soon turned her backyard garden into a CSA – a Community Supported Agriculture farm. CSA owners sell shares of their farms early in the season, guaranteeing funding for the spring planting season. Shareholding members reap the benefits when fruits and vegetables ripen and farmers deliver the produce, from spring through late autumn.

Fox’s One Acre Farm CSA has grown exponentially in three years. They now have 15 chickens and sell out of Birmingham Farmers Market. And since the early days when it was just a plot in the Fox family’s backyard, Mary has convinced five neighbors to let her use small plots in their yards.

Besides the regular shares people can buy, many CSAs also offer work shares, allowing an individual or family to work on the farm for free produce.

Eileen Toth of West Bloomfield committed her family to a work share at One Acre Farm with several goals in mind. Primarily, she wanted her sons Josh and Gabe to have something constructive to do over the summer.

“My husband and I wanted our boys to appreciate the time and effort it takes to create meals and to contribute to the household,” Toth says. “We believe that, even if the payoff is down the road, eventually they will appreciate the opportunity that this ‘sharing’ will bring.”

Josh and Gabe Toth planted mushrooms in early June, raking a mushroom mix into a shaded, buggy area of the farm. “It looks like mulch,” Josh, 16, says of the mushroom mixture. “It’s caramel-colored and you layer it with regular mulch.”

Gabe, 14, admits he wasn’t thrilled when he heard his parents’ plan for their summer days. “But it’s a lot better than I thought it would be,” he says. “I thought it would be going around doing a bunch of work, but I’m really getting good experience out of it and learning a lot.”

MSU’s Morrone has seen a lot of families taking up gardening at CSAs, community gardens and in t
heir own yards as a new kind of family activity. “It has become a productive hobby,” Morrone says. “It’s not like collecting stamps. It has a real purpose. Gardening produces something that people feel is safer and healthier and tastier.”

Janet Johnson of Sterling Heights runs Urban Pioneers CSA in her backyard, selling just four shares to members. She had always gardened for her family, but after her husband passed away and her son grew up, she had too much food. Rather than cut back on her gardening, she picked up clients.

“It’s for people who want the very freshest vegetables they can get,” Johnson says. “It is something that reconnects you to the basic things of life. For me, it’s a spiritual thing – which is good, because I probably make about 12 cents an hour!”

Running a small farm is certainly a spiritual endeavor at St. Peters Community Farm in Clinton Township. Joyce Schwarz, a parishioner at St. Peter Church of Mount Clemens, runs the church’s garden that launched in 2010 to provide fresh vegetables for its food bank. The community has come together over the project. One church member leases the church enough land to run a 115-by-71-foot garden for just $1 a year. A lawyer donated seeds. Others have donated tomato plants and their time.

“We just shake our heads, because every time we ask for something, someone answers,” Schwarz says. “We had a Boy Scout troop put together a tent for the tomatoes, because last year the deer ate the tops off the tomatoes!” Volunteers at the farm can take home vegetables in trade for their work, but Schwarz says 90 percent of the produce goes straight to the church’s food bank.

The Royal Oak Community Farm, a 40-member CSA, is another recent creation. After initially working off five acres of land on 11 Mile Road, it’s now operating on a smaller scale while searching for a new home. The idea is to have volunteers help on the farm, learning organic techniques from resident horticulturalist Trevor Johnson. Members pick up their shares at the Royal Oak Farmers Market. The farm also sells its produce to local restaurants and hosts field trips for local school kids.

Wendy Ernzen’s family bought a half share in the farm for $425, or about 16 dollars a week. Her children are too young to work on the farm, but they are happy to pick up their share at Royal Oak Farmers Market each Saturday.

“It’s local, it saves money and you know you’re getting healthy food,” Ernzen says. “It’s also great the girls get exposed to vegetables they wouldn’t normally have.”

Even hospitals are getting involved. St. Joseph Mercy Health System in Ann Arbor broke ground on its own 15-acre farm in April 2010. Flowers, produce and honey from the Farm at St. Joe’s is sold at the hospital’s own weekly market and, when possible, served to patients. The farm also provides local school children the opportunity to learn about farming hands on.

“It’s so important to help children learn where their food is coming from,” says registered dietician Lisa McDowell of St. Joe’s pharmacy department. “We find that children are far more interested in eating the fruits and vegetables if they’ve had a hand in growing them or harvesting them.”