How Labels Hold Girls Back

Whether you're calling her a bossy girl, princess or tomboy, the words you use to describe your daughter could impact her more than you realize. Here's how labels hold girls back. 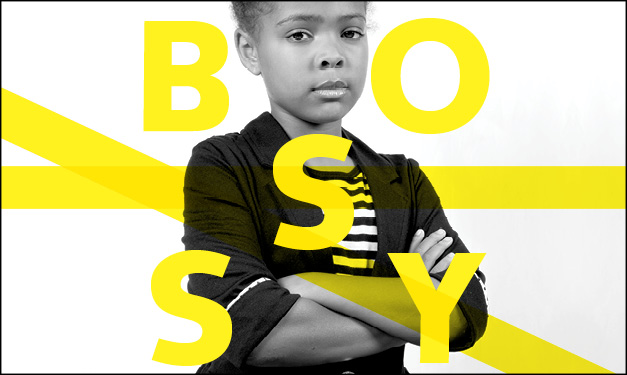 Even in today’s world, where women make up the majority of college students and there are seemingly equal opportunities for all, leadership roles at the highest levels are still held by men.

As Facebook COO Sheryl Sandberg observed in her book Lean In, men outnumber women elected officials by more than 70 percent. Only 5 percent of Fortune 500 CEOs are female and, in 2013, women earned 78 cents for every dollar made by their male peers.

Ask Sandberg and she’ll say in part it’s because women are fearful of how others will perceive them if they speak up, step out, take a seat at the table and assert themselves.

It stems from childhood, she argues, and it starts with labels.

Studies have shown that girls are twice as likely as boys to worry that leadership roles will make them seem “bossy.” Other terms applied to strong girls – but not necessarily boys – include “aggressive,” “uptight” or “too ambitious.”

Sandberg argues girls learn to quash inherent characteristics and behaviors and withdraw from leadership roles in an effort to avoid negative stereotypes.

“Boys are seldom called ‘bossy’ because a boy taking the role of a boss does not surprise or offend. As someone who was called this for much of my childhood, I know that it is not a compliment,” Sandberg writes. “Young women internalize societal cues about what defines ‘appropriate’ behavior and, in turn, silence themselves.”

In an effort to raise awareness of how the words we use can hold girls back, Sandberg launched “Ban Bossy,” a public service campaign endorsed by her foundation, LeanIn.org, in partnership with the Girl Scouts of the USA.

In one memorable video for the effort, Beyoncé declares: “I’m not bossy. I’m the boss.”

Sandberg argues that breaking down internal barriers is critical to gaining power in the workplace and the world.

“We can dismantle the hurdles in ourselves today. We can start at this very moment,” she says. “Women will tear down the external barriers once we achieve leadership roles.”

According to Dr. Art Markman, a psychologist, author and professor at The University of Texas at Austin, slapping labels on people implies they embody the essence of that word.

“We believe those essences are more permanent, deeper parts of who they are,” he says. “When you apply that same sort of thing to a kid, whether it’s positive or negative, it can make children feel locked into a stereotype.”

Even seemingly kind labels can have negative effects. For example, calling a girl “pretty” too often may emphasize her appearance over other worthy traits. Labels like “artist” or “scientist” might make her feel locked into a role.

“Labels can close roads off and tell them they are one thing and not another at a time when we want kids exploring who they are,” Markman says. “There are lots of people kids want to please – parents, teachers and friends. The more labels that get put on them, the more they worry about who is going to be concerned or disappointed when they go into a different direction.”

Markman acknowledges that being labeled “bossy” has particularly detrimental effects.

Laura Roush, a mother of four from Northville at the time of this interview, battled her own labels growing up.

Now that she has two daughters, she sees how labels influence them.

Her older daughter has shied away from interests like science club because she doesn’t want to become known as “nerdy” or even singled out as “smart” or “gifted.”

Culture might be turning young women off to careers in science, but parents can help them get girls geeked about the STEM field.

“She’s been teased and seen as different,” Roush says. “It causes her not to try things that I know she’d enjoy and be good at, because she’s so worried about being seen in a negative light.”

Roush says her younger daughter, in trying to win over teachers and friends, has been plagued by labels like “big mouth,” “show-off” and “know-it-all.”

“The words you say can hurt and make people become underachievers because they want to be perceived as more normal,” she says. “Kids that are called ‘bossy’ have a lot to say, but a lot of times they can be bored at school or frustrated that they’re not being listened to.”

Dawn Thie, a mom from Brighton when she was interviewed, cultivated a thick skin growing up in New Jersey and working as an advertising executive in New York City.

Thie battled labels like “pushy” or, even worse, the b-word – the grown-up equivalent of “bossy.”

“You’ve got to be a strong person or people will walk all over you, but it’s a fine line,” she says. “There’s a double standard.”

Thie says she wants to raise her daughter to be a leader, not a follower, but has already heard her called “strong-willed” and “tattletale.”

“What I’m trying to teach her is not every situation requires the same type of response. Sometimes it is appropriate to be ‘bossy’ and other times it takes a softer approach. You have to figure out how to navigate that,” Thie says.

Psychologist Melissa Johnson, founder and CEO of the Institute for Girls’ Development in Pasadena, California, understands all too well the importance of words.

She has developed curriculum called “Stand Up! Speak Out!” that encourages girls to use “brave talk” and “straight talk” to assert themselves. Yet many worry if they are more direct, they’ll be labeled “mean girls.”

She says adults play a major role in influencing girls’ perception of themselves, and suggests using powerful descriptors like “confident,” “competent,” “capable” and “courageous” to describe girls who stretch out of their comfort zone.

Instead of being “bossy,” girls can have “grit,” “strength,” “effectiveness,” “perseverance” and “persistence.” (Here are 10 ways to ban ‘bossy’ from your life.)

It’s also important to examine terms that relate to gender, such as “princess” and “tomboy,” Johnson says.

“It’s vital to think about how we use language with kids and work at eliminating those cultural stereotypes that limit both boys and girls,” adds Johnson.

Novi-based author and counselor Tara Michener admits she’s been the victim of labels herself.

“I have had situations in my life as an adult when I’ve sat in a certain seat or stood up for something I believe in and I’ve been called ‘aggressive’ – even when I’m smiling,” she says. “A gentleman might do the same thing and be called ‘brave’ or ‘courageous.'”

Michener runs a program called “I Love Myself Because … ” aimed at helping girls find positive words to describe themselves.

“Not to be conceited, but to celebrate their strengths,” Michener says.

She agrees that adults play a huge role in guiding girls to overcome their fear of being bossy and find their inner boss.

“I think being a leader is really stepping out and serving – so encourage them if they have an idea; help them cultivate it and understand how to go for it,” she says.

Try one — or all — of these easy breakfast ideas for kids when the school year begins.
Read more
Health

How busy moms can really — and should — make time for themselves.
Read more
Advice