How Parents Can Stay Connected to Their Childless Friends 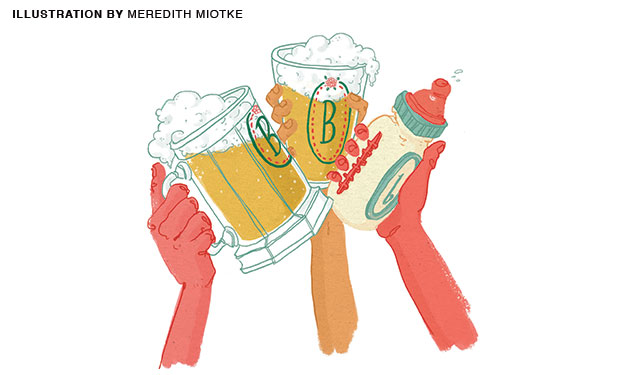 Years ago, I used to do yoga all the time with my close friend from high school. After class, we’d grab coffee and talk about our plans for the night, the weekend and life in general.

Then she became a mom.

Her tiny daughter was so sweet and I was truly happy for her new family. But things between us changed.

Her world filled with things I just couldn’t relate to – and it wasn’t just the diapers, board books and organic pureed peas. She had responsibilities that made our leisurely lunches and late nights a thing of the past.

Suddenly, there was a deep divide between the lives we were living, and it became seemingly impossible to meet in the middle – let alone get together for a drink.

Fast forward a few years and it was my turn to have kids. I suddenly got it. The intense nature of parenting, especially when your kids are super young, means you have to leave the independent life, and unfortunately some friends, behind. At least for a while.

My friend Chris Jablonski, a single dad from Brighton, finds bridging the gap between his new family and former friends a challenge.

Jablonski was a long-time bachelor who continued living la vida loca long after most of his peers became parents.

Jablonski says he tried to keep in touch, but the chasm continued to widen as he indulged in Detroit’s nightlife scene and a rich social life that his friends with children just couldn’t match.

“You try to keep them on your invite list as long as you can, and after a while you just kind of get it,” he says. “You just kind of figure they’re soccer parents now. It’s really kind of sad.”

Now that Jablonski is in the thick of raising his own munchkins, he’s the one falling from the scene.

“It’s come full circle, because now their kids are grown and out of the house. My kids are 2 and 5, and I’ve got war stories they don’t have anymore,” he says.

Jablonski deals with it in part by meeting up with friends at daytime music festivals, so he can experience local bands and culture with his children in tow. He also entertains at home, mixing up the crowd with kid-less couples and families alike.

“Isn’t that the key to a good party, anyway?” he says.

Another friend, Lauren Romeo, says it can be a struggle staying connected not only with acquaintances, but her own two sisters who haven’t had children yet. When she has her younger siblings over, the kids are “a novelty” that gets old fast.

“It’s overstimulating. Even if you have good kids, I find that sometimes people without kids just get a little overwhelmed,” says the Northville mother of two. “It’s fine for a while, but they get to the point where they need a break.”

It’s even difficult to find common ground with friends who have children of different ages, Romeo says. Bring families together and spouses may not hit it off, older kids may not want to “babysit,” and children of the same age may not get along.

Yet Romeo is a great connecter, and she’s found ways to draw people together through community service projects as chair of the Main Street League. Among her events (ironically) are diaper drives at her family’s South Lyon restaurant, Lake Street Tavern.

Romeo also hosts an annual girls holiday party with cocktails and hors d’oeuvres where she invites friends old and new, with children and without – and of course, her sisters. The only requirement is to bring a bottle of wine and an inexpensive “girly gift” to exchange.

Her husband takes the kids and meets up with other dads for a late dinner, then puts them to bed while the party continues.

“Some years it changes, and I don’t get to it or it’s a last-minute thing, but I think it’s so important to set up traditions like that with friends,” she says.

Staying in touch after baby is a challenge on both sides, says Tara Lindsay, co-founder of the Michigan Professional Nanny Association.

Although the Waterford resident is accustomed to kids, she still feels the sting of getting blown off by friends with families.

“It’s hurtful when my friends become parents and seem to have all sorts of time to socialize with other parents, but can no longer include me,” says the Waterford resident. “I deeply appreciate the friends who make the effort, despite my lack of parenthood.”

Blair Koenig, author and creator of the humor blog STFU, Parents, says she has observed the divide between parents and non-parents through five years of writing about the topic. The New Yorker launched her blog in reaction to friends who used social media to communicate every detail of parenting minutia like diaper changes and nap schedules.

“My one friend from high school posted at least 10 times in one day about her baby’s fever going up and down,” Koenig says.

The blog has resonated, and its audience is split about evenly between people with kids and without. Koenig thinks that’s a testament to the fact that friends want mutual understanding.

“A lot of things have changed with social media since I started it, and so have my feelings about the parent and non-parent divide,” she says. “I think it exists largely in our minds.”

Koenig says people come to see themselves differently post-parenthood and might think it’s too difficult to bridge the gulf. Old friends, on the other hand, can feel jilted.

But it may all be one big misunderstanding.

“If my friend has a newborn, a part of me doesn’t want to intrude, eat up her time or wake her from a midday nap she might desperately need. Whereas my friend is thinking I just don’t care and I’m writing her off completely,” Koenig says. “We project our own fears and insecurities, and we should probably let go of that. People need to be patient with each other and not make any assumptions.”

Not sure how to stay close with your friends after having kids? Check out these 10 tips for staying connected.

This article was originally published in 2014.

Lace up your skates and enjoy an evening of old-school fun with your family at one near you.
Read more
Advice

From boogers to pen caps, here's why some kids can't seem to keep strange and stomach-turning things out of their mouths.
Read more
You