How to Get Kids to Be More Mindful About Eating

Stop the zombie eating! Here's how a 'mindful' approach creates healthier habits in your children. 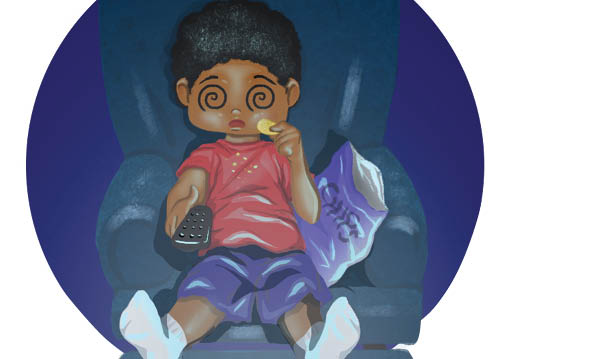 “We learn as little children that when we eat, we’re soothed,” she says. Food becomes a security blanket instead of nourishment for a rumbly tummy. Here’s how to discuss a “mindful eating” approach – and put distance between your child’s non-hunger triggers and her munchies.

Know your body. “It’s worth talking to the child about the difference between hunger and other feelings,” Edelson says. “Without thinking about those things, people tend to gravitate toward more addictive type behaviors.” Like eating.

Exercise with food. Use mealtime to engage all five senses. Say, “Let’s take this graham cracker. Before you eat it, look at it. Smell it. Touch it. Then put it in your mouth and taste it. Listen to the sounds it makes when you’re chewing it, when it breaks, when you take the bite.” That’s the pleasure of mindful eating, she adds.

Recalibrate behavior. Imagine your child gets off the school bus and he’s had a bad day, Edelson says. He runs to the pantry, but he may not be hungry. Teach your child to stop and pay attention to his body. Instead of digging into those Little Debbies, ask him what’s wrong and brainstorm how he might handle future uncomfortable situations. Instead of binging on sliders the night before the SAT, an anxious teen might jog around the block to relieve stress, Edelson says. A youngster geeked for a birthday party might write a short story about that excitement instead of swiping birthday-eve cupcakes.

Meditate. When the impulse to nosh strikes, urge your child to “take two minutes and just sit quietly. Close his eyes. Deep breathe. And try to pay attention to what he’s feeling.” Then, it’s about choosing a behavior that makes sense for those feelings and thoughts, she says.

Mindful models. “What we model speaks far louder than what we say,” Edelson says. “I can be telling my kids all the right things, and if I’m eating mindlessly, they see that and they’re thinking: ‘Yeah right, Mom, then why are you doing it?'”

Don’t diet. Mindful eating works because it doesn’t involve denying the kids their favorite fare. Don’t forbid what tastes great, Edelson says. “They’re going to want the ice cream that much more.” A cookie’s a snack, but a box of Thin Mints isn’t a meal.