How to Stop Arguments About Money

Money issues in relationships are common, but there are ways to overcome these problems. Get tips here. 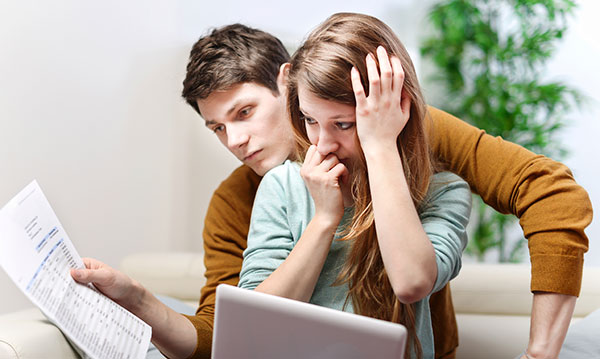 Rachel and Chris Watson of Clinton Township know the meaning of the word “broke.” Several years ago, neither of them were working and the bills were piling up. With no income, the Watsons were forced to make some difficult decisions – including giving up their dream home to move in with her parents until they could get back on their feet. After 18 months of hard work and saving money, they moved back into their home and have regained control of their financial situation – together.

While others may have declared bankruptcy, blamed each other or even divorced, the Watsons made one firm decision.

“Splitting up was never on the table. If you know that no matter what, we will fight for each other and our marriage, then it takes that ultimatum away and you can actually try to figure things out,” says Rachel Watson.

“The decision to move in with our parents was made for us. I had been expecting it for a year or so. Chris seemed to be in denial, but looking back on it, he was trying to be optimistic for me,” Watson says. “He always has felt like a disappointment and didn’t want to let me down again.”

When they started talking, Watson says they realized they had to listen to one another, too.

“It brought us closer and brought calm into our house,” says Watson.

It was tough, Watson says, facing the rest of the world and admitting that they needed help. However, she says she soon realized it was not about other people, but rather their marriage and their family.

“You come to a point that you make the decision not to care what others are saying, because they are not in your shoes. Sure, it still hurts, but no one knows our exact circumstances,” Watson says.

Like the Watsons, many couples have money issues—it’s just not something they talk about. According to a 2014 American Psychological Association (APA) survey, almost one-third of couples cited money as a major sort of conflict in their relationship.

The APA report, “Happy Couples: How to Avoid Money Arguments,” states that there are things couples can do to avoid the conflicts over finances.

“Early on in a relationship, many couples discuss their views on marriage, children and where they want to work and live. Unfortunately, couples rarely sit down together and talk about their financial beliefs and goals. But the good news: It’s never too late to have that conversation. Whether you’ve been in a relationship 10 weeks or 10 years, talking about your money history is a first step to getting on the same page about your finances,” the report states.

“We budget together and talk through our bills. We talk – really talk – and listen to each other and not bring up what has happened in the past, or try not to,” Watson says. “We used to not talk because we thought we knew how the other person was going to react. We have agreed to not do that anymore.”

It may also help to take a financial compatibility quiz to see where you stand.

Work as a team

According to the APA report, only 23 percent of those surveyed shared an equal role in handling the household money. The article suggested regularly swapping the tasks of handling the spending and focusing on savings and investment between the pair. It also mentioned meeting regularly to discuss the household finances, pay bills and review long-term money goals.

The Watsons say it took a while, but they worked out a budget and a plan (check out our checklist for some help getting your finances in order). They regularly discuss it and each of them knows exactly where they stand financially.

“We know going into the week what bills we are going to pay and what we have to spend. Life is still throwing curve balls, but we are at a place where we know we can handle it together and as long as we are together, nothing is so bad,” Watson says.

When money issues become a major strain on the relationship, a professional might be able to help. The “Happy Couples: How to Avoid Money Arguments” report states that psychologists are able to help couples learn to communicate better, which may help with financial disagreements.

Financial planners can also help sort out budget issues and get couples to ask the difficult financial questions.

Watson says the most important part for her family was to focus on their struggle and not to worry about how they stacked up against friends or family.

Growing up is a beast! We've rounded up some lessons and activities to try with kids after watching Turning Red.
Read more
Health

U.S. News & World Report have released its rankings of the best children's hospitals and three Michigan pediatric hospitals have made the cut.
Read more
Attractions