How to Stop Your Kid’s Nail Biting Habit

Read about why kids gnaw on their nails and how you can break this nasty habit. A local pediatrician weighs in. 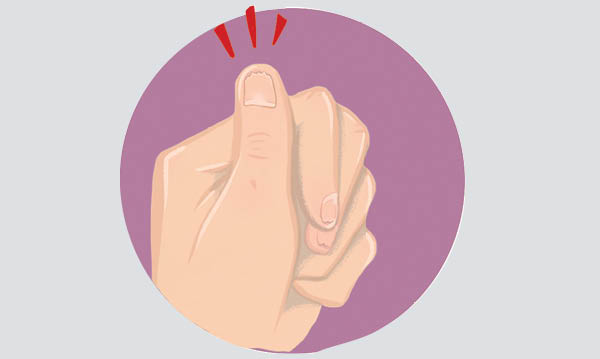 Kids are notorious for putting things in their mouth that don’t belong – including their digits. Nail biting is definitely common; KidsHealth from Nemours reports about 45-60 percent of kids do it. But it’s not always a harmless behavior. We spoke with pediatrician Dr. Sarah Laginess with Beaumont Hospital – Royal Oak, who brought us up to speed on the anxious conduct and how parents can help wean their kids off finger munching.

“When they bite their nails, they’re not just biting their nails,” Laginess says. Kids often chew to cuticles “as well as the skin that surrounds the nail – and your fingernails are ever rarely that clean. You end up introducing bacteria from your mouth into these tiny little pores that you end up making on your fingers, and you can get infections around the nail bed.” The child’s also more susceptible to others’ bacteria and, subsequently, minor illnesses like colds.

Many nail biters also pull or twirl hair or pick their skin. These are called “self-grooming types of behavior,” Laginess says. Kids do this to combat anxiety or may even gnaw when bored.

Gentle, consistent reminders are the first step, Laginess says. “If (you) notice them do it, walk over and very gently pull their hand out of their mouth and say, ‘We don’t chew on our fingers or fingernails.'”

If the polite reminders don’t take, you can place a rubber band on the child’s wrist and “snap the inside of their wrist, not real hard, but just to give a little bit of negative reinforcement.” Or try over-the-counter remedies, like Thum, which act like invisible nail polish and give fingers a bitter taste.

“Maybe it would require a trip into the school to talk to the teacher and see if they’ve noticed anything different, or talking to the parent of a friend that they’re close with and ask, ‘Have you noticed them behaving different? Is there any fighting going on?'” These issues may be causing them to absent-mindedly chew, she says.

If you can identify the child’s stressor, you can curb their anxiety, which “may help them work through (the nail biting) a bit better.”

“It’s not a good idea to do things like smacking their hands. You don’t want to be that kind of negative reinforcement,” says Laginess. “You don’t want to belittle them for it and make them feel bad about it, because then they can start doing it in hiding so that you don’t see it – but it might get worse.”