How to Tell Your Child You’re Getting Divorced

Getting a divorce is a tough decision to make, but it can also be incredibly difficult to tell the kids. Here are tips for helping kids through divorce. 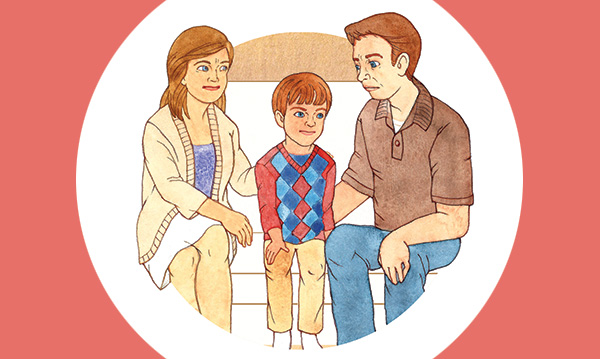 It is an unfortunate truth: Nearly half of all U.S. marriages end in divorce. And the early months of a new year tend to see a jump. Splits “spike” in January and “peak” by late March, a 2012 FindLaw.com analysis notes. For parents, it’s crucial to pair the resolution to separate with a strong focus on healthy communication with their kids.

Dr. Cortney Wolfe-Christensen, a licensed clinical psychologist previously employeed at DMC Children’s Hospital of Michigan in Detroit, says children invariably react to divorce differently. How they come to accept a split is important. “What is in a child’s head is often far worse than reality,” she says. A well-planned conversation can alleviate some of those fears.

Talk as a team. “Present a united front,” Wolfe-Christensen says. “The discussion should be done together and without blame being placed on either parent.” Communicating as a team also lets the child understand both parties take equal responsibility in a divorce.

Plan ahead. Any conversation about a split should be planned out beforehand. It’s critical that parents establish concrete parameters. Nail down as many particulars as possible. Plan to discuss where each parent will live, what the custody situation will be (if known) and what role each parent will play as the divorce moves forward. To start the actual talk, Wolfe-Christensen suggests both parents introduce the split and follow up by explaining that both will communicate and – as much as possible – remain friendly. Parents should also plan to stick to facts, focusing on the child rather than their own personal feelings.

Be reassuring. From the onset, assure children they are loved and will be provided for. And be alert to behavior changes at home and school. If necessary, bring in outside help, whether a therapist or a close relative the child can trust. Also, affirm to kids, “It is not their fault they are getting a divorce,” Wolfe-Christensen says; rather, it is “an issue between both parents.”

Establish concrete routines. Aim “not to change visitation or custody and to notify kids of any changes in schedule ahead of time,” she says. This provides sorely needed stability. A helpful strategy is for each parent to create a calendar. It should always be visible to the child and include each week’s activities, where time will be spent – and with whom. “Kids won’t have to ask, ‘Who is picking me up from school today?'” They’ll know exactly when they’ll see mom or dad again.

Don’t introduce new significant others too soon. “A lot of kids are stuck in the place of wanting mom and dad to get back together,” says Wolfe-Christensen. Kids might feel another partner is “trying to take over being mom” or that “they are not getting enough alone time with dad.” That doesn’t help a child process and cope.

Kids are going to have questions about your divorce, so here’s some advice on how to handle those inquiries.

After watching this sequel, try these activities with your family including a talent show, baked treats and dance party.
Read more
Advice

Here are four kids bedtime mistakes that could be ruining your night — and how moms and dads can fix them.
Read more
Attractions

Best Things to Do with Kids in Southeast Michigan This August

Parents who need a break from the daily grind can enjoy a glass of vino at these local wineries.
Read more