I Hate Disciplining My Kids! 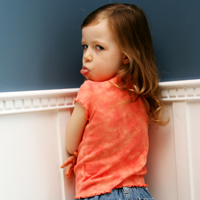 I am not a power-hungry mom. While I do recognize I enjoy a great deal of power and control in our home, I don’t always love to be the parent who makes most every decision for our family and for the girls.

But there you have it.

One thing I have never been as skilled at is disciplining my daughters. It may be, in part, because I’m pretty darn lucky. They are very well behaved and don’t need to be corrected very often. When I do have to dispense time-outs … well, I’m not very happy about it.

Both of my daughters seem to have a self-shaming mechanism that often makes time-outs seem redundant.

At a recent holiday party, my younger daughter Suzi grabbed quick hold of a swaying floor lamp, which inadvertently caused the hard glass shade of said lamp to rock off its pedestal and onto the unsuspecting head of my sister-in-law seated below! The loud “bonk” sound and scream that followed sent poor Suzi into a humiliated tailspin. I had no thoughts of punishing her, but did suggest she might wish to apologize to her auntie. The mere suggestion sent Suzi into anguished paroxysms of grief. She was inconsolable until she fell asleep, still hiccupping with sobs.

My older daughter bursts into tears the minute I admonish her about her behavior, which only happens about twice a year. As upset as Patti gets, it hardly seems worth sending her to her room. Sometimes I even feel a tad played, as I may end up comforting her for being upset that I admonished her because SHE did something wrong in the first place.

What the heck is wrong with this picture!?

I don’t get the sense my parents spent a lot of time feeling guilty for spanking me and my siblings or using other forms of corporal punishment. What kind of wuss am I?

Well, I guess society has changed a lot since I was a little kid. Physical punishment used to be all the rage. Now it can get parents sued! By their own kids!! And while I hate to say it, I probably did worse things by 6 than my kids have begun to contemplate at their ripe old ages of 7 and 9. Of course, there was the time Suzi drew huge centipedes all over our brand new sofa. That resulted in a half-hour (non-violent) nervous breakdown on my part that could feasibly be told on an analyst’s couch at some time in the future, but usually I’m quite even-keeled.

The truth is, heaping tons of punishment on our kids, in my humble opinion, simply isn’t a great idea. And although there are still folks out there who believe hitting children is a necessary evil, I hope physical punishment soon goes the way of the cave people.

My sister, in town recently from Virginia, told me she’d read that the best thing we can do to help our kids get good grades at school is to read to them and never, ever hit them.

Makes sense to me.

Now if I could just get up the nerve to give them time-outs when they deserve them. Even if it makes them look sad.