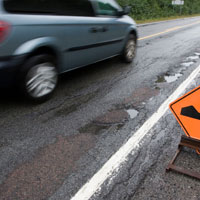 When I had my first daughter, I was leasing a four-door sedan – and it just felt wrong. There were so many things I could not figure out instinctually, like diapering, onesies and that whole burping deal. But down to my very DNA I knew something was amiss because I didn’t have a minivan.

So once my sedan’s lease was up, I joined the army of mothers across our land who can’t fight the impulse to get a minivan.

And it was a tank.

Part of me felt comforted by the fact that I was now just like all the other moms. I had my shiny silver bus with remote sliding side doors and a pull-down DVD player in the ceiling. When I drove around with my two tiny girls in the second of three rows, I could see above all the cars driven by retirees and single folk. I had really arrived to full-fledged parenting consumerism.

But I felt like I should be delivering bread.

The darn thing just didn’t handle very well. I was used to zipping around town. Now I was lumbering. And when the kids were still really small, I had to lift them into the van and then climb up with them to secure their car seats.

My city-slicker sister took one look at it and mentioned something about the environment. Hmmm.

Dropped toys, DVDs and food rolled around the massive square-footage of the van’s floor, never to be found again. The kids were now so far away from me, I couldn’t reach back and touch their feet to get their attention or comfort them while driving. And although it was kind of nice that once parked, I could walk between the front seats to get them out of the second row (if I didn’t smash my head silly on the DVD player), I missed being able to use the always empty passenger seat to keep all my mommy stuff at close reach.

Within six months, I couldn’t wait for the minivan’s lease to end. Just two and a half years to go.

I know that families with lots of kids need a van, because they have lots of people to fill it with. But it was never really practical for little me and my much littler kids. Why is it such a kneejerk parental reaction to run out and get a van the minute we have kids? Is it about keeping up with the Joneses or just really effective commercials for minivans?

Those days may be over, though. Yesterday I saw a TV ad in which a man looked miserable when he found out his wife was pregnant. He walked out to the driveway and looked sadly at his two-door coupe. Then with the magic of TV, he yanked on the front of his car and pulled it out into a sporty four-door. Maybe I’m not the only mom who has grown weary of minivans. Maybe that’s why we’re starting to see some funky new cars that blend the best of vans and cars (they used to call them station wagons).

For now, we’re into our third year with a boring old sedan. I can reach my purse on the passenger seat, tickle their toes while driving and the girls don’t have to wear parachutes when they climb out of the back.