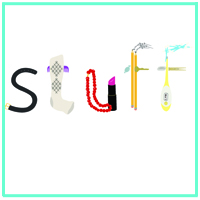 We live in a ranch house with a huge basement. Sadly, that doesn’t mean we have lots of extra living space. Nope. We have nary a play place or rumpus room down there. Why? Because it’s filled with stuff.

I used to love stuff. When you’re a single woman with lots of disposable income (well, I certainly disposed of mine), stuff is all the rage. Why stop at one purse when you can have four? Why have two coffee mugs to choose from when you can have 12? Why have 12 pairs of shoes when no one has beaten Imelda Marcos’s record yet? (If you don’t get that one, Google it.)

I gathered worthless stuff before I met my husband, while I dated him and after we married. When we got a house, we had to merge our stuff. That was disconcerting because, of course, my stuff was interesting and colorful, while his stuff was boring and useless. I worked at packing his stuff away so there’d be room for my stuff. But our stuff was still reasonable then. I have video from before my daughters arrived and even with all that buying, there were spaces in the bookshelves. Drawers were closed. We had a basement.

Then I had kids. I didn’t have to buy any more coffee mugs. Now it was bottles and sippy cups and onesies and toys and baby gadgets of all species. I learned that first-time motherhood is an aspiring hoarder’s dream job! I bought and bought and had parties where people bought for me. It was crazy. And all those nooks and crannies in my house began to fill up with stuff.

But after the kids came a funny thing started to happen. Stuff became less attractive. I lost control. Once someone gave my 2-year-old a game that boasted 100 pieces and I audibly groaned. I didn’t mean to sound ungrateful, but my girls are like little Johnny Appleseeds – they would take those tiny apples from Hi Ho! Cherry-O and spread them around as if planting a cherry tree forest. I’d find one in a drawer, one in the cat food dish and one might get pulled out of the drain with a clump of hair. How do they do it?

Now I’m aware of everything coming into the house, and many go right back out again. Little plastic junk toys in the fun meal? Slipped into recycling. Four radioactive toys purchased at the dollar store with Grandma? Hidden at the bottom of a trash bag. The eighth Webkinz received as a gift? Off to the Salvation Army.

It sounds cruel, I know. But do I really want to teach my girls to be as materialistic as I was? That filling their rooms with worthless little doodads will make them happy? That having endless drawers filled with endless stuff is a good thing?

I vow to start getting rid of stuff. Not just the hair bow for the Hello Kitty that went bye-bye long ago. It’s time to get rid of old purses and clothes that will never again be in fashion and fit me at the same time. And maybe my husband can get rid of some old model airplanes and his beer can collection.

Most important of all, it’s time to stop buying all this stuff. With the money we save, maybe I can rent one of those "take it away" dumpsters to put in the driveway for a week. That’s about the time it would take to fill it up with all of this lovingly amassed – and totally worthless – stuff.