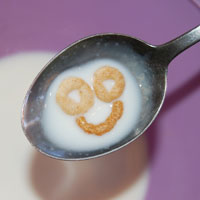 Once my girls could eat solid food, they became little Cheerio junkies. I was thrilled. Carrying Cheerios around in a Ziploc bag had me prepared for every breakfast and snack, and I felt good that they were getting whole grains with a minimum of sugar.

But as their enthusiasm for Cheerios waned ("That’s for babies and it tastes boring!"), I had to find a replacement breakfast food. This was especially tricky once both of them were in school full-time, and I had to prepare said food and serve it sometime between the moment they stagger out of bed in jammies and bed-hair at 7:20 and wander out the door looking lovely at 8.

But if they wouldn’t eat Cheerios, what cereal? I moved up to MultiGrain Cheerios. How perfect. A little extra sugar to attract the girls and it sounded so, so healthy.

But after a few months, my husband chimed in his opinion that the extra sugar in the new brand was bad for our kids. Shame on me.

For me, cereal is one of those headshake-provoking mysteries of modern motherhood. Just like the necessity of car seats and bicycle helmets, the impossibility of giving my kids the same cereal I used to eat took a bit of a mental shift. I have to accept the idea that what was good enough for me as a kid simply will not do for my children!

When it’s a safety issue, fine. But cereal, a major health concern? Really?? Eh, whatever. If the cereal they want is terrible for them, we’d just skip cereal all together.

And that is how I became a short-order breakfast cook for my 6- and 8-year-olds. That meant I had to keep a well-stocked fridge of breakfast foods like bagels and cream cheese, bacon, eggs and even calcium-enriched frozen waffles and real syrup. Mostly, I was aiming for protein and calcium.

So every morning, I ran around the kitchen like a maniac, cooking or toasting foods to please both palates. And a recurrent fight surfaced with me begging Patti to drink some water or juice to go along with that heavy food. But she insisted she was never thirsty.

Another battle would ensue every time we passed the cereal aisle at the grocery store. They wanted the cereals they had tried at their friends’ houses or seen on TV, cereals that even I really couldn’t approve of. I have to admit if it’s rainbow-colored and filled with marshmallows, how healthy can it be? That just fueled my continued need to prattle about the kitchen, firing up fry pans and toaster ovens during the busiest half hour of every school day. But it started to make me a little grumpy.

Time was coming for a compromise.

So one day in the cereal aisle, we took a long, hard, comparative look at ALL the cereals – their ingredients and calories and fat content and all that. Best thing I ever did. We found a cereal that was healthy enough for mom to serve, and ran enough commercials on the Disney Channel to assure the girls it had to be good.

And they liked it. (Trumpets sound! Doo-doo DOOO!)

Every now and then, I do mix it up with other stuff, but most days they are happy to have the new cereal – which takes me 30 seconds to "prepare." And they eat it with milk, which means I’m sneaking fluids into Patti, so we don’t have to fight over it.

So why did it take me two years to come to such a simple solution? I gotta stop skipping breakfast.