I Love Our Family Dog 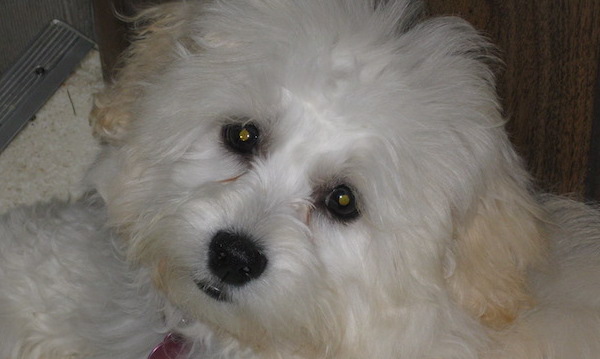 I guess our pets tell the world a lot about us.

In our house, Suzi doesn’t like the three cats much, as she doesn’t think they are terribly cute and Gabi likes to lick her face at 3 a.m., which Suzi finds rather repulsive. But she loves our 9-pound, fluff-ball puppy Q.T. because he’s happy and playful and cute. That’s good enough for Suzi.

Patti loves them all – especially the dog, who has energy from morning to night and could run through fields with her all … day … long. Patti knows that since she wants to have all these assorted pets (yes, even our two fishies), she should help take care of them. For good-sport Patti, taking care of them is even one of the perks.

My husband loves any animal that will sit beside him happily on the couch. The cats he especially loves, because they are soft, ever-sleepy and un-demanding. The dog? Well, he appreciates Q.T.’s energy and awe-inspiring cuteness. But Q.T. is not un-demanding. He wants to play and poop and eat and play some more. He also likes to chew through Bill’s many video and computer cables. This is a no-no. Bill likes the dog, but blames his presence on the crazy person who brought him into the house.

Which brings us to me.

I am the crazy person who brought Q.T. into a house I wasn’t fully in control of to begin with. After so many people asked the dreaded question – “What the &*#$ were you thinking?” – I had to analyze the why of it.

I’ve written before about Half-empty Nest Syndrome. It’s my term for that feeling when the kids go to school full-time and there aren’t so many souls to take of anymore. But it’s more than that. Now that we’ve been married for 13 years and the girls are approaching their tween years, well, I’m not getting the sort of enthusiastic esteem I used to receive from all these humans in my house. Even the cats, who are 9, 9 and 3 years old find it hard to muster any excitement for me anymore – unless their food dishes are empty, of course.

The minute Q.T. looked at me that first time, my heart started walloping. Even though we had just met three other adorable, fluffy puppies, there was something in the way Q.T. responded to me that made me feel special: His tail wagged his body, his tongue hung out long, he piddled! He wanted to be my pal! I had to have him.

Four months later, the honeymoon is not over, but I am a bit weary. And yes, I know he gives that same enthusiastic greeting to every man, woman and child he meets, so I’m not the only one he adores. But in the fading days of my kids’ childish wonder, that is being replaced by jaded, pre-tween angst, I get many boosts throughout the day from Q.T.’s loyal camaraderie and dopey joie de vivre.

… Even when he’s chewing up, and spitting out, his fourth tissue of the day.