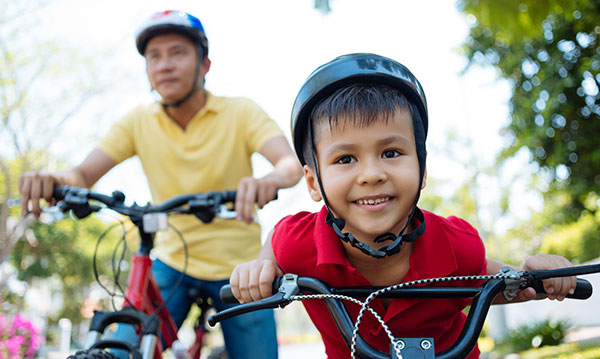 People across Michigan and beyond heard the horrifying news this week that five adults were killed on Tuesday when a driver in a pick-up truck plowed into a group of bicycle riders in Kalamazoo County.

Four other people were seriously injured and the driver is being charged with second-degree murder. While this tragic incident may not have been preventable, it’s a reminder for parents and children to be extra vigilant when out on their bikes this summer.

“Most kids learn by mimicking and they learn so early and they’re so willing to learn,” she says. “If you start them out wearing a helmet, they’re going to always wear a helmet.”

The current trend toward more bicycle use among children and adults is a positive thing, she says, but it’s important that everyone in the family knows how to be safe.

“We also need to teach them the proper ways to ride,” she says.

Cheryl Bowker, a local Allstate agent and mom of three grown children, has helped organize the Passport to Safety event in Livonia for many years. The event, coming up June 11, 2016, features bike safety lessons, free helmets and more. Bowker wanted to help educate the community about bike safety after her son fell off his bike years ago.

“When my son was young it wasn’t in vogue or it wasn’t talked about a lot to wear helmets. He actually went over the top of his bike and ended up losing his two front teeth and having a terrible concussion,” she says. “For me after that it was just about learning all about the safety of riding a bike and making sure that other kids in the neighborhood, and my own kids, were more prepared.”

Talk to your children about these important bike safety reminders before their next ride.

1. Get the right-sized bike and helmet

Ask a professional for help if you aren’t sure how to get the right fit.

“Families go inside stores, (helmets are) always categorized by age and they don’t really understand how to fit a helmet properly,” Cain-Jones says. She recommends the “two finger rule” – a two-finger gap between the eyebrows and the helmet and you should be able to fit two fingers under the chin strap.

2. Make sure you can be seen

“One of the biggest things is making sure they have the proper clothing on. Something that’s reflective,” Bowker says. Also equip your bike with light reflectors on the front and back.

3. Do a safety check first

“You always want to do a bike check before you go out,” Bowker says. Make sure your tires are inflated, your bike and helmet are fitted properly and your reflectors are working.

Also check your brakes and make sure your shoelaces are tied, Cain-Jones says.

“Shake your bike really hard, look at the wheels,” she says. “Is your chain hanging? Are the brakes working properly?”

4. Watch for cars in driveways

Whether you’re riding your bike down a residential or commercial street, be on high alert for cars – especially vehicles that may be backing out of driveways.

“Make sure you’re talking to the kids about looking at the street you’re going down,” Bowker says.

Ride in the same direction with traffic, stop at stoplights, follow speed limits and walk your bike across busy streets, Cain-Jones says.

Bike riders should pass on the left, alert people to their approach with a bell or horn and never ride between parked cars, Bowker says. Most of all, be predictable.

“Ride in a straight line, don’t be messing around on your bike because drivers have to be able to anticipate,” she says. “Being on a bike, you need to be just as conscious as if you were driving a car of what’s going on around you at all times.”

Don’t ride on handlebars or allow anyone to ride on the back of your bike, Cain-Jones says. It’s a common cause of injuries. Children must also learn to be alert to their surroundings.

“A lot of times kids are just riding and not paying attention to what’s going on in the road,” she says.

Riding on the sidewalk is best, Bowker and Cain-Jones recommend, as experts advise against children under age 10 riding in the street.

“They found that kids 10 and over have a better mechanism for better decision making,” Cain-Jones says.

Your child should be wearing a helmet by the time she can even ride a tricycle, Bowker says. It’s all part of modeling safe biking habits.

“They’re never too young to start learning,” she says. “The minute they can go on that tricycle they need to have a helmet and be learning some of the rules.”

“It is promoted that you ride in a group,” Cain-Jones says. “We tell kids when they’re riding period, no matter how old they are, to ride with an adult.”

When out as a group, families should typically ride single-file.

“A grown up in front and the back,” she says. “That way you all are watching out for each other and you can make sure everybody is doing what they’re supposed to be doing.”