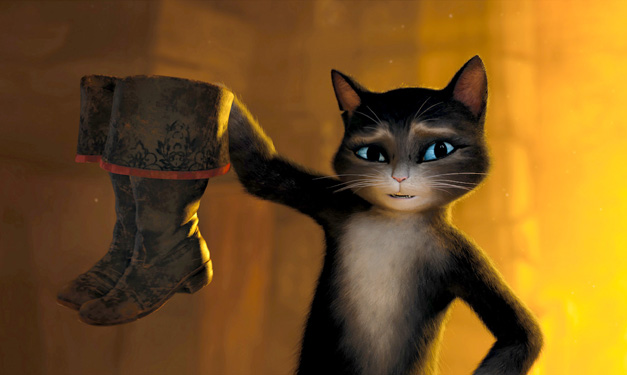 Shrek fans know: It was all about the cat. So much, in fact, that the swashbuckling Puss in Boots is the star of his own eponymous movie. Returning is Antonio Banderas as the tiny-but-tough feline who uses his cuteness to get away with murder – literally, as we finally learn how the cunning cat came to be hired as an assassin to kill Shrek before having a change of heart. This time, Puss is joined by romantic sidekick Kitty Softpaws, voiced by Salma Hayek.

Before the film opens on Oct. 28, 2011 the actress and mom chatted with MetroParent.com about the spinoff, her parenting advice – and how Kitty Softpaws is the purrfect role model for little girls.

Motherhood has to be your priority. I have a support team, but I really do believe that kids have to be raised by the parents. It’s important for them to feel that it’s you taking care of them.

When I used to be like, “I’m bored,” my mother would tell me, “Only stupid people get bored. Smart people never get bored because they have a vast imagination and a brain that can always find something productive or exciting to do or imagine.” It really stuck with me for the rest of my life.

I found myself watching Shrek just to see the cat. That eye thing that he does! And in this movie, you see him as a baby. It’s intolerable how adorable he is. He’s one of my favorite cats.

I did watch Tom and Jerry a lot, but I was more of a Jerry kind – and Garfield! Not so much in Mexico, though. I come from a (household with) one television channel, and – I’m almost 45, so this was a long time ago – there were not so many choices for children. When I was growing up, we got one hour Wednesday night – it was the big day!

You won’t believe this. I was under the habit of rescuing animals myself – not going to pick them up from the shelters, but actually turning my house into a shelter! So I have, as of right now: five parrots, one cat without a tail that was rescued by one of my 10 dogs, four ducks, 20 chickens, five horses, two guinea pigs and four alpacas.

Kitty Softpaws is sassy but not sexy. She’s ingenious, smart and very coquettish and uses her charms. She’s a strong woman that speaks her mind and is very good at what she does, even though what she does is not something that’s very good. It’s great for girls to see the strength in a female.

On being a mom

I am a crazy mother. My daughter likes to play actress, which is not very convenient, because sometimes I work a whole day and I just want to go home and be me. I did four movies this year, and then I have to come home and be the gardener or – a chair!

I dress up with her and we play cards. We love to dance together and make houses. I love to draw with her. We really love to scare each other. Thank god I have a healthy heart!