Is Your Kid Arrogant? Take Our Quiz!

With good intentions of boosting kids' confidence, parents sometimes miss the mark. See how you're doing with this arrogance quiz. 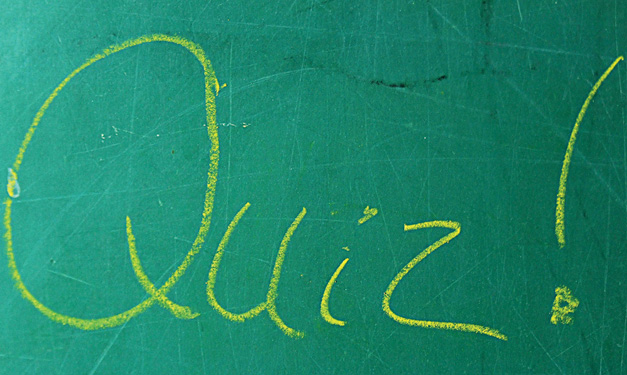 There’s one area where American kids really outshine their peer students in other countries. Darn right: Arrogance! OK – so maybe it’s nothing to brag about. But turns out children in the States are more likely to think they aced a test when they only did so-so. Are you possibly contributing to your own child’s over-confidence? Take this funny (yet informative) MetroParent.com quiz to get a sense of where you might buckle down – or lighten up.

1. You child shoots the winning basket, breaking a tie and pushing the team to victory. He shouts, “I did it! I scored! I WON!” What’s your instinct?

A. Do a victory lap around the court and plot out his NBA future over a celebratory dinner and dessert.
B. His ego needs serious deflating. You declare, “Well, it took you all night to score a basket; you only managed at the last minute. It goes to show you never know how things will turn out.”
C. Say, “You scored for the team. I’m really proud of how well you worked with your teammates. Remember: Luke set you up for that three-pointer.”

2. After spending hours preparing (he says), your kid comes home to proudly report he got a C on his spelling test. You respond by:

A. Demanding to know how much time he really spent studying, then promptly grounding him for a week and removing the Wii from his room.
B. Commending him for his efforts, then exploring what gave him difficulties – and maybe working out some better study habits.
C. Ranting about his incompetent teacher (who barely even spent time on that chapter!) and firing off an email demanding the grade be reevaluated.

3. Your high schooler gets accepted to one of her top college choices. She calls all her BFFs to brag. How do you react?

A. No big deal. Your daughter worked hard and deserves praise. She’s confident, and you don’t blame her (in fact, you might even join her).
B. Tell her that while you’re proud of her accomplishments, it’s important to be humble and sensitive to her friends who may not have received such good news. And, after all, that tutor helped her out quite a bit.
C. Boasting gets zero tolerance in your home. You inform her to tone it down, missy: High school is a walk in the park compared to college!

4. During a math test, your child and a friend get caught cheating. Both wind up in detention. What do you say when you get the news?

A. “You should know better – I didn’t raise a cheater! You can forget about a social life for the next two months. You’re grounded!”
B. “I guarantee this isn’t the first time Scott’s been caught cheating. It’s not fair that you got dragged in. I’m calling the principal and clearing this up.”
C. “I’m really disappointed in you. You’ll serve detention. Then we’ll figure out what’s causing you trouble in math so you can succeed on your own.”

5. You’re shopping with your daughter when a woman comes up and comments how beautiful she is, asking, “Does she do any modeling?” You …

A. Thank her in a level tone – and encourage your daughter to do the same. You explain that your daughter doesn’t do any modeling now, but you’re trying to teach her to be kind and grateful to others.
B. Gush your gratitude. No, you haven’t looked into the modeling yet, but “that’s what everyone tells us!” Does the woman have any suggestions?
C. Reply, “Well, thanks, but looks aren’t everything. We’re trying not to raise an egomaniac.”

6. You overhear your child bragging that his dad makes more money than another child’s. When you broach the subject later, what do you say?

A. “Honey, we’re fortunate to have nice things, but it might not always be that way. After all, Tommy’s dad was recently laid off. It isn’t kind to brag.”
B. “How would you like it if Tommy rubbed in how much better his grades are? You wouldn’t like that so much, would you? Didn’t think so.”
C. “Now, sweetie, it’s true that we’re better off. But maybe next time you can talk about the stuff you have thanks to daddy’s job – like your new iPhone.”

7. In art class, your young son asserts that his macaroni masterpiece is better than any other kid’s – and he’s the best. How do you handle this one?

A. Make your kid march up in front of the class and apologize for his behavior – after a stern lecture from you, that is.
B. After a heart-to-heart about tactfulness, you consider finding a community ed class that will challenge and grow his skills.
C. Well, it’s true: This kid has a gift. You start Googling for the best easel and pastel-paint set you can find, eager to nurture your budding Picasso.

8. Your kindergartner successfully brushes her teeth and dresses herself. Wanting to urge her to continue enthusiastically tackling these chores, you:

A. Give her a special treat – pancakes with extra syrup – and sing her praises at least 10 times before dropping her off at school.
B. Secretly grin at her mismatched little outfit, but tell her you’re proud that she’s learning how to do her daily tasks by herself.
C. Huff that her socks don’t match and there’s still food between her teeth. It’s almost worth the hassle of just doing it yourself!

Your score: 8-13
While there’s no crime in thinking your kid’s the cat’s pj’s, you might be veering on overboard. If you tend to react to her triumphs with effusive praise – or, on the flip side, handle her flubs by passing blame to someone else – you could be doing more harm than good. Help your kid develop a knack for viewing mistakes as learning opportunities – and successes as a reward for their grit and perseverance (and, often, a result of teamwork!).

Your score: 14-19
The opposite of over-inflated praise doesn’t mean swiftly bursting your child’s bubble. Focus on being patient when your child gets boastful, lets you down or doesn’t grasp a new skill at first. Bite your tongue on blame and, rather, coach. What went wrong? What could he do different next time? What strengths do his classmates have? How can he be supportive of others? It’ll empower him to think and act differently the next time.

Your score: 20-24
There’s a fine line between confidence and arrogance – and you seem to be navigating it pretty well. You offer earnest praise with perspective. At the same time, you’re not afraid to express your disappointment when your child makes mistakes (and, importantly, try to get to the root of the problem collaboratively). To boot, you’ve got an eye for knowing which battles are worth fighting. Keep that level head up – especially when things get hairy!

What did you think of this quiz? Did you hate it or find it informative? Tell us in the comments!

College can be scary and confusing for both kids and parents. Here's a guide for parents on preparing their kids for what is yet to come.
Read more
Healing Haven