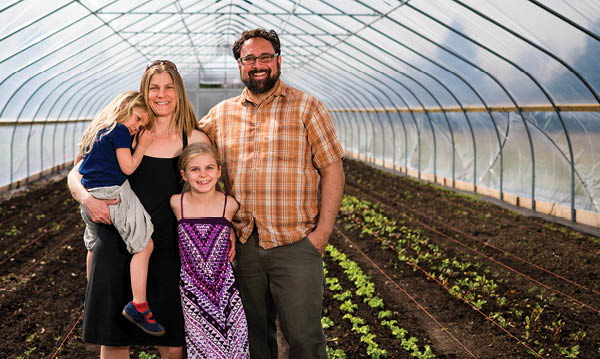 “Like dogwood and maple trees,” explains her dad, who manages the University of Michigan campus farm located in scenic Matthaei Botanical Gardens. “She didn’t want to throw them away at the end – she really cherished them.”

Appreciating the natural world runs in the family. Mom Elissa Trumbull runs a healthy food access incentive program helping low-income families eat more fruits and vegetables, while dad teaches and manages at the Ann Arbor farm. In his current role, he gets college students interested in growing their own food – and he previously spent more than a decade as farm manager at the Michigan State University Student Organic Farm, too.

Moghtader says his grandparents were farmers from Charlotte, Michigan, and he spent time working on the farm with them as a kid.

“I’ve always loved being outside,” Moghtader says. “Being on the farm wasn’t like work – it was like entertainment.” After drifting away from it, he was drawn back as an adult. “I realized I had a passion for the natural work and humanity and our social systems, and food is the place where those come together.”

Chips off the block

This zest is something he’s sharing with both of his children – Zea and Samara, 4. Whose names, by the way, are actually inspired by plant life. That’s right. Zea is a genus of plants in the grass family, which includes corn, and Samara is the winged fruit, like on a maple tree, more commonly known as “helicopters.” His girls are no strangers to the outdoors. Moghtader says the best way to get kids involved with nature is to do it in an unstructured way – like a simple walk outside. As for the Moghtader-Trumbull family, they love strolls at the Bird Hills Nature Area in Ann Arbor and gardening at home.

“They have a really strong appreciation of the outdoors and food and the importance of being grateful and thankful,” he says. “They’ve always been super excited to garden or go to the farmers market.”

They’ve also gone on bigger adventures, like camping along the shore of Lake Michigan.

“(Zea’s) first backpacking trip was when she was 5 months old,” he says. “People ask us, ‘How do you bring your kids out into the woods?’ We say, ‘They don’t know any different. This is natural to them.'”

“I think there’s something really exciting for most kids to see the act of something growing and then eating it,” Moghtader says.

Starting a garden of your own is the best way to give kids hands-on experience with growing their own fruits and veggies, he says. Moghtader suggests starting small – “beans or peas are easier to grow than other things” – and working your way up to something more challenging, like broccoli or watermelon.

He says kids don’t really care what is being grown. For them, the process is more interesting.

“They just really like the act of planting a seed,” he says. “They like hunting for the fruit as much as any part of it.”

Moghtader says growing your own food is a great way to expand your child’s palate, too.

“(Samara and Zea) are definitely more apt to try the food that we grow,” he says. “My younger daughter loves cherry tomatoes, while my older daughter doesn’t like them – but if she’s grown it, she’s more apt to try it and eat it.”

Now that spring is here, Moghtader says any time in May is a great time to plant things like broccoli, kale, cabbage, lettuce and carrots, while tomatoes, peppers, cucumbers, zucchini and basil should be planted near the end of the month. To get the soil ready, he recommends turning it with a shovel and adding one to two inches of compost on top or lightly mixed in. Moghtader says he and Trumbull believe in building positive associations with healthy food through gardening – especially since advertising often ties good feelings to unhealthy food.

“We feel strongly as a family that eating healthy food and eating food that we’re connected to in some way is an important part in keeping ourselves healthy and supporting our community,” he says. “I think gardening helps provide positive experiences and relationships with food that are healthy.”

Make a trip out to this farm and garden wonderland, located at the University of Michigan campus. Learn more at lsa.umich.edu/mbg.

1. Hakurei. “this is a very special salad turnip. it’s watery, buttery and crunchy.”
2. Cucumbers. “we all love cukes!”
3. Sun gold tomatoes.
4. Kale.
5. Lunchbox peppers. “My kids like that they’re little and that they can eat them without preparation.”