Election season is the perfect time to teach your kids about our democracy and these kids books about U.S. elections can help you start the lesson. 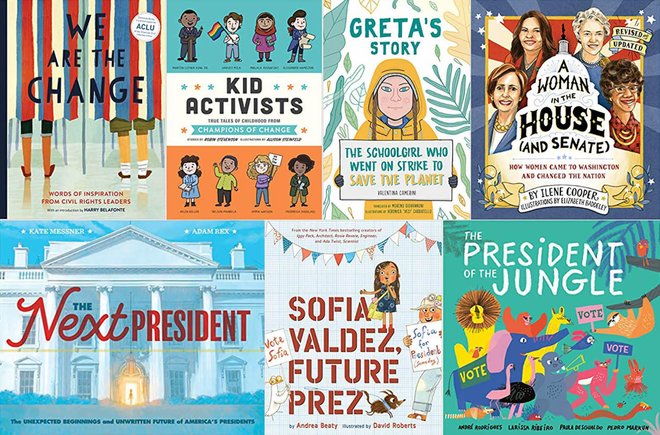 Election Day is coming up. If your kids have seen political ads or heard enough talk at the dinner table and school to start asking questions or want to be involved in the election, there are a few books that can help jumpstart their political careers, even before they’re old enough to vote.

From biographies to explanations of change to activism, kids can understand how our country was formed and shaped, and how they can right the wrongs in their world.

Part of the Future Baby series, the book explains in simple terms how babies and presidents are similar: For example, “when baby speaks, people listen.” A perfect primer to explain the basics of the presidency.

Get Up, Stand Up, by Cedella Marley

Based on the chorus of the song made famous by Bob Marley, Bob’s oldest child uses the words to show kids how to make good decisions to act in everyday situations. While a group of young friends goes through their day, they encounter bullies and scenes that elementary schoolers know well. Standing up for yourself, your friends or a situation you think isn’t fair is the message for preschool-aged readers, with Marley’s anthem as its base.

From the author and illustrator of Ada Twist and Rosie Revere books comes Sofia Valdez. After encountering a pile of trash where a park should be, Sofia sets to work to take on City Hall. This book of rhyme is the perfect start for kids of all ages who want to make a change, even a little one, in their corner of the world.

The President of the Jungle, by Paula Desgualdo & Pedro Markun

In a jaunty, non-partisan tale, kids can learn how an election works. After the lion diverts water for his own swimming pool, the jungle holds an election. With many candidates – and seven key voting rules – an election is held. The book includes a glossary of terms for young readers to understand what a democracy is and how an election is run.

For Which We Stand, by Jeff Foster

Author Jeff Foster is a teacher at Marjory Stoneman Douglas High School in Parkland, Fla. His book is written in comic-book style, with hand-lettered font and graphic images that describe concepts like forms of government, the branches of government and the electoral college.

The Next President, by Kate Messner

Does the president of the U.S. elected in 2032 know he or she is going to be president? With that concept in mind, Kate Messner tells about the locations in history of where future presidents were when a current president was inaugurated. For instance, in 1961, the year John F. Kennedy was inaugurated, there were 10 future presidents alive, ranging in age from just born (Barack Obama) to serving in Congress (Gerald Ford) to serving on his local school board (Jimmy Carter). With beautiful illustrations by Adam Rex, the pre-presidential history of each of the 45 presidents is viewed while the question is asked: so where is the next president? Available for preorder, released March 24, 2020.

There aren’t many late elementary or middle school students around the world who haven’t already heard of Greta Thunberg and her school strike for climate change. This chapter book explains her Asperger’s Syndrome and how it impacts her drive as an activist. It also explains how she found the courage to talk to the United Nations as a teenager.

A Woman in the House (and Senate), by Ilene Cooper

In the 100 years since women won the right to vote in the United States, more and more women have made history in the country’s capital. From Jeannette Rankin, the first woman elected to Congress, to Shirley Chisholm, the first black woman in Congress, the movement of female activists from all parties is documented, along with their successes in passing laws. The updated version of this book includes the addition of the 117 women elected to Congress in 2018.

Kid Activists: True Tales of Childhood from Champions of Change, by Robin Stevenson

Everyone has an origin story, even future political activists. Kids in late elementary school can read about – or see themselves in – the stories of leaders like Alexander Hamilton, Rosa Parks, Frederick Douglass, Susan B. Anthony, Emma Watson, Malala Yousafzai and many more. The impact these kid activists had later in life isn’t as detailed as how they got there. With comic-like illustrations by Allison Steinfeld, kids will be drawn in by the short chapters and stories of history-changing grownups who were once children, too.

We Are The Change

In this book, 16 children’s book illustrators took on the task of putting pictures to the words of famous leaders and activists. The quotes come from Frederick Douglass, Eleanor Roosevelt, Dr. Martin Luther King Jr., Helen Keller, Barack Obama and more. Each illustrator also provides a brief biography and explanation of the activist he or she is drawing for.