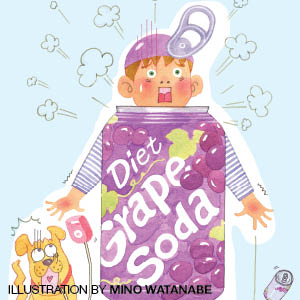 Back in 1879, a chemistry research assistant named Constantine Fahlberg discovered the first artificial sweetener, known as saccharin – by complete accident. Today, such sweeteners are everywhere, used in thousands of drinks as a way to cut calorie intake and keep waistlines slim.

And according to a study published in the September issue of The American Journal of Clinical Nutrition, artificial sweetener consumption has doubled in the United States over the past decade.

This figure includes kids, too. A reported 12.5 percent of children are consuming artificially-sweetened drinks on a daily basis.

So what is causing the spike in low-calorie beverage consumption in kids, specifically, and what are the consequences in the long run?

"Over a third of children are overweight or obese," says Dr. Wendy Miller, director of Beaumont Hospital's Weight Control Center.

According to the Centers for Disease Control, approximately 17 percent of children and adolescents ages 2-19 are obese – a figure that has more than tripled in 30 years.

And since sugary drinks are linked to the high rate of obesity in the United States, it appears that parents may be switching their kids to beverages with low-calorie sweeteners in an attempt to keep caloric intake down.

However, there is no evidence, Miller says, that demonstrates whether sugar substitutes are better than sugar when it comes to health and weight management.

While sugar has been associated with diabetes and weight gain, the long-term effects of artificial sweeteners are still unknown.

What experts and parents do know is that diet and regular pops have absolutely no nutritional value and do nothing for a child's overall well being.

Coca-Cola alone sells 1.8 billion servings of its beverages (some of it bottled water) on a daily basis. That's a lot of empty calories parents and kids are chugging.

"The more kids drink pop, the less likely they are to be meeting their health requirement with dairy," Miller says.

For Michelle Scott, a mom of two from Fraser, the decision to limit any kind of soda from her children's diets started with her own parents.

"I grew up never being a pop drinker," Scott says. Her parents did not drink pop – diet or regular – on a daily basis. Instead, they reserved it for weekends or special occasions, which is a method that Scott adopted with her daughters.

If she's going to give her daughters pop, then it's "definitely regular. Not diet, because of the artificial sweeteners like aspartame," she says.

Artificial sweetener aspartame has gotten a bad reputation over the years because of some reports of harmful side effects.

However, according to a 2007 article in Medical News Today, there was no evidence that aspartame found in diet pop causes cancer and neurological damage.

The takeaway for parents

Health experts are torn on whether diet or regular soda is better for kids, but all agree that it's important to limit servings and teach healthy habits that kids can carry with them throughout their lives.

Miller suggests limiting pop to one serving or less per week. A single serving is eight ounces, which is smaller than the standard 12-ounce can of soda.

Aside from the occasional treat, parents should focus on giving their children nutritious beverage options.

"In general, it's recommended to have three servings of dairy a day," Miller says. "It could be low-fat cheese or healthy dairy. It's recommended for kids to get at least four glasses of water."

And parents play a key role when it comes to consumption.

"It is very important for adults to lead by example," Miller says. "If you're teaching kids that diet and regular pop is a treat, you should be treating it this way, as well.