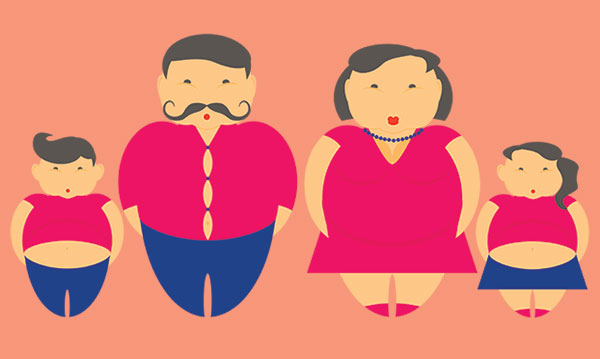 Growing up in a big family could have an extra benefit that you wouldn’t expect.

A new study from the University of Southern California found that kids from larger families are less likely to be obese, Pacific Standard reports.

The study sought to determine whether the decrease in the typical American family size over the past several decades is related to the sharp increase in childhood obesity rates over the same time period. Between the 1960s and late 2000s, the average number of children in a family went from 2.44 to 1.86 while obesity rates went from five to 17 percent, according to the report.

Possible explanations mentioned in the study include less eating out among larger families and less time spent watching TV. Kids with siblings also were found to have more adult supervision, which could mean they’re less likely to binge on unhealthy foods, according to the Pacific Standard article.

“Larger families generally have to think about how they spend their budget,” she says. “Meals are generally cooked at home and we know that meals cooked at home have higher nutritional value.”

The screen time factor also makes sense. “When there’s more people sharing their screen time you don’t have as much of what you want and you might find alternative activities to fill up that time, which we hope would be going outside,” Fry-Riggins says. “Plus, you have playmates all the time.”

The study offered only a correlational – not causal – relationship between family size and obesity rates, she pointed out, and it’s important that larger issues are considered such as the family’s approach to overall health.

“I didn’t get a sense that they were looking at what the parents promote among the children. Is this a family who decides on Saturdays that they take bike rides, pays attention to what’s in our foods and promotes healthy behaviors? Do they limit screen time?” she asked. “A lot of families can say, ‘You only have a half-hour of screen time per night,’ and that could go for large or small families.”

While new research is always coming out about the factors that could influence issues such as obesity, the key takeaway for families should be promoting a healthy lifestyle for everyone in the household.

“A lot of the studies that come out make parents question their own common sense,” Fry-Riggins says. “I want to encourage parents to believe in the idea of setting up the environment where you have a healthy relationship with food.”

Ensuring kids get three healthful meals per day and two snacks is a good place to start. It also helps to teach portion control, encourage kids to listen to their body’s cues by not eating when they’re full and to use non-food rewards whenever possible.

“We don’t talk about putting our kids on diets, but really encourage them to learn about eating from all of the food groups and making healthful choices the majority of the time,” Fry-Riggins emphasizes. “We don’t want to promote deprivation among our children, just helping them understand how do I make a good choice in what I’m going to eat and picking from a diverse amount of foods that are available … It’s about setting up a healthy food environment in your own home no matter how many children you have.”