A Local Mom with Some Serious Pipes

Kim Johnson, local veteran bagpiper and mom, reveals how she got into playing and her secrets on how to raise a musical family. 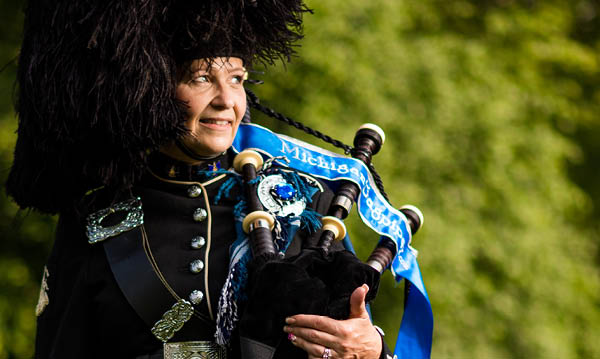 Before Kim Johnson became a fulltime bagpiper, her days of juggling gigs looked a bit different than they do now.

Her kids – all six of them – were young then, and she remembers a few times when they had to pile into her van, park at a local cemetery and entertain themselves in the car while mom played the pipes for a funeral just steps away.

“They would play in the car right next to me,” she laughs, recalling the forts her kids would make in the backseat. But tagging along on mom’s gigs? “They just thought it was normal.”

As a rare female bagpiper with a knack for the unusually difficult-to-play instrument, Johnson’s talent because increasingly in-demand and soon – once her youngest started kindergarten – the Troy stay-at-home-mom was turning her side job into a business.

“It just kind of snowballed,” says Johnson, whose kids are now 21-30 (most play an instrument, from cello to string bass) and who lives with her husband, three of their children and one grandchild (“It’s like all the fun without the work,” she says of her promotion to “grandma.”)

Though she played several instruments growing up, Johnson never considered the bagpipes until her parents brought her back a practice “chanter” (just the stem portion, for the mouth and fingers) from Scotland when she was a young teen.

“I’m looking at it like I have no clue what this is,” she laughs. But soon she learned to play it and enrolled in a piping class in Farmington Hills. “I loved it and I just got hooked on it.”

Once she had her first real set of bagpipes – a gift from her parents when she graduated high school – she started playing in a bagpipe band, performing at parades and teaching lessons.

Today, now with more than 35 years of experience under her kilt (and she does rock one), Johnson plays at funerals, weddings and special events for her business – plus in the pipes and drums band Cabar Feidh with one of her daughters.

It’s in the blood

With Scottish heritage on both her mother and father’s side, Johnson grew up aware of her family’s background and became increasingly interested in it during her teen years.

“The Scottish families are very interested in their clan, which group is their family,” she says. A first trip to Scotland after her high school graduation sealed her passion.

“Oh my gosh, I felt like I was home. It was so hard to leave,” she recalls. “I cried when I had to get on the plane.” She returned again with her parents during college.

The joy of playing

What makes playing the bagpipes so special for Johnson? In a way, she says, it’s like being transported to a calmer and more peaceful place.

“I can just close my eyes and play and play and play. Maybe it just speaks to my spirit or something,” she says. “The music is just really moving. I think it just touches that part of me that’s Scottish, my heritage. I love it.”

And she’s not alone. Her customers often say the bagpipes give their events something special that sticks with them.

Not all songs can be played on the bagpipes – it only has nine notes, after all – but Johnson says she knows hundreds of songs and enjoys playing fan favorites like the Star Wars theme and the University of Michigan fight song.

But song suggestions aren’t the only unusual requests Johnson gets. Once, she got a call from a young boy who found her information and wanted her to play at a funeral for his pet mouse. “I tried not to giggle; it was so cute,” she says.

Another odd request? “‘Well, do you know a guy piper?'” Johnson sighs.

“It’s unusual for a woman to pipe – very unusual,” but times have changed, she says. “It’s not an instrument of war anymore like it was in World War II for the British. It’s just an instrument now.”

Fortunately, “most of the people call and say, ‘Oh, a female piper! That is so cool.'”

Interested in your child playing the bagpipes? Johnson says starting young is great. “About 7 is the perfect age,” she says. “They want children to start at a really young age because they have that finger dexterity, they have the interest. Some of the best pipers in the world started as young children.”

A practice chanter costs about $70 and a full set of bagpipes starts around $1,000.