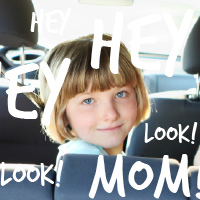 I have no reason to like backseat drivers. Once I was driving my beautiful new car and my husband Bill thought I was making too risky a move through a yellow light. He suddenly screamed, "Nooooooo!" – scaring the heck out of me and causing me to stomp on the brakes. We stopped in plenty of time. I turned to ask why he had done that, but was interrupted by a SMASH! A car plowed into my shiny new rear end.

That experience taught me to mostly ignore his comments in my car, but didn’t quite prepare me for a future driving around with two noisy little critics in the backseat.

Honest, all I want to do is keep my family safe when I’m driving. But they seem to have different ideas. From the time Patti cried halfway to Cedar Point when she was a toddler to the time Suzi threw up a days’ worth of food in the car, it’s been a challenge keeping us all on the road and out of trouble.

But those events were not the girls’ fault. Those actions were caused by nature itself.

The annoying actions I’m talking about have occurred in more recent years.

My little drama queen Suzi has a bad habit of suddenly screaming in the car, causing my ears to pop in our close, medium-sized family sedan, and my hands to grip the wheel as I look for whatever Mack truck she must see coming for us. But no. She is only amused, angry or fighting with her sister.

A few years back, Patti would grow tired of waiting for a red light to turn green and demand that I proceed through the intersection immediately. I would try to explain to her that there was no way to drive around or over the five cars stopped ahead of us, nor would it be wise to attempt zipping through traffic crossing the street ahead.

Now Suzi has taken up the mantle of trying to help me hurry through gridlock. I’m beginning to wonder how many dozens of times I will have to explain that sometimes you just have to wait your turn. Sigh.

Other annoying moments are really quite innocent on the girls’ part. They simply want me to look at a book they are holding in the backseat, and ask me to "Look, Mom, look!" eighty-dozen times. Or perhaps they want me to solve math problems in my head while we are hurtling down I-75 and a truck driver is deciding whether to let me into the exit lane I need to take or allow me to soar into a mud-filled ditch.

Such is the fun of being my kiddos’ chauffeur.

Way back when I watched Regis and Kelly, and long before I had kids, I heard Kelly Ripa talk about her kids constantly making noise while she drove. She admitted that sometimes she would say, "Mommy can’t talk right know, honey, I’m backing up."

Sounded ridiculous. Until I had kids, or course.

Now I hear myself saying things like, "Patti, I’ll say the states in alphabetical order AFTER I make sure we are going to survive merging onto the freeway," or "I want to get home alive, so I can’t sign your autograph book right now, sweetie."

They never seem to understand, though.

Perhaps the only answer is to take my chauffeur metamorphosis all the way. I’ll put on a black cap and install one of those roll-up, soundproof windows between the front and back seats.

… But it would be just for safety’s sake, of course.

Lori Orlinsky -
Plus some tips on how to get your kids excited about the task.
Read more
Macomb County Education