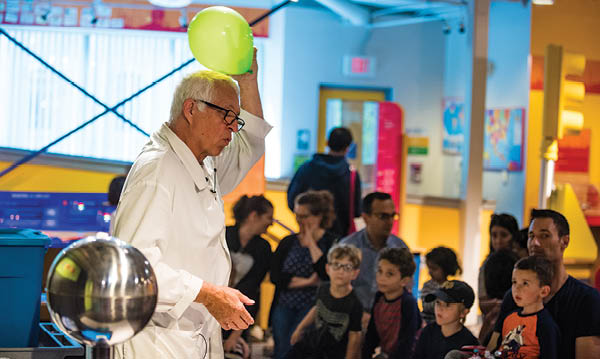 Professor Ray stands on stage at the Ann Arbor Hands-On Museum, dressed in his trademark white lab coat, and rubs a balloon across his cropped white hair over and over again.

An audience of around 20 parents and children look on while he uses the charged balloon to levitate a small strip of foil in the air. As the silver ribbon dances and swirls inches above the balloon – and Professor Ray bobs and weaves to keep it aloft – he explains the concept of electric force.

“I think everybody’s rubbed a balloon over their hair and stuck it to the wall. That’s the force of attraction. Repelling is a little harder to reproduce,” he explains.

Professor Ray, whose real name is Herman Dunwald, does a free series – called Professor Ray’s Everyday Science – at the AAHOM one weekend each month.

The prof at work

The Ohio native and resident has been at the Ann Arbor museum for more than nine years now.

“It’s a great place with wonderful exhibits and a fine staff,” he says. “I was able to develop programs because of appearing there on a regular basis. Even though it’s over 40 miles from Toledo, it feels like home.”

Show themes rotate among 10 scientific topics, including sound, light, motion, buoyancy, chemistry, electricity and magnetism. Each has a catchy title, like “Good Vibes” or “Mind Over Matter,” and emphasizes one main idea, which Professor Ray demonstrates with a series of simple yet dramatic science activities.

Wearing specs and poking through his crates of equipment, notebooks and props, he embodies the role of passionate science geek, sometimes getting so carried away the volume of his wireless microphone soars.

Professor Ray makes pickles light up, safely launch eggs with a broom handle and capture the hydrogen from water to make it explode. For a “Spooky Science” Halloween show, he’ll concoct bloody wounds out of petroleum jelly with red food coloring, tissue paper and cocoa – and make eerie sounds with a howling sump pump hose.

At the heart of his madcap experiments and mad scientist persona is the idea that science is everywhere, and it can be fascinating and fun.

After the balloon demo, Professor Ray floats the foil strip with a Fun Fly Stick, an inexpensive electrically charged wand that can be found in toy stores. Then, he switches on an electrostatic Van de Graaff generator – a large silver sphere poised on a thin metal stand. He invites my daughter, Violet, 9, up from the audience to place her palm on the orb, and the crowd oohs and aahs as strands of her long hair begin to stand on end. Later, he’ll use it to demonstrate the physics of lightning.

Children also are invited to line up and touch a Tesla coil, directing plasma lit with glowing neon and argon gas into otherworldly shapes inside a glass globe.

“Kids that come here and sit in my audience already have an interest in science. They are enthusiastic,” says Dunwald, the father of three grown children and grandfather of five. “I try to show people things they can do at home.”

For example, press a quarter flat into a piece of dry ice (with proper safety precautions and the help of a parent) and hear it “squeal,” or stand it on its end and watch it “shiver.” And create your own low-pressure zone to elevate a pingpong ball with a hair dryer – or try a Styrofoam ball and bent straw.

In his chemistry show, he teaches kids to make their own lava lamps by pouring water, vegetable oil and a bit of food coloring in a clear glass container, then adding an Alka-Seltzer tablet. In “Luminosity,” he suggests observing light refraction by standing some 10 feet away from a window in a darkened room and using a magnifying glass to project the view onto a piece of white paper.

Dunwald spent his career as an elementary and high school science teacher in Oregon City Schools outside of Toledo. On the side, he began doing science shows at COSI, a family science center in Toledo now called Imagination Station.

He enjoyed performing so much that after his retirement in 2001 he went into business for himself.

He says he enjoys the freedom of making science fun without the constraints of the classroom.

“I try to make everybody aware that science is in your life every day,” he says. “Kids come up to me all the time and ask me if I am a real scientist. I always get that question and I say, ‘Yes, and so are you.'”

See Him in Action