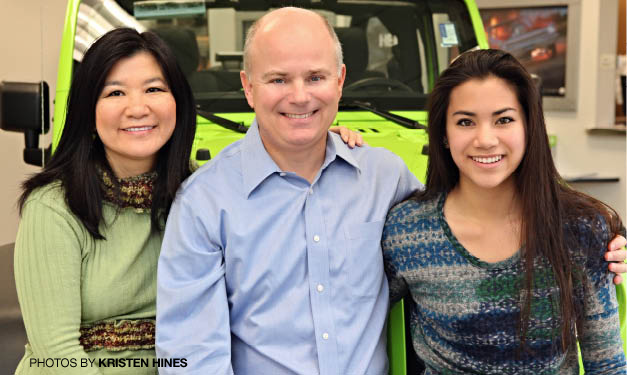 Bob Shuman grew up with cars. Knowledge and love for autos is in his blood. He remembers being 5, playing in the parts department of his dad’s dealership, covered in grease.

Today, the third-generation dealer at Shuman Chrysler Dodge Jeep Ram in Walled Lake carries on the business his grandfather and father started in 1955.

And when he’s not working at the store? He’s helping plan the annual North American International Auto Show in Detroit in January, traveling abroad or hanging out at home with wife Sherry and their kids Ethan, 19 and Hannah, 16.

But most folks know him as “The loud-mouth Shuman guy on the radio,” he cracks – referencing his wacky dealership commercials, complete with “top 10” countdowns and a horn section, which you might hear on your drive to work. “I like to tell jokes, I like to have fun, I like to work hard,” he says. “I think you can work hard and have fun at the same time.”

Although he has deep roots in the family business he runs today, Shuman actually started out as a lawyer. “I went to Michigan State and then Michigan, (and) practiced law with a firm in Bloomfield Hills for 11 years,” Shuman says. “Then my dad was ready to sell the place.”

Shuman, who hung around the family dealership as a kid, left law to take the wheel in 1997. Now, it’s his full-time gig, and it was clearly the right move.

“To be a car dealer, you have to have passion, because we’re here so much,” he says. “It’s not the business to be in if you don’t like doing it – and I love doing it.”

So much, he’s also found time to serve as the 2011-12 president of the Detroit Auto Dealers Association. And he’s been volunteering on the NAIAS committee for about five years now. As vice chairman, he and the other members help guide Rod Alberts, the Detroit auto show’s executive director.

“It is a year-round undertaking to put on a show of the magnitude of the North American International Auto Show,” Shuman says. He travels to auto shows all over the world, too, including Los Angeles; Frankfurt, Germany; Geneva, Switzerland; and Beijing and Shanghai, China – to name a few. Shuman usually spends a day or two checking out what’s new.

Why not take the kids to the North American International Auto Show in January? There’s always a family day – and tons of fun – at Cobo Center in Detroit!

“We can kind of stay a step or two ahead, or catch up if we need to, with what all the other international shows are doing,” he says.

The Detroit show, which started in the early 1900s, is celebrating its 25th anniversary as an international show in 2013, Shuman notes. “It’s been a great learning experience,” he says. “I’ve made so many good friends doing this.” The travel and networking are highlights, but “you are away from home, and you’re away from your business,” he says.

Back in metro Detroit, the Shumans visit the auto show every year. It’s become a tradition for his family, which began in his childhood.

“I have probably been to all but one since I was born in 1961,” Shuman recalls. “I think my mother pushed me through Cobo Hall in a baby carriage. I remember that was just part of January in my family, forever.”

Even his son Ethan was a “car nut” as a kid, Shuman says: Each year, he’d try to sit in every single car at the show. But there’s plenty for kids to enjoy, whether they love cars, like Ethan – or aren’t as thrilled by them, like his daughter Hannah.

“There’s people to talk to, there’s different exhibits to see (and) there’s the people-watching aspect of it all,” he says. And, of course, you could “bribe ’em with lunch in Greektown later.”

The kids both help at the dealership during summers, he adds. Ethan, who’s away studying at the University of Michigan, hopes to work in the automobile industry building cars. “He wants to go into engineering,” Shuman adds, “so working in the shop is good.” Last summer, Hannah, a Walled Lake Central High School student, learned how to “bag-and-tag” cars in the service department, putting bags over customers’ car seats and tagging their keys.

When the whole family has free time, the gathering spot is the decked-out basement. “We have a large train that’s suspended from the ceiling that goes all the way around. And then we have posters or pictures from different places we’ve been,” he says of the homey hangout. The walls are covered with signs that say things like “Jeep Parking Only” and “Chrysler Drive,” and it’s equipped with an Xbox, Wii and a pool table. Other times, Shuman packs up the crew and they board his small plane, which he flies himself as a private pilot. “We’ve gone on some family vacations,” he says, from Mackinac Island to Maine.

“We laugh a lot,” he says. “I think we like to spend time together and we like to do things together.”

Shuman also sits on Walled Lake’s downtown development authority board – and is a financial booster of the music, sports and reading programs in local schools.

At work, Shuman’s office is decorated with family snapshots. He points out the photos of his grandfather and father in front of their dealership – one of him and his father. At the end of the row, Shuman hung a photo showing him with his own son in front of the current dealership showroom.

Car: his Plymouth Prowler, 2000 Woodward Edition
Hangout: home
Dessert: pumpkin pie
Beverage: vanilla milkshakes – hold the whipped cream
Movie: Star Wars movie marathons with his daughter
Readables: any books or magazines about aviation
Music: “Whatever my daughter will let me listen to when she’s in the car.”
Hobbies: flying his small personal airplane on trips with family as a private pilot, playing golf, boating on the lake at the family cottage
Hero: his dad, Richard Shuman
He can’t live without: “I’m a car guy. I’ve gotta have my car! Everyone’s gotta have a car. Two or three – maybe four.”
Share
Facebook
Twitter
Pinterest
Email
Print