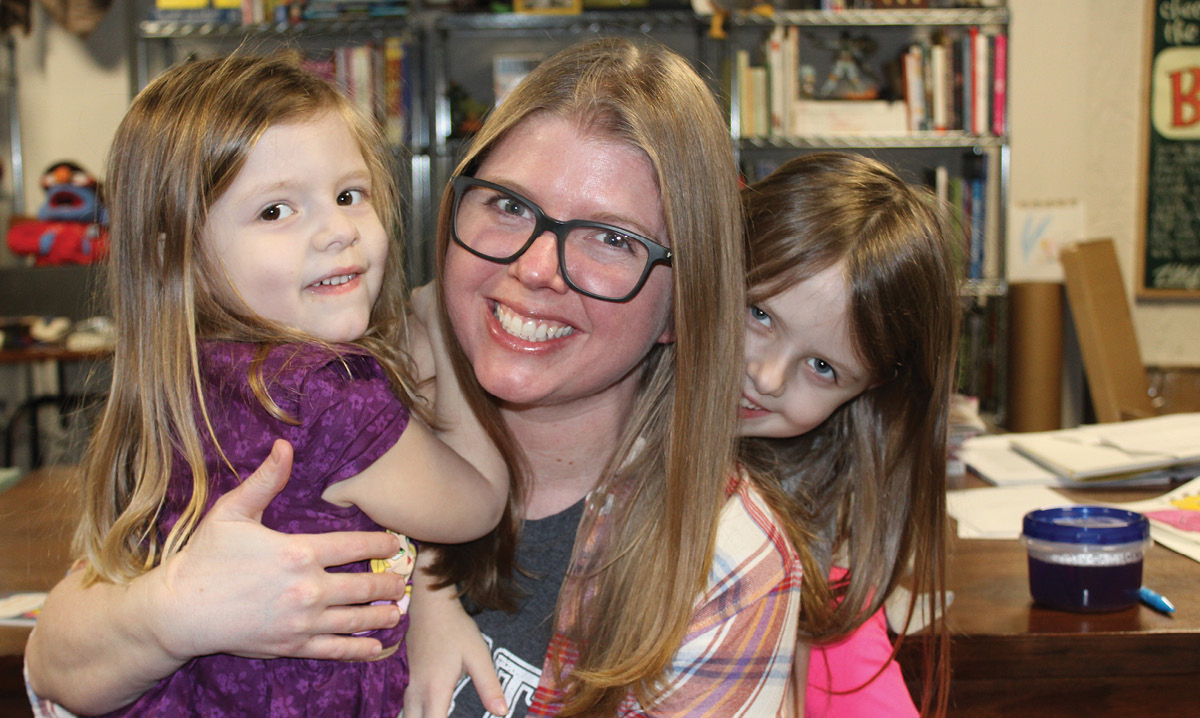 Katie Cook always knew she wanted to be a cartoonist.

“Since kindergarten, I have never had another answer for, ‘What do you want to be when you grow up?'” she says. “I’ve never had a backup plan.” As a senior at Saline High School, when students were interviewed about their future plans, Cook declared she would be the next Charles Schulz.

Now 36 and a mom of two, she’s living the dream – and odds are you and your kids have seen her work.

Working out of a studio in her Brighton home, Cook is an illustrator, comic artist, writer and self-proclaimed “nerd and cat lover.” She’s worked on a wide array of properties, from My Little Pony to Star Wars, and is a fixture at comic conventions across the country, where she signs books and whips up sketches for loyal fans who seek out her dynamic, colorful and cute style.

Cook is also known for her web comic series, Gronk, featuring a green monster too adorable to be taken seriously – and has contributed to so many graphic novels she’s literally lost count.

All this while raising Grayson, 7, and Harper, 4, with her husband, Ryan Wilcox.

Sometimes it can be hard to juggle drawing and deadlines with the demands of being an unconventional work-at-home mom. But with a lot of help from Wilcox, she’s staying sane and gaining name recognition.

“I’ve never regretted it. I wouldn’t change it for the world,” Cook says. “With my first child it was not quite as busy. I stayed home a lot and she was with me all the time while I was expanding, pulling all-nighters.” Then, her second daughter arrived.

“We stuck her in daycare the second you’re allowed to. She came five weeks early and I had work scheduled. I brought stuff to try and draw at the hospital thinking, ‘Maybe I can get this cover done … ‘”

From Saline to stardom

Cook earned a bachelor’s in illustration at Detroit’s College for Creative Studies. While here she honed her skills, hatched Gronk and met Wilcox during a brief part-time stint at the University of Michigan, where he still works.

Their first date? To see animated Pixar flick The Incredibles.

“We’ve been together ever since.”

Upon graduation, Cook designed scrapbooking materials in Ann Arbor until she forged into freelancing.

“I left in a blaze of glory one day and said, ‘I’m going to illustrate comics’ – and almost immediately found out I was pregnant,” she says.

Motherhood coincided with one of her first big breaks: Being hired by IDW Publishing as lead writer for the My Little Pony: Friendship is Magic graphic novel series, a post she held for four and a half years.

Cook even has her own pony character in the books and popular animated show – Bittersweet, a lime green unicorn who boasts glasses like Cook’s and a “cutie mark” depicting a word bubble with a heart in it.

Since then, she has written and illustrated several books, including Drawing Cute with Katie Cook: 200+ Lessons for Drawing Super Adorable Stuff and Nothing Special, a web comic published on Line Webtoon.

She’s now on her third Star Wars book called Search Your Feelings, a companion to her earlier titles for young readers, ABC-3PO: An Alphabet Book and OBI-123 A Book of Numbers.

But this creative mom is perhaps most excited about a set of watercolor and digital works commissioned by Walt Disney World’s WonderGround Gallery, which will be sold in the theme parks and feature Disney attractions like the Haunted Mansion, Snow White, Mr. Toad’s Wild Ride and Trader Sam’s Grog Grotto.

Cook says she became a Disney fan as an adult, and she and Wilcox now enjoy sharing the parks with the kids. This spring break they’re all going on a Star Wars Day at Sea Disney Cruise, where Cook will serve as a guest speaker talking to kids about working on Star Wars and teaching them how to draw Star Wars classics.

“I have to go on a cruise for work, which I find hilarious,” she says.

Cook is just glad her family can share in this trip. Last year, she traveled without them to 18 shows across the country in just 12 months.

“It was insane. I’m going to try not to do that again,” she says. “I’m trying to scale it back this year.”

As her career continues to grow along with her girls, Cook says she’ll try to find more balance. But even when she’s home, it can be difficult.

“There’s kind of a rule you have to ask mommy before you come down to the office to see which kind of mommy you’re going to get,” she says.

It might be the mommy that invites you in and sets up paints or puts on Netflix movies, she says.

“But man, if you get the other mommy, the one that’s on a deadline, the harried, take no prisoners, I-am-on-a-roll mommy … that’s the bad mommy,” she says. “Nobody wants to be around that mommy. My kids can almost tell at this point and they don’t want to go there!”