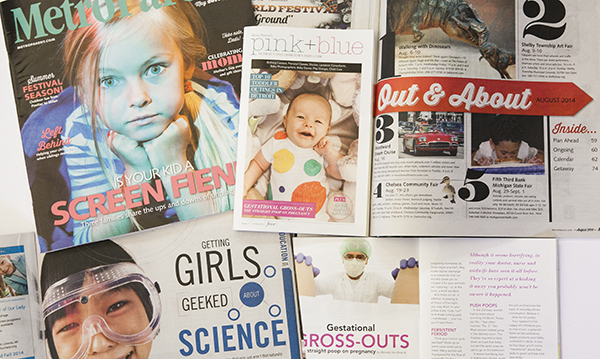 “There’s a lot to like here,” the judges raved of our writing. “A unique and fun visual personality,” they decreed of our design. It’s a level of quality Metro Parent readers have come to love. And we were thrilled that the Parenting Media Association, a national trade organization of regional parenting magazines, agreed at its 2014 Editorial and Design Competition and General Excellence Awards.

Topping the list this year was a gold in “Overall Writing” – for the fifth year running – and silver for “Overall Design” and “General Excellence.” All told, Metro Parent brought home 13 awards at the 2014 PMA Annual Convention, held Feb. 28, 2015 in Baltimore. Other strong performers? Our comprehensive “Education 2014” special section, jam-packed “Calendar of Events,” gripping May cover photo and popular pregnancy/baby “Pink + Blue” ancillary.

We were up against other large-circulation publications in major metro cities like Chicago, Los Angeles, New York, Dallas and Seattle, to name a few. A panel of judges, led by Professor Daryl Moen of the University of Missouri School of Journalism, cast the votes. Here’s the verdict.

It’s all for you

Awards are exciting. But everything we write and design is for you, our readers! We value your opinion most of all. Please share it with us – we value positive and negative feedback – at the Metro Parent Facebook page. Thanks for making Metro Parent the successful parenting resource it is.