From St. Clair Shores to the state capitol, this local mom is pushing for a new law to give kids the protection her son didn't have. 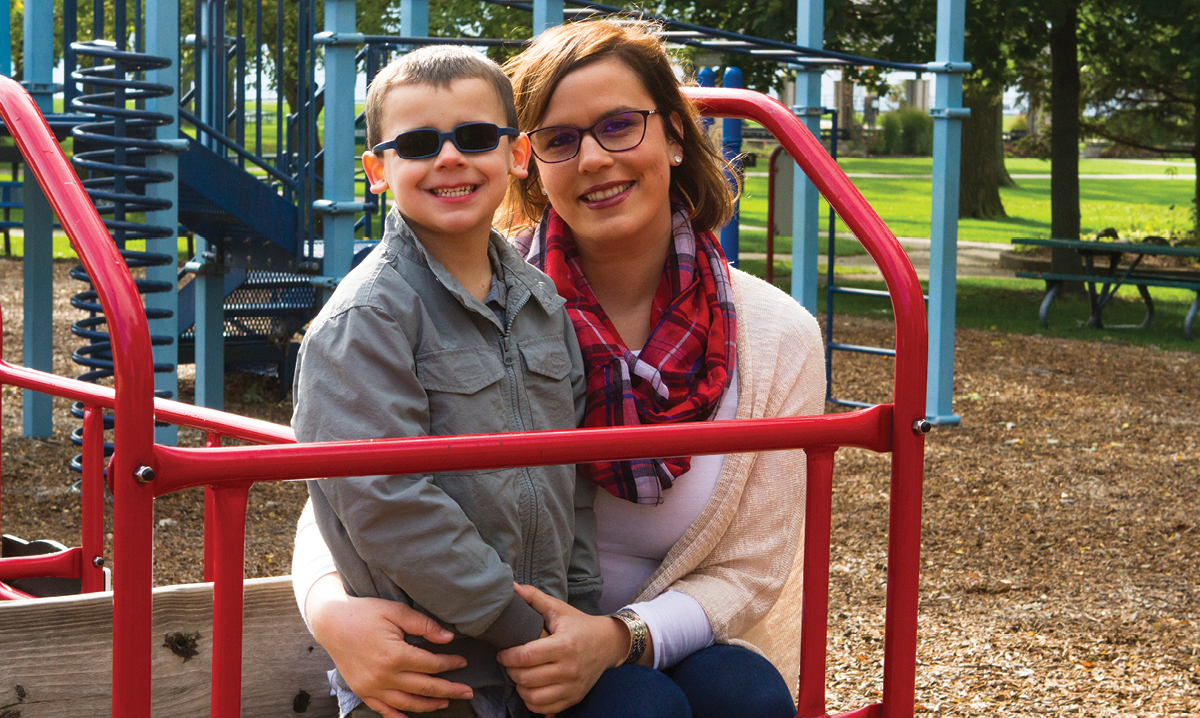 In the midst of a tragedy, Erica Hammel’s path became clear. It was 2013 and the young mother from St. Clair Shores was in the hospital with her 13-month-old son Wyatt, who was facing life-threatening injuries from shaken baby syndrome.

As Hammel learned of the surgeries and difficulties ahead for Wyatt, she also had her instincts confirmed about the person who almost took her son’s life. It was her ex-husband’s girlfriend, who Hammel had already been nervous about but had no proof was a risk. Now that police were involved, she found out that the woman who was alone with Wyatt that night had been convicted twice of child abuse in the past.

“My instincts were right. She had been convicted in 2011 of third-degree child abuse and she got probation and fines, and she was convicted again in 2013. It took her just over a week (after that) to get her hands on Wyatt,” Hammel says. “How is it that people who sexually abuse children have to register but people that physically abuse children can just walk away?”

Still in the ER, she asked one of her son’s doctors that very question. “Does that make any sense to you? Don’t you think we need some sort of registry?” The doctor’s response is one that Hammel now hears frequently: “That doesn’t exist already?”

Sadly, it doesn’t. “People don’t realize this does not exist,” Hammel says. “I knew immediately I had to do something.”

That “something” is called Wyatt’s Law, and it’s finally making headway toward being passed in Michigan. The package of bills would require anyone convicted of child abuse to be listed on a searchable, public registry.

“The law is really well written, it’s very cut and dry. You would have to be convicted in a court of law to be on this registry,” Hammel explains. “It’s not something CPS puts you on. You’re not just charged with it.”

Creating new legislation is a painfully slow process, she has found, but there’s hope ahead.

“My bills are still sitting in the House. I’m really confident next year will be our year,” Hammel says. “I never knew how hard it was to get something passed.”

Yet some oppose Wyatt’s Law, including the American Civil Liberties Union, which Hammel says has concerns about registries and “stigmatizing” child abusers who have already served their time.

“What about my child? She gave Wyatt a life sentence,” she says. “Our state’s in a crisis. Child abuse is up 30 percent in this state. In 2016, there were over 39,000 confirmed cases of child abuse. It’s consecutively increased every year for the last five years.”

Knowledge is power, she says, and parents can’t protect their children if they don’t have access to this type of information. Though she had Googled the woman her ex-husband was dating, Hammel had no means of discovering her abusive past without having at least a date of birth.

“If we can’t keep these people behind bars, we as parents, guardians and grandparents should know who’s around our kids – boyfriends and girlfriends, obviously, but I’m even talking beyond that like if you want to hire a babysitter,” she says.

Implementing the law would come at a cost to the state of Michigan, she acknowledges, but it’s nothing compared to the medical costs paid by families and Medicaid for severe abuse cases like Wyatt’s.

“He’s disabled for the rest of his life. I work part-time now. All his insurance is through the state and he gets therapy every week,” Hammel says, pointing out that the state pays an average of $2.6 million for a lifetime of care for a victim of shaken baby syndrome or abusive head trauma. “He’s completely blind in his left eye and he is cognitively and developmentally delayed. Again, had I had this piece of information (about his abuser), I have no doubt I would have been able to prevent this from happening.”

Advocating for Wyatt’s Law has become a years-long crusade for Hammel, now 30, who often travels to Lansing to meet with legislators. She’s grateful for a strong support system in her hometown of St. Clair Shores, where people recently banded together on a project to rebuild her and Wyatt’s home that was badly in need of repair. When she has free time, Hammel enjoys martial arts – a positive outlet for negative energy, she says.

As for Wyatt, the 6-year-old Mickey Mouse fan had the time of his life during a recent Make-A-Wish trip to Walt Disney World (“He loved it, loved it!”) and mom describes him as a loving, happy boy.

“I really can’t take him a lot of places but he’s a very happy, lovey-dovey kid,” Hammel says. “He loves his school, loves his therapy and he loves playing outside. In the summertime, he loves to swim. That’s his favorite thing to do in the world.”

Wyatt’s progress is incredible given where he was five years ago, but he’s been forced to re-learn everything he once knew. “That first year of his life was completely erased.”

That’s why Hammel will never stop fighting for Wyatt – and all children at risk without a child abuse registry in place. “I’m not going to stop until it passes.”

How to get involved