Are you and your spouse financially incompatible? Dollar drama doesn't have to cause family strife. Here's advice and tips on how to work on money problems in marriage. 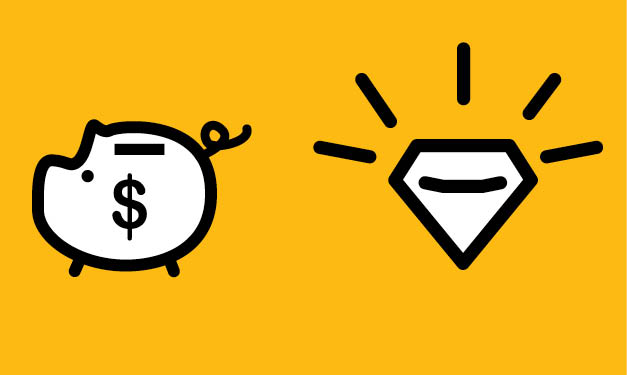 Jane steps into Meijer armed with a detailed grocery list. Her family is on a tight budget now that her husband John’s work hours have been cut back and her own part-time gig have disappeared. A year ago, she wouldn’t hesitate to buy whatever she wanted at the grocery store; now she keeps track of every purchase. After buying meat and produce for her family’s meals for the week, she spies a sale on toys. Lately, she and John hadn’t been buying any extras for the kids.

They’d both agreed to keep their spending to a minimum and focus on essentials like food to avoid splurge buying, but that was always easier for John. The holidays are only a few weeks away; she figured she could save now by buying her two children gifts. I won’t beat 50 percent off, reasoned Jane. At the checkout counter, Jane’s bill comes to twice what she’d expected – and budgeted. Instead of returning the toys, or even planning on talking to her husband about her purchases, Jane drives home hoping that maybe she’d pick up a few hours of work soon – or that John would – before her credit card bill appears in a month or so.

Jane and John could be anyone. And their family’s circumstances could be that of many Michigan families experiencing money problems in marriage. Often couples may have been together for years without really talking about or understanding each other’s financial styles. When budgets are loose and jobs are plentiful, the discussion about spending sometimes slides. Yet as families are cutting back their budgets, the discussion – and sometimes arguments – about spending follows.

“Money is a volatile topic full of misunderstanding and mismatched values,” explains Sally Palaian, a psychologist in Bingham Farms who often counsels couples on spending. Even if couples have not had problems discussing finances in the past, Palaian says, “with the economic downturn, many people are reverting to old patterns. They’ve lost their sense of security. And when people are fearful, all of their coping mechanisms come into play.”

Following in your parents’ financial footsteps

“Everyone comes into a (marriage) with financial baggage whether they realize it or not,” explains Gail Cunningham, a spokesperson for the National Foundation for Credit Counseling. “Most people either follow the financial patterns of their parents or they do a 180 and act completely differently. I hardly ever see something in between.”

The consensus among financial experts is that how you were raised determines to a great degree how you spend later. “Often you see people who were raised by savers, they felt very secure and comfortable, so they went on to be savers, too,” says Cunningham.

The reverse is true, as well. You could have children raised by savers who go on to max out credit cards – and children who react to their parents’ spendthrift ways by becoming budget conscious.

Complicating the money lessons for children: “For most people a generation ago, they were not accustomed to having conversations about money,” notes Cunningham.

Why spenders and savers attract

There’s another dimension to learned financial styles: Even though you might have followed your parent’s fiscal example and you save money diligently, you might not marry a like-minded spender.

Surprisingly, research from Scott Rick of the University of Michigan’s Ross School of Business reveals that fiscal opposites attract. Generally, you would expect that you would look for a spouse with similar financial styles, but Rick found just the opposite to be true.

“We tend to be attracted to mates who share similar demographic characteristics, similar attitudes, similar values, even similar names. But our surveys of married adults suggest opposites attract when it comes to emotional reactions toward spending.”

While the reasoning for this financial mismatch is still unclear, Rick theorizes that when it comes to marriage partners, we may be looking for a complement rather than a perfect match. In other words, if you’ve always been a tightwad, you might be intrigued – and attracted – to someone who spends freely.

On the flipside, the spendthrift, who’s always worried he’s spending his money without thinking about a budget, might crave the financial stability of a saver.

Whatever the reason, Rick’s research brings up an important point for couples: If you find that you’ve married your financial opposite, you’re not alone. And just maybe your spouse’s differing financial style can become an asset rather than a source of frustration.

If you’ve found you and your spouse’s discussions about money have become more heated recently, maybe it’s time to take a step back and figure out your financial styles and work toward becoming more compatible.

So if you’re already a fiscal mismatch, is there any hope for balance? Yes, cooperation is key in any good partnership, especially marriage, says Palaian, who’s also the author of Spent: Break the Buying Obsession and Discover Your True Worth.

“You need to understand yourself, understand your spouse. You need to try to understand why it’s important for a spouse to continue with a childhood pattern.” Then, both partners need to work toward shifting their own thinking and finding common ground. “Both people need to take responsibility for their own behavior, where it comes from. Then understand that their way of being (and spending) isn’t the only way.”

Even in the most solid of relationships, Palaian says the process of coming together on finances is “difficult to do.” And even more complex “if the relationship is already strained.”

After you’ve figured out your own spending style, and devoted some time figuring out exactly where those habits come from, ask your partner to do the same; then set a date to talk about your financial future.

Palaian advises you set a date and time to discuss finances, whether that’s weekly, biweekly or monthly. These meetings should be in a comfortable environment, but not necessarily at the home office. If you tend to get heated during your discussions, opt for a public place like a library or coffee shop where you’re less likely to become too upset.

Palaian even suggests to some couples that they write letters first before they meet in person. “Some just aren’t able to talk about it in person at first.”

Wherever you chose to talk, make sure you listen to what your partner has to say. Try mirroring back his or her statements if you don’t think you understand your partner’s point of view. Or if you don’t feel like your partner lets you have enough time to explain your thoughts, get a timer.

These strategies might seem elementary at first glance, but for many couples that enter Palaian’s office, she says she spends more than half her time “just as a traffic cop” making sure each partner gets a chance to talk.

Palaian also points out that kids can benefit from seeing mom and dad talk rationally about finances – but they shouldn’t have to witness parents fighting over and over again about money. If you know your money talk might end up heated, all the more reason to move it out of the house. You can even to ask a trusted friend, religious leader or seek out a professional to help you navigate a financial truce.

Although this process of becoming a stronger financial team may be difficult in the beginning, ultimately it can strengthen your marriage. “When financial difficulties come, it can be good for a relationship,” says Palaian. “Partners are forced to work together.”

When it comes to how to manage money in marriage, she goes on to suggest that couples should not only work on their finances as a team, but they also should try to complement their money discussions with other activities, so that they learn to work together and enjoy each other more. For example, go on a walk or rent movies from the library to watch with each other.

Coming together about your finances won’t happen all at once; it’s an ongoing process. Some days you might be better at talking openly and honestly about your financial feelings than other days.

Do you think you and your spouse are financially compatible, or has budgeting and spending become a problem in your household? Has this information been helpful?