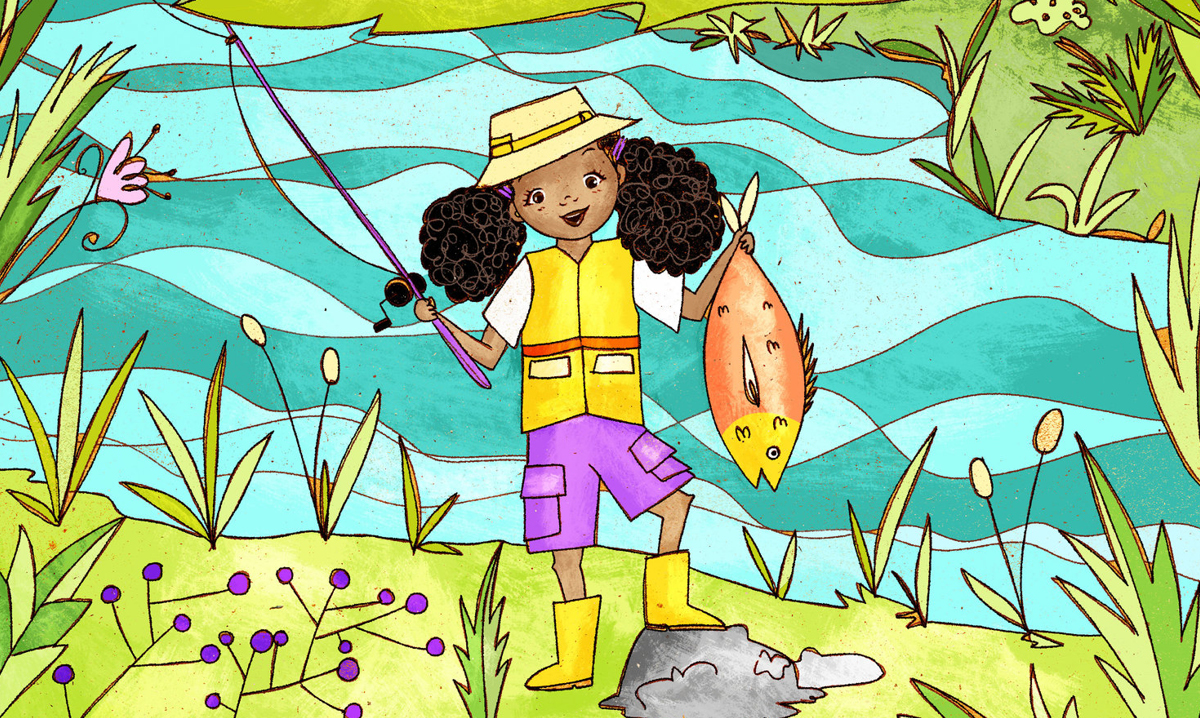 Author Jadel Davis had just finished delivering her 2017 commencement speech to MSU’s graduating class when she was inspired by parents to write Nadia Goes To The Great Fishing Hole.

As a woman of color in chemical engineering, this Detroit resident drew inspiration from her own path – and created this story of the great fishing hole. Instead of literally writing a step-by-step journey about her path to becoming a chemical engineer, though, Davis decided to write a story that symbolizes the lessons and obstacles she overcame – without focusing too much on the need to be an engineer.

A different way to STEM

“I love STEM, but I’ve also seen parents with good intention place a lot of pressure on their children to choose lucrative or ‘smart’ STEM careers as a way to put them on the right path,” Davis says. “I didn’t want the book to be used like that. So, the book focuses more on fostering the behaviors and character to make it in the STEM field and not solely on the STEM field itself.”

The tale focuses on a sharp 9-year-old girl who’s also from Detroit. Nadia catches wind of a new fishing hole and sets out to explore it. She faces some doubt and scary obstacles along the way – but, ultimately, she forges ahead to learn about an amazing ecosystem of fish she never would have discovered without her curiosity.

Davis says her goal is for the book, which is geared at ages 5-9, to provide youth with agency and encourage them to take risks that will enable them to find their interests at an early age.

At first, Davis says she had no clue how to approach publishing a children’s book. She says she was so overwhelmed and intimidated by the process that it took eight months before she did any actual work or research.

Everything changed, though, when she found a children’s author in STEM who was willing to coach her on how to self-publish a book.

“After that, I had like a roadmap,” Davis says. “She had done Kickstarter and told me all of the pitfalls and all of the good things about Kickstarter. So I went that route just to get funding and also (spread) awareness. Then, after that, she told me how she self-published, formatted her book and found an illustrator. Then, I did those things. Having another person again supporting you and being open and transparent, we were able to make this a reality.”

She launched a Kickstarter in February of 2019, which garnered her support from 146 backers from over 20 states and two countries. By April, she hired an illustrator and by July Davis was ready to start selling the first copies of Nadia Goes to the Great Fishing Hole for $13.99 under her organization, Mirror Project.

Mirror Project provides youth with exposure opportunities in hopes of connecting them with their passion, she explains.

“The impact has been greater than I ever thought it was going to be,” Davis says. “I thought I was going to write this book and that was going to be it. And then it snowballed into something bigger and bigger.” Most recently, she decided to create and sell a coloring book along with the book for an extra $2.

“Instead of having the character just set in stone, I let people color in the characters so they can see themselves in the book. I just really wanted to give kids agency that I think sometimes we forget (to extend).

To buy Nadia Goes To The Great Fishing Hole and the coloring book visit the Mirror Project site or shop on Amazon.