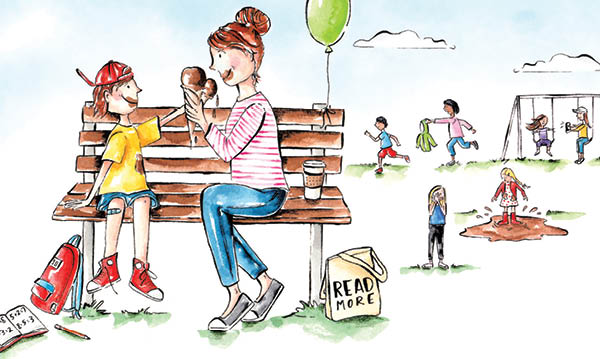 Kym Richert, a mom of one in Clinton Township, put motherhood on the back burner when she first got married.

“My husband and I got married in our late 20s and we postponed having children because we were in the height of our careers,” Richert says.

Richert was at the top of her game in a male-dominated IT field and thought she’d have all the time in the world to have children. But then, when the couple felt established enough to start a family, they hit some roadblocks.

“At 32 it didn’t happen, 33 it didn’t happen. At 34, we started seeing specialists,” she says. “All the money we saved to have kids went into fertility doctors – needles, drugs, support groups. It kind of backfired on us, and it was kind of sad.”

Then, at 38, Richert’s miracle baby arrived.

For Shannon Oliver, a mom of 3-year-old twins from Jackson, a series of events – a failed marriage, some personal struggles and two miscarriages – stood in her way of motherhood. But at 43, Oliver and her second husband welcomed twins with the help of an egg donor.

While both women had their children beyond the age of 35, which is considered advanced maternal age, both say there were benefits to having kids later in life.

“I had time in my life to kind of prioritize or re-prioritize what was important to me,” Oliver says.

In Denmark, where the study was conducted, the mean childbearing age has increased since the ’70s, hitting 30.9 years old in 2015. Like here in the United States, women are postponing childbearing for higher education and careers.

“The majority of Danish children are now born to women who passed 30 years of age, and the proportion of children born to mothers aged 40 or above has quadrupled since 1985,” the study notes.

Researchers took a look at a sample of 4,471 moms from the Danish Longitudinal Survey of Children to see what this pause on pregnancy meant for moms and their children.

“I’m a calmer parent,” she says. “I think I am a much kinder parent. I still discipline my kids – they get the appropriate consequences,” such as time out or redirection.

Richert says her age has brought her more patience to deal with her son’s behavioral issues in school. He’s advanced for his age and gets bored in class. Richert doesn’t get hysterical about his difficulties and instead says she’s able to sit calmly and talk to her son about staying focused in school.

Still, there could be some perks to having children at an older age. When you’re in your 30s or 40s, Bushey adds, you’ve had more experiences and know yourself better than when you’re younger.

Part of knowing yourself, though, is recognizing whether or not you truly want children – something both Richert and Oliver knew all along.

“If you’ve waited until 40 because you are not sure you want children, that could be a problem,” Bushey says, because many women in their mid-30s or even 40s get set in their ways and could have a harder time adjusting to motherhood.

Before having a child, Bushey says you have to ask yourself, “Are you mentally ready to do what needs to be done to set an environment for your child that is kind, loving and teaching your child what they need to know in a kind, loving way?”