Parenting on Trial: The Impact of ‘Mom Shaming’

Judge not? No one got the memo. A new local poll shows most moms are 'shamed' for their parenting decisions – and it has a big impact. Here's how to deal. 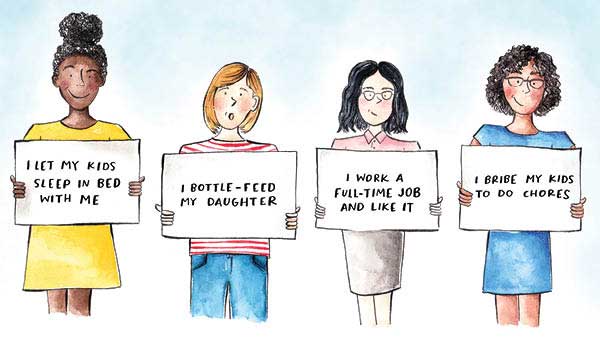 It might begin with an eye roll over breast-feeding, a snide remark about going back to work or an unwelcome comment about baby’s sleep habits.

It’s our induction into the world of mommy guilt; the first of many criticisms that leave us second-guessing, doubling down or just feeling defeated.

Like most moms, I know the feeling well. It gets easier to brush off with time, but unexpected attacks still take a toll.

Once, an older woman watched me struggle in the grocery checkout with a crying baby and overtired toddler and then verbally lambasted me in the parking lot about how my two-under-2 needed to be spanked.

My experience isn’t unique, of course, and that’s confirmed by a new poll on “mom shaming” from the University of Michigan C.S. Mott Children’s Hospital. It surveyed 475 mothers of kids ages 0-5 and found 61 percent have experienced such criticism for how they parent. Worse, about one in four said they’d been criticized by three or more groups of people.

“A majority of moms have had this happen to them,” says Anna Kauffman, the Mott web editor and Ann Arbor mother of two young children who suggested the poll topic. “I think this is something we hear a lot about anecdotally, but there hasn’t really been any research to understand what’s going on or why.”

While mothers responded in various ways – some sought out more information on the topic to double-check their decision, others became more resolute about their choice and some went to a health care provider for advice – one point was especially problematic.

“Some people just became unsure,” Kauffman says. In fact, 42 percent of moms polled said they felt uncertain about their parenting choices due to shaming. “That was a really big concerning point.”

Another unfortunate effect? About half of moms said they started to avoid the people who were most critical – often, close family members.

“I think people typically have good intentions and are trying to help,” she says, though that doesn’t make the judgment any easier to handle. “I do think that feeling judged can have a very negative impact.”

Harsh criticism can be especially tough on new moms who are just gaining confidence in their parenting skills and often still going through trial and error. “It can feel really scary when you’re just figuring it all out,” Greenhut says.

But there’s an upside to the poll. About 56 percent of mothers who’ve experienced mom shaming said it made them stop criticizing other moms.

“They thought, ‘I experienced this and I don’t like it. I’m not going to do that to other moms,'” Kauffman says. “I would hope that these results would help moms both not feel alone and feel a little bit more protective of each other.”

Putting an end to mom shaming is personal for Kauffman, the mother of two girls ages 1 and 4. She felt it most when her younger daughter started day care and was frequently getting sick.

“I kept getting comments, ‘Well, if you didn’t send her to day care … ‘” Kauffman says. “It’s comments that have this undercurrent of blame that I find the most hurtful. That was a situation where I was exhausted enough from having a sick kid for months. I didn’t need to have a backhanded comment about my professional decisions.”

Her advice for people close to moms of young children? Practice empathy before you weigh in. Better yet, just be there for support and encouragement.

Simply offering a helping hand is also preferable to unsolicited advice. “When people make these comments, they sort of discount that moms are putting in a lot of effort to make good choices,” she says.

It also ignores the fact that there’s no right or wrong answer for many parenting issues.

“Remember that every child is different and every child is going to benefit from different styles of parenting,” Greenhut adds. And for moms facing judgment? “You can respond in a kind, calm and assertive way,” she says.

Beyond that, try to find a support system of trusted friends who can relate. Focus on developing your own self-confidence as a mother, Greenhut says, “and know that it’s a journey.”