Parents Pass Down Their Car Brand Preference to Kids 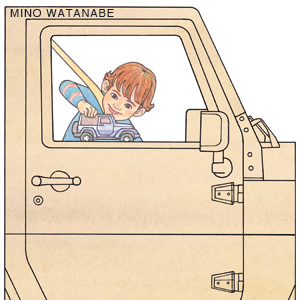 Michigan is home to the Motor City, so it's no surprise that many Michiganders share a longstanding love of the automobile.

The car craze culminates annually in January as Detroit welcomes the North American International Auto Show to Cobo Center – where car enthusiasts young and old gather to gawk at the latest car designs.

Whether you opt to purchase one of the Detroit Three brands or have a taste for the imports, your choices in cars actually impact your child's future car purchases. That's right: Moms and dads pass their brand love to their offspring, according to new study The Intergenerational Transmission of Automobile Brand Preferences: Empirical Evidence and Implications for Firm Strategy.

"If my parents buy a Ford, I'm more likely to buy a Ford than the average person," says Soren Anderson, the assistant professor of economics at Michigan State University and co-author of this study.

In fact, a child is 39 percent more likely to choose the same brand as his parents than a child whose parent did not choose that particular brand.

The researchers obtained the bulk of their data from the Panel Study of Income Dynamics, also known as the PSID, which kicked off in 1968. This long-running survey, conducted by the University of Michigan, collects information from 8,000 to 9,000 homes every other year – on odd years, says Ryan Kellogg, associate professor at U-M's department of economics and another co-author of the study.

The researchers for the PSID follow the households and any new descendents, so if your grandparents were included in the survey, then your parents were – and now, your household is part of the study. And when your children move out, their households will be surveyed, as well.

In the late '90s, detailed information on car ownership was collected – which was something that had not been done up until that time – and from that information, Anderson says, "we're looking at correlations in the brands of cars people choose."

Anderson and Kellogg, along with co-authors Ashley Langer and James M. Sallee, studied the data for 2 to 2 1/2 years. The crew examined their data from a manufacturer level, which was divided into seven brands: Ford, GM, Chrysler, Honda, Toyota, other Asian and European.

"Every time we saw a household buy a car, we looked and saw what sort of car their parents purchased," Kellogg says.

From there, the researchers tried to look at things a little more closely – examining incomes, education and regions where the surveyed people lived. Because Ford and GM are so similar in their offerings and features, the authors took quite a bit of time comparing the two brands.

"By looking at that (information), that helps sort of narrow the choice down. People are really picking a brand," Kellogg says.

According to the study, children have contact with their parent's cars and actually develop a taste for the "minor design details or nostalgic childhood associations with a brand." Plus, they may have more knowledge about that particular brand as a result.

What does this mean for automakers? Well, brand loyalty, known as intergenerational brand preference, is just one of the factors that impacts their market shares, Kellogg notes. So while automakers will undoubtedly continue to advertise their cars, this brand loyalty has a lot to do with sales, and that is something Kellogg doesn't see changing anytime soon.

If you want to join the fight to help end gun violence, start with these organizations.
Read more
Tweens & Teens

It's totally natural but can be an uncomfortable thing to address with your son. A local expert offers advice on how to handle boys' wet dreams.
Read more
Health

Brought to you by Oakland Community Health Network
Read more