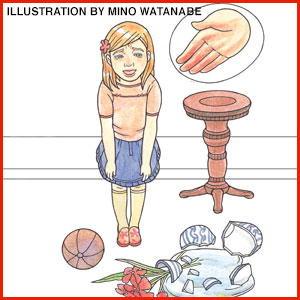 Kids will mouth off, throw fits at the grocery store, skip their chores and much more. And, depending on the offense, parents typically have different ways of disciplining their child. Or do they?

Parents are spanking their kids for trivial reasons – just 30 seconds into an argument, a new study says.

“Parents these days are pulled in so many different directions, and especially in Michigan, with our still-high unemployment rate and continuing financial crises, they are at the end of their ropes,” he says. All these stressors lower frustration tolerance, Robin says. And, as a result, they’re striking their kids out of anger, which in many cases is a learned behavior.

“I hear about spankings from many of my patients. I usually find that it is part of their value systems – their parents did it to them, and they are going to do it to their children.”

The study, titled Eavesdropping on the Family: A Pilot Investigation of Corporal Punishment in the Home and published in the Journal of Family Psychology, evaluated audio recordings of 33 families over six evenings. Moms agreed to wear audio recording devices to capture the family dynamics in action. During that time, researchers discovered 41 incidents of corporal punishment.

Parents were often angry at that moment – and spanking wasn’t used a last resort for serious behavior. Plus, in 73 percent of cases, kids acted up again within 10 minutes.

This kind of punishment has negative effects on your child’s emotional state, Robin says. Short term, spanking can lead to fear, anxiety and withdrawal.

Robin, who does not advocate spanking, works with families to find positive ways to resolve issues and discipline children.

“We now have a number of well-researched, evidence-based parent training approaches that parents can learn on their own or with the help of psychologists and other trained mental health professionals,” he says.

Robin suggests parents read Your Defiant Child or Your Defiant Teen, which help parents create a positive environment with their children, teach them how to give commands, use incentives before punishments and more.

When working with families, the first thing Robin stresses to parents is that children are opposing someone – which means there are two people involved. Parents are the second party in the conflict, and they must participate in finding a solution to the family conflict.

Robin suggests increasing positivity with one-on-one time. Invite your child to do an activity of their choice for 20 minutes per day, four times per week if possible. Let the child direct the activities, which could be as simple as shooting hoops or going for a bike ride.

“Break the negativity by showing the parent and child that they could experience each other as fun,” Robin says.

Then, combine praise, ignoring and commands, he says. Find five additional reasons to praise your child, ignore – or don’t make an issue out of – minor incidents, and make short, simple commands, such as, “Go to bed” or “Clean your room.”

Creative positive incentives can help with your child’s behavior, too. Robin suggests behavior charts with stickers for younger kids and a contract with some sort of reward for teens – if they behave according to your rules.

“It’s a set of tools,” Robin says. “You have a toolbox of parenting tools, and we’re going to give you some new positive tools in the toolbox instead of spanking.”

And when it comes to punishments for fighting, disrespectful language or any other big offense, Robin says to try timeouts for children under 10 – and for teens, taking away use of electronics for 24 hours, for example.

Avoiding corporal punishment takes effort from both parent and child. By working together – or with the help of a psychologist, families can limit physical punishment.

“A peaceful society starts in the family. If we want the next generation of our children to creatively solve the worlds’ problems, we have to be teaching methods other than aggression.”